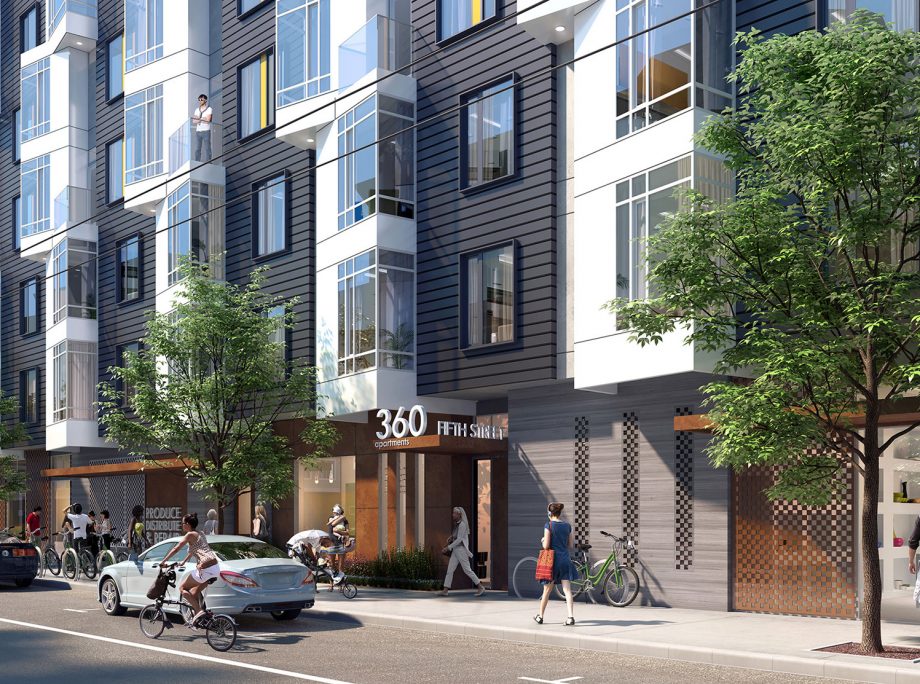 360 5th Street – Developer ramps up with second SoMa housing project, but could sell it

Developer Trammell Crow Residential won approval for its second housing project in San Francisco’s South of Market, but could sell it.

Bruce Dorfman, senior managing director of Trammell Crow Residential, said he has received unsolicited bids from other developers to buy the site. Dorfman declined to identify the potential buyers or price, and he said no deal has been finalized. A potential buyer is interested in building condos, while Trammell Crow Residential had planned to operate the building as rentals, he said.

“We think there’s still a dearth of new product in San Francisco,” said Dorfman. “I think we have a wonderful location. It’s a very walkable community. The completion of the central subway will only approve accessibility in that area.”

At 360 5th St., architect KTGY focused on the street level design. Ground-floor residences will have separate entrances and stoops directly on Clara and Shipley streets. Most new apartment buildings have a single lobby entrance.

The retail and PDR portions of the project are also in the ground floor. The project will replace existing two-story commercial buildings and a parking lot. It includes 18 affordable apartments, or 14.5 percent of the units.

The facade includes protruding windows that are reminiscent of the older buildings’ bay windows. “It’s trying to be a modern twist on a classic San Francisco bay window,” said Musick. The pattern changes on the fourth and fifth floors, which open up with outdoor balconies for the units.

Dorfman said Trammell Crow Residential has been working with Suffolk Construction on 360 5th St. as well as 975 Bryant St. but hasn’t finalized a general contractor.

KTGY also designed the 2330 Webster St. project in Oakland, and a portion of the Alameda Naval Base Site A project, which is approved but has faced financial hurdles. Trammell Crow Residential and its partners are developing that project. Dorfman declined to comment on it.