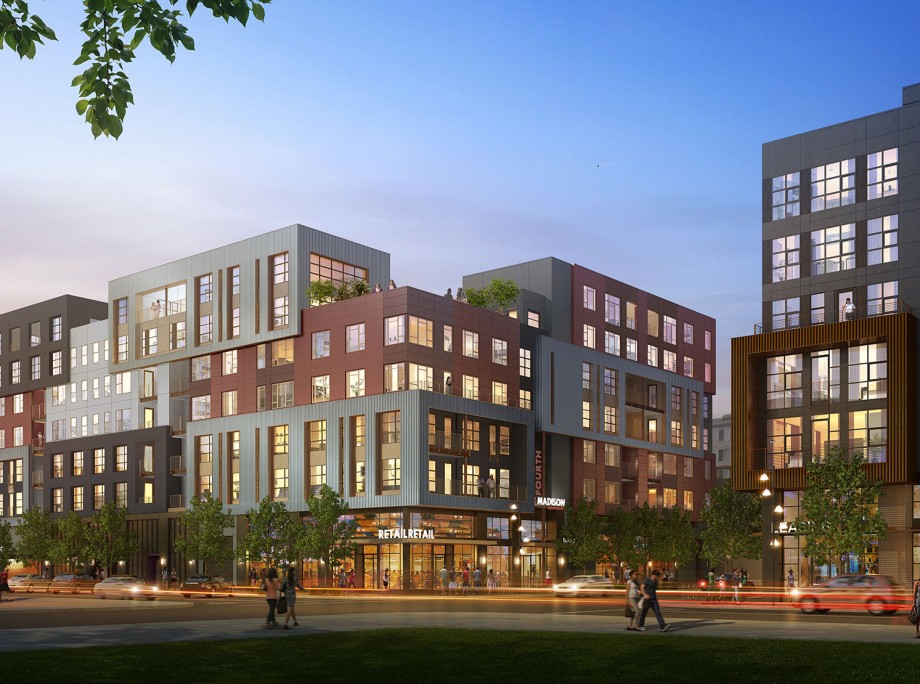 A proposal enthusiastically endorsed by the Oakland Planning Commission promises to bring housing, jobs and a big dose of vibrancy to the Jack London Square District.

“Oakland needs more housing, and this is the exact right place for it,” Savlan Hauser of the Jack London Improvement District said at a recent commission meeting where San Francisco-based developer Carmel Partners and Oakland architects KTGY presented their plans.

They intend to build 330 rental units atop high-ceiling retail space on a block and a half at the district’s eastern end, between Jackson and Madison streets. The Cost Plus headquarters between Fourth and Fifth streets will be demolished, despite its historical value as a relic of the waterfront, and both it and the parking lot across Fourth will be replaced by seven-story buildings.

“The current use is not particularly active,” Hauser said.

“It may be a contributor to a historic district, but it is not a contributor to active, vibrant neighborhood life. This is going to be especially concerning when it’s vacant, so we encourage the project to move forward,” she said.

Cost Plus, absorbed by Bed Bath and Beyond in 2012, already was planning to vacate the premises, Carmel’s Greg Pasquali told the commission. The Cost Plus building’s historical value had been mistakenly described in earlier discussions, city planner Pete Vollmann said. It is not, in fact, part of the district’s area of primary importance.

Areas of primary importance appear eligible for the National Register of Historic Places, according to the city’s website.

The staggered roofline of the building set to take its place elicited descriptions of it as having “boxcar”-like qualities in its design. It’s slated to include 240 housing units in its seven stories. Carmel’s second building for the project, on the parking lot, is bolder, invoking the containers at the Port of Oakland in its irregularly stacked rectangular components that jut out to break up any sense of blockishness in the building. The building would include 90 housing units.

Not counting the 66 lofts that offer space to be used at renters’ discretion, such as home offices or an extra bedroom, 40 percent of the other units are two- or three-bedrooms, giving the property a family-oriented aspect. That is a marked contrast to the micro-units that have become common in tech era housing developments and, as Commissioner Jahmese Myres commented, “don’t actually serve the existing residents of Oakland.”

“I like the design of the building a lot,” she said.

Construction will require 623 “job-years,” the developers said, a figure derived from estimates of construction labor costs divided by an annual salary of $61,500 per worker.

Rob Stoker, president of the Building and Trades Council of Alameda County, asked about the developer’s assertion of being open to using union labor. He told the panel that from what he’d seen of initial discussions with various contractors, “things are moving in the right direction.”

The business of operating and maintaining the property once it’s built would provide a couple of dozen jobs at least, Carmel’s Pasquali estimated.

Among the other benefits the project’s proponents touted are an estimated $13 million in one-time taxes and fees, such as $3 million in transfer tax, $1.3 million in school fees, $3.35 million for permits and $3.75 million for water and sewer.

The developer also plans to spend $300,000 to $600,000 improving the intersection of Sixth and Jackson streets, perhaps adding a left-turn signal to relieve the traffic bottleneck there.

The developer increased street-level retail by 50 percent after neighborhood discussions and earlier meetings with the Planning Commission and the city’s Design Review Committee and Landmarks Board, architect KTGY’s David Senden said.

“Every corner has something going on,” Senden said in describing how Carmel sought to meet the challenges previous retailers and retail space developers have had in the neighborhood. Key spaces have 20-foot-high ceilings.

“We’ve seen the challenges in retail in Jack London Square,” Isaac Abid, of HP Investors on Hegenberger Road, told the commission. Besides being “pleasantly surprised” by Carmel’s increasing the retail element, he said, the residential component will help bring the critical mass required to support neighborhood businesses.

The parking structure entrance also was shifted from Third Street to Jackson, Senden said, creating a more “interesting, dynamic pedestrian experience.” The site, across from the recycling center Lakeside Metals, is three blocks from the Lake Merritt BART station.

“It’s rare to see a project this large not have a lot of people up in arms about it,” commission vice chair Adhi Nagraj said. “Overall, I really like the project.”