International award-winning KTGY Architecture + Planning announced today that it has been selected by OC-based Civic Partners as the designer of Artisan Alley at The Diamond, a unique retail development located in Lake Elsinore, a city in western Riverside County.

Situated across the street from the Lake Elsinore Diamond Stadium, the proposed project capitalizes on the current craft brew craze. Artisan Alley will offer a variety of craft breweries as well as complementary non-traditional food offerings and retailers. Plans call for 95k sf of retail/restaurant space and a 130-room hotel on 11 acres at the northeast corner of Diamond Dr and Malaga Rd. “Inspired by the repurposing of old industrial sites, the architectural design will echo the warehouse roots of many craft breweries and art collectives with its varied textures and simple forms,” said Simon Perkowitz, AIA, PE, principal of KTGY’s Retail Studio in Irvine, Calif.

“The buildings shelter a communal plaza, reinforcing the concept of a community of artisans and encouraging pedestrians to linger and browse,” said Perkowitz. “Outdoor patios wrap around the breweries to further soften the divide between inside and outside. Warm brick and distressed wood temper corrugated metal and steel accents, offering a neutral background for the wares and artistry of the tenants.” 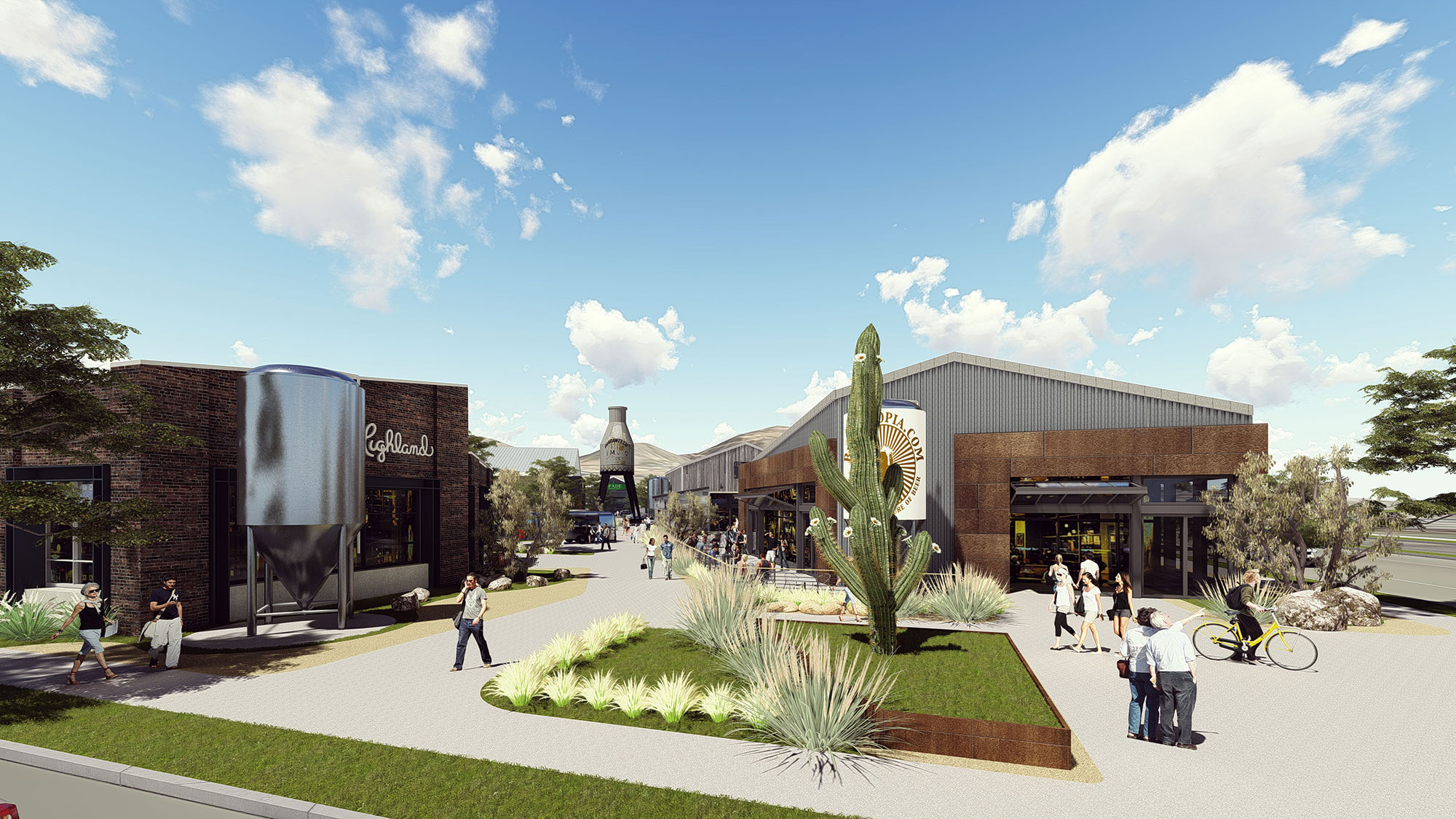 Perkowitz adds, “We want to create an immersive experience for those that come to Artisan Alley and that first starts with creating a sense of place. Artisan Alley will offer experiential retail, restaurants and craft breweries with outdoor seating, places to gather and relax, plenty of shade, awnings, meandering walkways, landscaping and lighting elements, which all contribute to the ambiance and an enriched customer experience. We want this to be a multi-sensory experience with social interactions that are incredible. We feel that Artisan Alley will be what is next in retail.”

Lake Elsinore is one of California’s fastest growing cities and with a natural freshwater lake about 3,000 acres in size, the city offers an abundance of recreational activities drawing nearly a half million visitors to the city each year, says Jeff Pomeroy, PE, vice president development with Civic Partners. “We think that this project fulfills a tremendous need in this community, both for residents and visitors. We are very excited about this project and look forward to beginning development on Artisan Alley’s first phase,” added Pomeroy. According to Pomeroy, the project could reach the Planning Commission and City Council in October. Artisan Alley would be built in two phases, the first phase being the construction of a 7k sf restaurant building, 21.5k sf of brewery space, 11.2k sf for retail, and a 6.7k sf pad building for restaurant and/or shop space. With the necessary approvals and tenant commitments, the first phase could commence in early 2017 with completion by year end.