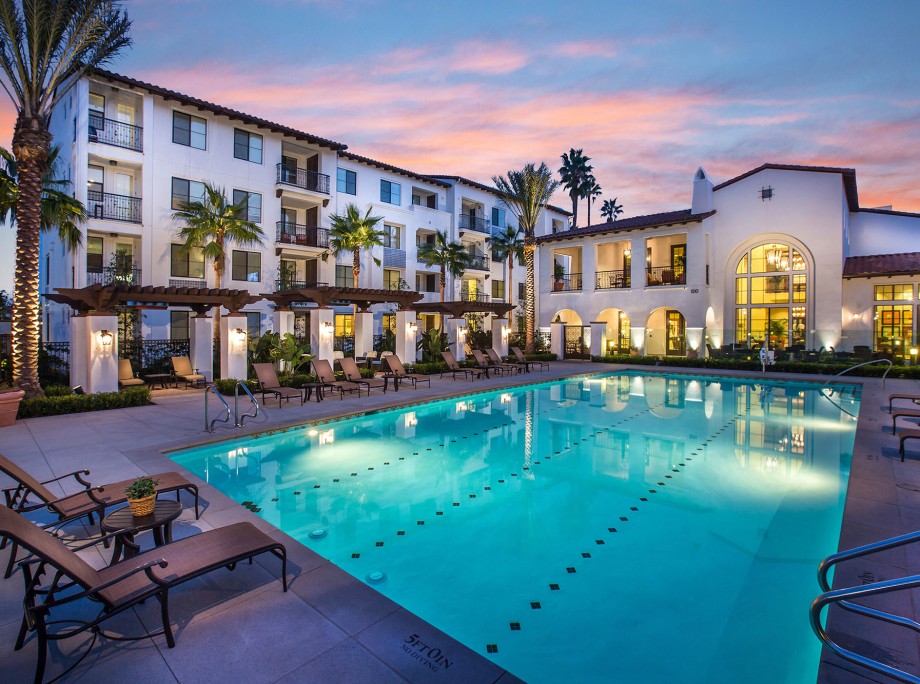 For a market that is no stranger to new real estate development, Azulón at Mesa Verde had an unusually welcome reception when it was in the planning stages of its recent senior living project in Orange County, California.

The 55-plus community was first envisioned in 2008 by longtime, family-owned real estate development company M.V. Partners. And while the company has completed dozens of retail, commercial and other projects over the years and has worked through the accompanying community meetings that come along with them, this one was met with barely, if any, opposition.

Not bad for a company that hadn’t launched a multifamily housing project in more than 30 years.

And as the company’s first 55-plus development ever, the Azulón at Mesa Verde is 99% occupied and with renewals even better than expected.

The development went fairly smoothly from groundbreaking to today, a success that its owners credit largely to a team of consultants who are expert in building and designing for the aging population, including Irvine, Calif.-based design and architecture firm KTGY Group.

Azulón at Mesa Verde is situated in the active Southern California community of Costa Mesa. Nearby waterfront access as well as a wealth of shopping, dining and entertainment options position the greater community as a desirable place to live.

The Azulón site was originally home to an entertainment center including movie theaters and parking, adjacent to a shopping plaza filled with local amenities: a regional grocery store chain, hair and nail salons, restaurants and more.

The original property did not have any debt associated with it, and M.V. Partners first began to envision the project in 2008—right on the heels of global financial crisis. Given the economic situation, the project was held and did not ultimately break ground until 2012, giving the team a crucial window to do the project right.

“We had the luxury of doing the due diligence we needed,” says Jeff Reese, project manager at Costa Mesa-based M.V. Partners. “We surveyed every 55-plus project in Orange County, and some in San Diego. We had the time to be thoughtful and diligent to make sure we incorporated the best and avoided any weak points.”

The original vision was for a walkable community that would serve as a possible downsizing option for local residents. Its proximity to area destinations was a strong selling point from the get-go, as was the buy-in of the community, who was familiar with the development company because of its other projects in the vicinity.

“Particularly because we are directly connected to the retail center, residents can access the grocery store, CVS Pharmacy and all the services in that center,” says Susan Sirota, who leads marketing for the community. “They don’t have to get in their car. They don’t even have to walk through a parking lot.”

Following the lengthy due diligence process, construction broke ground in mid-2012. The community opened in December 2014 and was fully leased within 12 months. Even through construction delays, a temporary leasing office was established in the adjacent retail center to maintain interest among prospective residents. Before the project’s completion, 72 units were pre-leased. Today, the 220 units are 99% occupied with renewal rates that are better than pro forma.

No development is without its challenges, and while the construction of Azulón was relatively smooth, there were a few modifications made throughout the process.

First, the site’s adjacency to the shopping center meant that a truck delivery route would cross the walking access to the center. The development team negotiated with the grocery store anchor tenant to rework the route so that walkability would remain high.

Second, the design featured many corners and “ins and outs,” which left unused space in some areas. As an afterthought, the team decided that the remaining space could be put to good use—as on-site storage for the residents.

“We felt a lot of our residents might be downsizing, and they might have extra items. It could be holiday decorations, a surfboard—a lot of things,” says Reese. “Rather than to have to rent a storage unit, this is now on-site where they live.”

It has also provided a new and unforeseen revenue opportunity for the owner.

In integrating the construction into the community, the designers were also mindful of neighbors. A residential community in close proximity expressed concerns about the four-story portions of the building, and whether residents of Azulón would be able to see into the properties of the nearby neighbors. Additionally, the design considered street traffic and the surrounding area, says Jeff Anderzhon, FAIA, senior planner/design architect for Eppstein Uhen Architects and a judge on the 2015 SHN Design Awards panel.

“The architects sited the project in a manner that hides the automobiles behind the main building and gives a streetscape that is very appealing,” he says.

Other planned features include a saltwater pool, which doesn’t require storage space for chlorine or other chemicals, as well as a two-story clubhouse area with a state-of-the-art 4K high-def television.

The project was highly amenitized, which was a goal of M.V. Partners. But the design ultimately reflected an appropriate scale, says Dan Cinelli, FAIA, managing principal at Perkins Eastman and a judge on the design awards panel.

“The interiors matched the expectations of what the outside of the building looked like,” he says. “I like the scale of it. It feels intimate, with a lot of nice natural light.”

Near 100% occupancy and a better-than-expected renewal rate of 95% have led the project team to celebrate its success.

The community, because of the thorough upfront research, considered potential problems before they arose, Reese says.

All units, which span both 1- and 2-bedroom floor plans, include at least one walk-in shower, for example, keeping the aging resident in mind. The entire building is pet-friendly, and is non-smoking—a decision M.V. Partners initially thought might turn off some residents, but which ultimately served as a selling point for new residents who say they love the rule.

The completed community also includes features and finishes that give it a broad appeal to the community at large. Some portions of the building are four stories, whereas others are just two stories, so that neighbors do not feel residents of the community can see into their living spaces from the fourth-story windows. The design also acknowledges a busy thoroughfare that is nearby, and limits the window exposure to that street.

The decision to preserve heritage trees from the original site was also made. This involved boxing and maintaining the trees during the construction process and replanting them into the community once it was finished.

“From an aesthetic standpoint, it has a good basic Southern California vernacular design and it fits well within the community of Costa Mesa,” says Anderzhon.

“What set it apart for me is its location with regard to community amenities that residents might participate in,” he says. “It’s adjacent to a shopping center that includes a food store and restaurants. This makes sense if you’re providing senior living housing services.”

While M.V. Partners does not have any immediate plans to develop again in the 55+ category, the owners are happy with the success of the project and agree it was a “right-fit” for the community and for those who live in Azulón.

“If you give the right product in this demographic, [the residents] are probably not going to be compelled to move,” Reese says. “It’s a very stable resident mix and we like that.”