Ben Kasdan – The Quick Ascent of Mass Timber in Multifamily

Why your next tall apartment project may be built from wood. 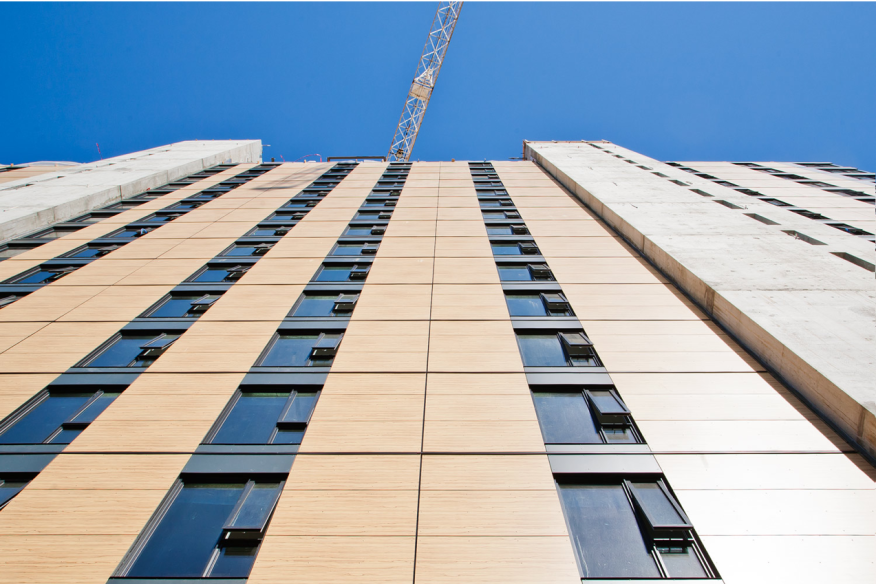 Ben Kaiser knew he was onto something when space in Radiator, his mass timber office building in Portland, Ore., leased up faster than he expected. As owner of Kaiser Group + PATH Architecture, and a tenant of the building himself, he noticed there was something more than just the high-tech amenities or location that were drawing people to the building.

“It really kind of broke open a long, pent-up demand for natural materials used in Class A office buildings, residential structures, and commercial areas,” says Kaiser. “So it really sparked in us the realization the demand was there in the market.”

With that spark, Kaiser and his team designed, developed, and served as general contractor on Carbon 12, a 14-unit condominium project in Portland’s trending Mississippi District, which, at eight stories and 85 feet, is the tallest mass timber building in the U.S. completed to date.

Using mass timber posts and beams that click together similar to prefab steel with male-female connectors for its structure, with prefabricated, cross-laminated timber (CLT) panels that covered 400 square feet each for the floor decks, Carbon 12’s framing went up in just eight weeks, with the entire project reaching completion within one year. “We put up a floor a week,” says Kaiser. “No one can match that in concrete.” 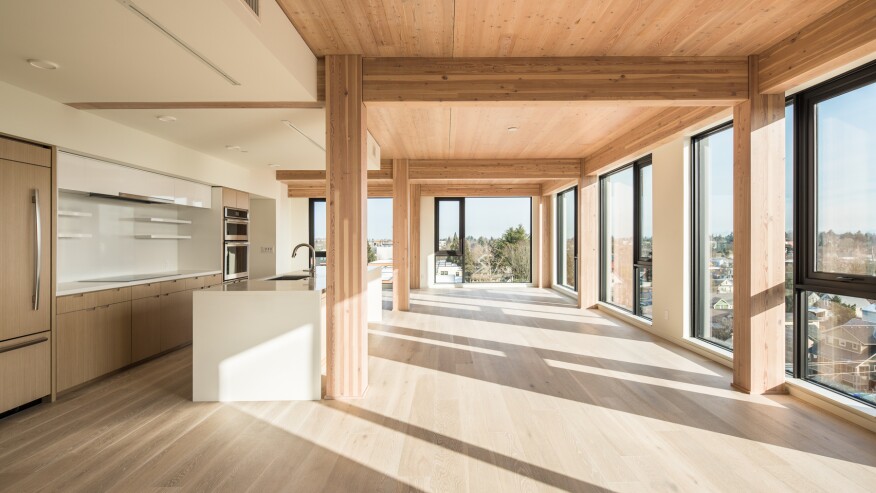 Since mass timber structures weigh just 20% of comparable concrete buildings, he was able to pour a less massive foundation, which also helped speed his timeline. Because the floors were ready to use without waiting for concrete to cure, HVAC, electrical, and mechanical tradespeople could go in immediately once the floors clicked in place to do their jobs. And he did it using fewer workers, with just five or six people needed to put each floor in place.

Not only did the use of mass timber help Kaiser get to market quickly, it also helped him sell the units once he did. While the for-sale condo market in Portland has slowed and some projects have pivoted back to being for-rent lease-ups, Carbon 12 is 60% sold. Kaiser attributes the resilient sales pace, even in the face of a lagging market, to the nature of the building itself—literally—with its exposed mass timber beams, walls, and floors.

“Millennials and Gen Zs don’t want to be in concrete boxes anymore,” Kaiser says. “These buildings lease up and sell quicker than we ever imagined, because people are looking for truth in materials. Mass timber is the solution that’s hidden in plain sight.” 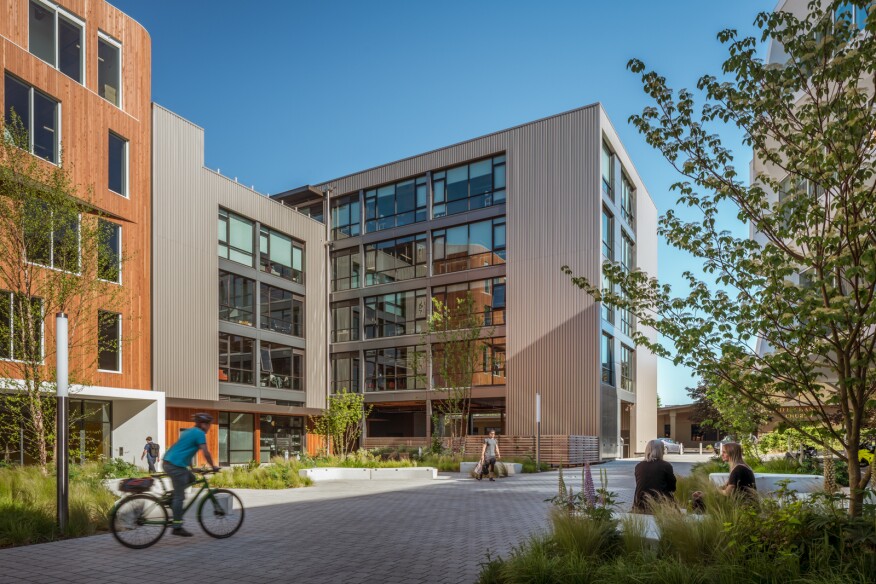 Kaiser’s experience with Radiator and Carbon 12 is an example of the increasing trend of developers turning to mass timber for both commercial and residential projects. There are already 221 modern mass timber buildings in existence or underway in the U.S. today, according to WoodWorks, with another 378 in design, for a total modern mass timber footprint of 599 buildings. While leading-edge projects, such as Carbon 12, still pencil at about 5% higher costs than concrete, proponents say the material will become more cost effective quickly, given its rapid adoption.

Reintroduced to North America in its modern form in just the last decade, mass timber components are manufactured out of smaller pieces of wood that are glued or fastened together to create larger, stronger members that can span wider spaces. In CLT timbers, those pieces are joined together at perpendicular angles, increasing the material’s strength in multiple directions. And because it’s made out of smaller pieces of wood, trees take just six to eight years to grow large enough to be used in the mass timber manufacturing process, which uses far less energy than concrete or steel. At the same time, mass timber buildings actually help lessen the amount of carbon released into the atmosphere by sequestering carbon within the wood itself.

Fast, Eco-Friendly, and Beautiful
Professionals who have worked with the material say the click-and-play nature of mass timber components, coupled with the sustainable and natural appeal of wood when going to market, makes it a formidable choice in development today.

“You’re really using the structure as the ornament of the building,” says Ben Kasdan, associate principal at Irvine, Calif.-based KTGY Architecture + Planning, who’s currently working on a 12-story mass timber student housing project in Oregon. “You can use mass timber as the finish of the building up to a certain height, and not necessarily cover it up with other materials, which produces a savings.”

New Codes = Taller Wood Buildings
Until now, unless specifically allowed in states such as Oregon, which adopted new codes in 2018 to permit tall wood buildings over six stories, developers had to apply for variances to go higher. But that is also changing, as recent amendments to the International Building Code (IBC) mean the 2021 version will allow for tall wood buildings up to 18 floors. There’s already one that fits that bill: the University of British Columbia’s Brock Commons Tallwood House dormitory, which at 18 floors is currently the tallest mass timber building in North America.

Challenges Remain
For all its momentum, hurdles to mass timber’s more widespread adoption still exist. One is the perception of fire risk. But, in fact, mass timber tests that helped get the 18-floor tall wood building allowances added to the IBC showed mass timber can have better fire-resistant structural properties than steel. While steel starts losing structural integrity at temperatures as low as 450 degrees, timbers develop a char on the outside, while maintaining their internal structural strength much longer.

“Mass timber buildings can actually be safer in a fire than steel,” says Andrew Schuster, principal at Syracuse, N.Y.-based Ashley McGraw Architects, which is working on a mass timber apartment project in Syracuse. “Wood maintains its structural integrity, even at high temperatures.”

Other challenges include a still nascent supply chain, especially on the East Coast. Kaiser likes to point to the fact that while there are over 1,300 ready-mix concrete suppliers in the U.S., there are still just a handful of mass timber manufacturers. Finding workers who are familiar with the material can be challenging, too. “Every single conversation, you have to explain it all over again,” Kaiser says. “You have to say, here’s what it is, here’s how it works, and here’s why we’re doing it.”

But for Kasdan, those challenges are slight in comparison to mass timber’s advantages, especially given the shortage of labor in the construction industry. “It seems like our clients can’t estimate escalation costs high enough today,” Kasdan says. “But more of the mass timber components can be built in the factory, which means you need less skilled labor in the field.”

For Schuster, the rise of mass timber in U.S. development today reflects an intersection of aesthetic appeal, environmentally conscious design, and practical workability in the field.

“I just think it’s kind of the perfect convergence,” Schuster says. “You’ve got the environmental and practical aspects, as well as the fact that exposed wood is the hot, attractive aesthetic of the moment right now. Combining all of those things makes it incredibly appealing.”