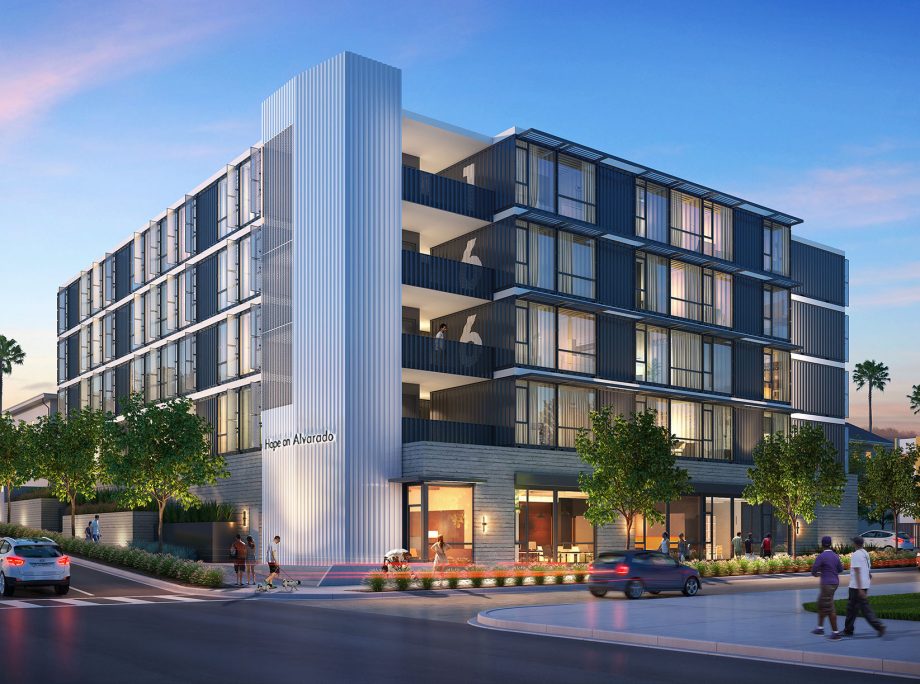 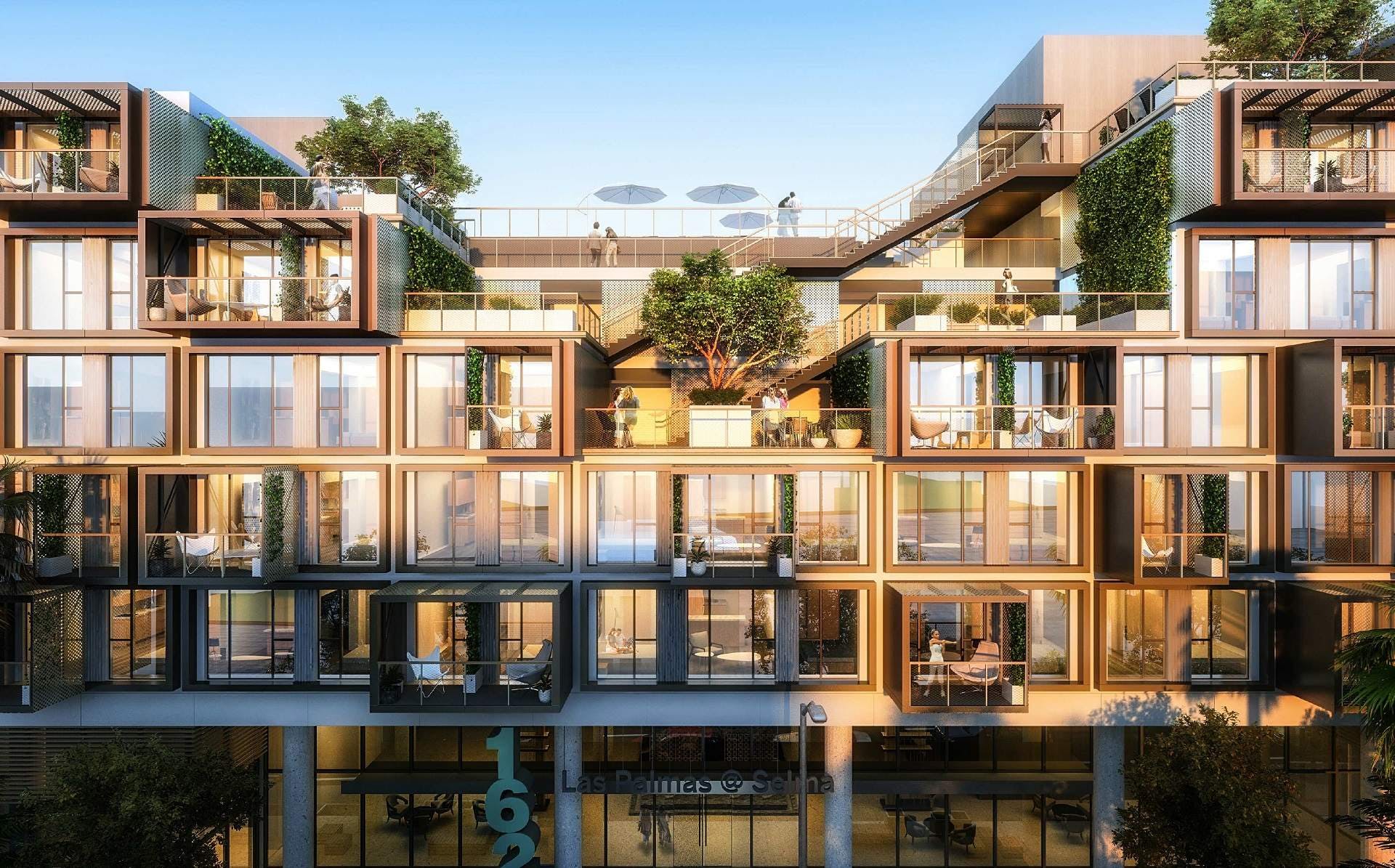 Across Los Angeles, architects and developers are embracing factory-built multi-family housing construction across a variety of projects. A selection of recently proposed and currently under construction efforts highlight the fact that while previously limited mostly to single-family projects, modular construction is increasingly being used for larger projects. 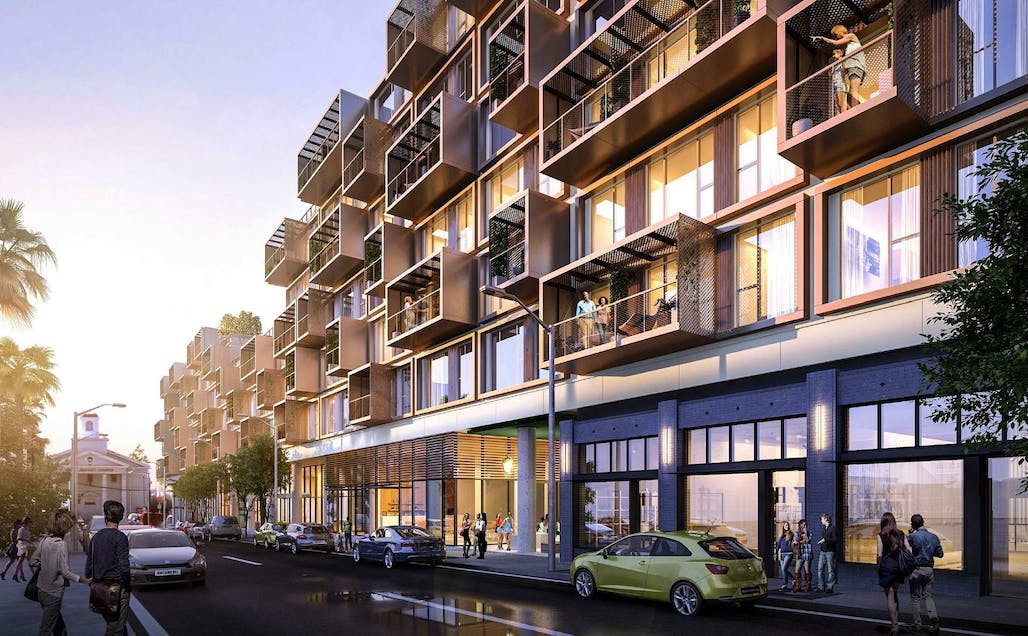 The development is marked by balcony modules that overlook street-level retail. Image courtesy of Steinberg Hart.

The project, set to be located on a long, narrow site, will feature 14,200 square feet of ground-floor retail spaces as well as apartment units marked by projecting covered balconies arranged to express the project’s modular construction systems. Urbanize.LA reports that the project will bring a mix of one- and two-bedroom homes to the 28,000-square-foot site, including 69 affordable housing units.

The project is the latest modular construction project proposed in the region, where escalating construction costs stemming from a widespread labor shortage are pushing developers to embrace factory-built buildings in order to save time (and money) bringing their projects to life.

View of the Hope on Alvarado development. Image courtesy of KTGY Architecture + Planning.

In the nearby MacArthur Park neighborhood, for example, Hope on Alvarado, an 84-unit transitional housing complex designed by KTGY Architecture + Planning is currently under construction.

The project, an outgrowth of the firm’s R+D Studio, utilizes prefabricated “shipping container”-style components as a basis for its modular design. For the project, the architects are fabricating new container chassis components rather than re-using existing containers. The arrangement allows the construction team to work more effectively. Keith Labus, project architect for Hope on Alvarado, said via the KTGY website, “We’re working with manufacturers and converting the containers into residential units right in the middle of the manufacturing process. It’s more efficient and it can be done much faster, so we can deliver more units quicker.” 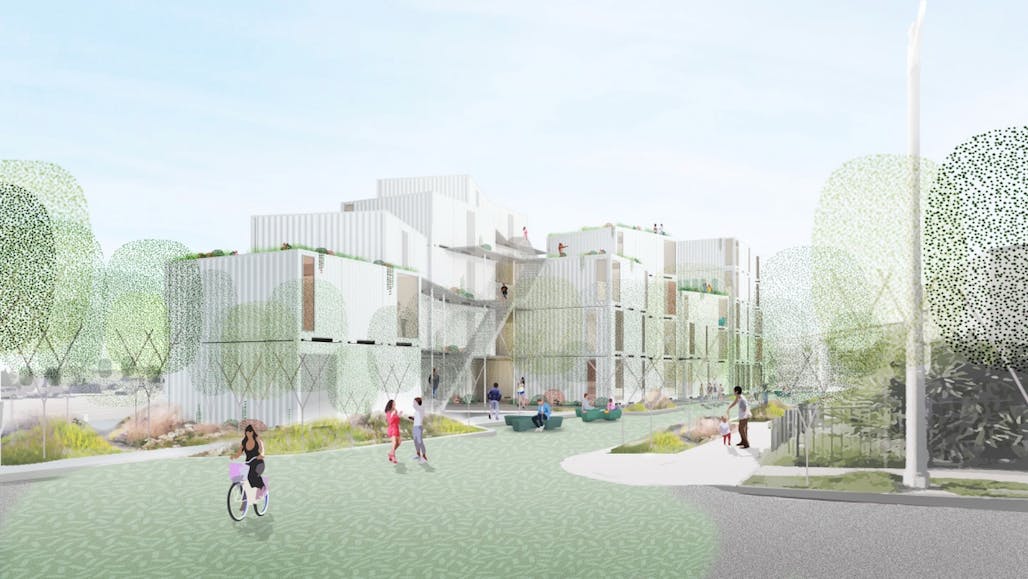 Rendering of the Isla Connections project that utilizes modular elements to occupy a highway-adjacent scrap of land. Image courtesy of Lorcan O’Herlihy Architects.

A few miles southeast from Hope on Alvarado, Lorcan O’Herlihy Architects and Clifford Beers Housing recently broke ground on their Isla Intersections project, a 54-unit modular development taking shape on what was once a leftover railroad right of way.

The 35,000-square-foot project uses welded assemblies of shopping containers to create 20-foot by 16-foot studio apartment units containing ADA-compliant kitchens and bathrooms. On the project site, which is located adjacent to a congested highway intersection, the modular units are stacked and twisted to create a sheltered courtyard that will house a marketplace and public plaza.