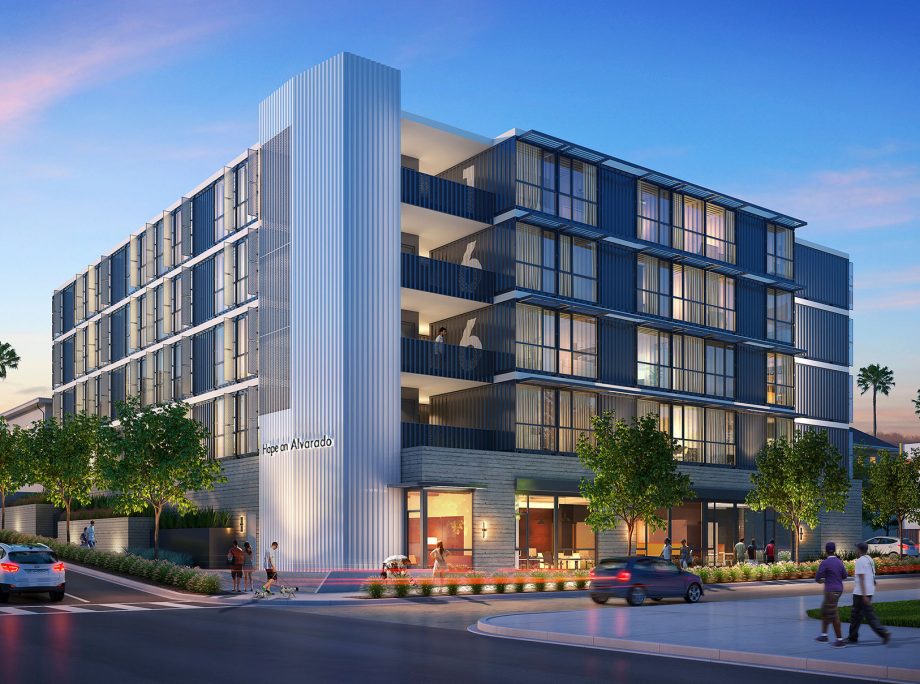 Mercy Housing is developing the 70,000-square-foot project. TCA Architects is the designer, and Suffolk Construction is the builder.

Once completed, the six-story property will have 94 permanent supportive housing units for low-income households.

There will also be ground-floor commercial space, parking, a community room and supportive services provided by The People Concern.

Construction on the building is expected to wrap by March 2022.

The project is using modular construction, a technique in which the foundation and other prep work is done on-site while units are manufactured elsewhere. Once completed, the pieces are assembled at the job site. This process generally decreases the length of time needed for projects.

Tom Donohue, president and general manager of Suffolk Los Angeles, said the company has worked with prefabricated units before.

Donohue said the company works with the manufacturers of the prefabricated units so that when they arrive at the site, it “comes together like a Lego set, and we are able to put it together on site very quickly.”

“We’re going to work hand in hand with the prefabricated modular builder. We’re going to want to make sure that all of that is coordinated so that when we do put that together, the systems work,” he added.

The prefabricated units are built in a controlled environment, Donohue said. And because they come together quickly and uniformly, the process saves time and money. It also produces less waste and enhances worker safety, he said.

And there could be even more benefits in the long run.

“As the industry starts to do this more and more, you are going to start to see the prefabricated costs come down as we scale up,” Donohue said.

Irvine-based KTGY Architecture & Planning has also used factory-made shipping containers in affordable housing projects, such as Hope on Alvarado. It is one of a handful of supportive projects the group is working on with Aedis Real Estate Group Inc.

Venice-based Office of Mobile Design has also used modular design in its projects. And Giant Containers Inc., which has an office in Playa Vista, is a global supplier of fabricated shipping containers.

The group has worked on more than 20 projects in Los Angeles.

Factory-made shipping containers, which can be designed into homes or storefronts, are considered manufactured housing.