Downtown Superior’s Main Street, a walkable mixed-use development being developed by Ranch Capital and Morgan Holdings in Boulder County, is set to add a mixed-use component. It is being designed by KTGY Architecture + Planning and will be built by Colorado First Construction.

“One of CFC’s big challenges will be managing the flow of the work so that emergency access is maintained during construction and areas of the project can be turned over in phases that separate end users from construction activities, all while keeping foot and vehicle access free and open to the Sports Stable and other businesses,” said CFC’s Sean Smith.

KTGY’s designs will contribute to a “dynamic, vibrant” downtown neighborhood and establish a sense of place along the new Main Street, between Marshall Road and Superior Drive. KTGY is the architect for 10 residential, four commercial and four mixed-use buildings encompassing 382 residential units and over 70,000 square feet of commercial, retail and restaurant space.

Inspired by the area’s rich coal mining history, the new mixed-use community boasts a dynamic blend of materials, including brick and black metal. The composition and materials will make the new development feel as though it has evolved over time, according to KTGY Principal Terry Willis, AIA, LEED AP, based in the firm’s Denver office.

“The architectural style is a blend of traditional and modern tying the new development to the surrounding community while elevating the aesthetic,” Willis said.

On the north side of Main Street, a five-story apartment building with structured parking sits adjacent to retail spaces. A landscaped paseo runs as a central spine between the apartment building and the parkfront restaurant terminating the northern end of the paseo, connecting the residential units to the retail plaza. The central plaza, which will serve as the public town square for the town of Superior, opens to Main Street and engages the first-floor commercial uses along its sides. An iconic stand-alone retail building anchors the public plaza at the hard corner of Superior and Main Street, further invigorating the new development and activating the public space.

“The development team wanted to create a destination that attracts people from all over and provides for the needs of the residents and its daytime population,” Willis said.

According to Willis, “Construction should begin sometime in the second quarter with the first phase of apartments and retail expected to be ready by the end of summer 2021, and the final phase slated for the second half of 2022.”

CFC has built a variety of other mixed-use projects in Colorado, including the Lodge Hotel and Casino in Blackhawk, Clear Creek Square in Golden and the Mint Town Center in Stapleton.

KTGY is focused on residential and mixed-use developments and neighborhood revitalization. KTGY designed TriVista, a multifamily project in Denver, as well as Vita, a 55-plus project, in Littleton. Its Met at Boulevard One condo project in Lowry is under construction. 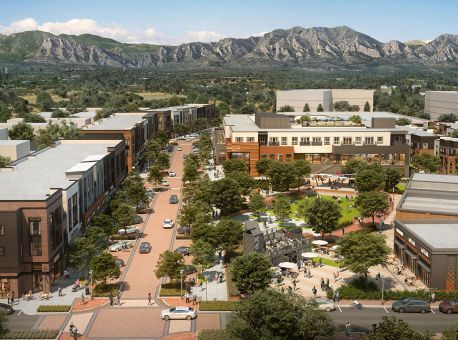