Developed by Eden Housing, Alameda Point Senior Apartments is part of the $1 billion project at the former Navy base on San Francisco Bay in Alameda, Calif.

The $36 million Alameda Point Senior Apartments—a 60-unit affordable rental community being built as part of a $1 billion waterfront development at the former Naval Air Station Alameda, in Northern California—has broken ground. It will be among the first buildings constructed as part of the mixed-use, transit-oriented Alameda Point Site A development led by master developer Alameda Point Partners.

Alameda Point Partners is a joint venture between managing partner Trammell Crow Residential, a division of  Crow Holdings, developer Cypress Residential Investments and SrmERNST Development Partners. Non-profit housing developer Eden Housing, which is building Alameda Point Senior Apartments, is scheduled to deliver a total of 130 affordable apartments as part of the 673 residential units included in the $500 million first phase of the massive redevelopment project. The Eden Housing units are designated for low- and very low-income households and will consist of the 60 units for seniors and a 70-unit property for families. Another 310 units in phase one are being designated for middle-income residents.

The first phase will also feature nearly 100,000 square feet of shopping, dining, creative office space, community and event space and eight acres of parks and open space. CEI is developing a 200-unit market rate residential community in phase one as well. When built out, the project will have 800 residential units, many of them designated affordable.

Completion of Alameda Point Senior Apartments is slated for July 2020. It will include 48 one-bedroom and 12 two-bedroom units available to seniors with annual incomes from 20 percent to 60 percent of the Alameda County Area Median Income (AMI).Thirty units will be set aside for seniors who have been homeless. Most of those—28 to be exact—are for veterans who are exiting homelessness.

Supportive services will be provided to residents through collaboration among Operation Dignity, Eden Housing and the U.S. Department of Veterans Affairs (VA). Building amenities will include a community room with kitchen, common courtyard, laundry facility, community garden and office space for on-site manager and supportive services.

The senior housing project is expected to create more than 73 construction jobs and 19 permanent jobs.

The senior housing is being constructed with the latest green building techniques and materials. Green features designed to ensure long-term energy efficiency and sustainability include a photovoltaic system that will help power common area electricity, a solar thermal system for domestic hot water heating and bioretention bases for storm water. The property will also have bicycle storage and electric vehicle charging stations.

Last week, the development team announced they hit a significant construction milestone of the first phase by completing the demolition of the entire 30-acre site as well as 50 percent of the infrastructure. The partnership closed on Site A in March 2018 and broke ground in May 2018. The transit-oriented development will feature a ferry, rapid bus transit with a connection to BART as well as bike and car sharing. 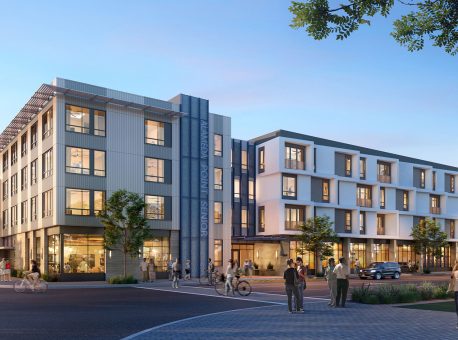