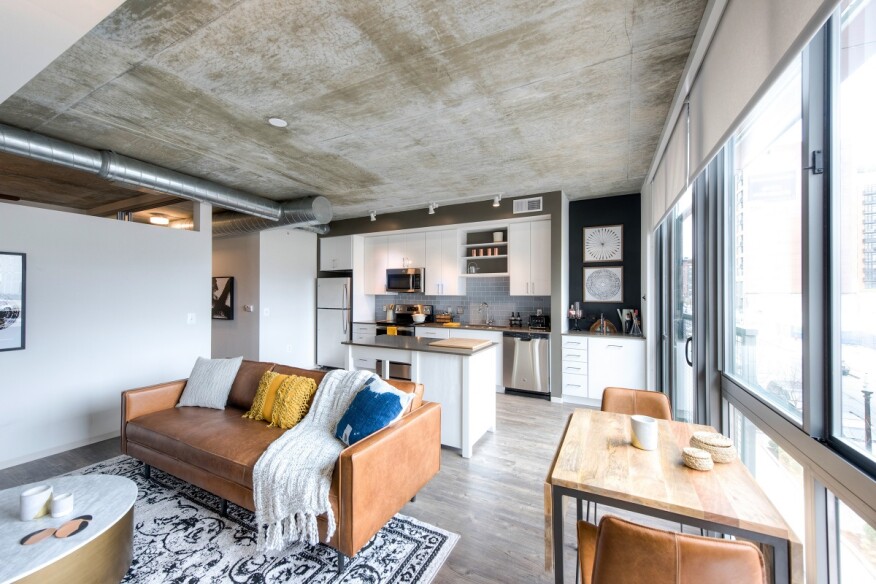 AVA NoMa, recognized in this year’s MFE Awards program with a high-rise design merit award as well as for its unit design, is located in Washington, D.C.’s, up-and-coming NoMa district, which is known for its industrial past. As a result, developer AvalonBay, architecture firm KTGY, and interior designer Degen & Degen paid homage to some standard industrial warehouse features in both the building’s individual units and its common areas, with concrete columns and ceilings, exposed ductwork, and chalkboard walls.

Because the target demographic of the community is largely working professionals and students, AvalonBay skewed the mix of floor plans more toward studios and one-bedroom apartments, which together make up 65% of the property’s 438 units. The remaining 35% are two- and three-bedroom plans designed with shared housing in mind and include private bathrooms for each bedroom.

Industrial features are balanced with modern accents such as space-saving, sliding barn doors and open shelving. In the kitchens, the sleek finishes continue with glass backsplashes, stainless steel appliances and fixtures, and quartz countertops.

In order to maximize the natural light in each of the unit’s living areas, the apartments include “buried bedrooms,” or rooms without windows. But to make each of the bedrooms feel brighter, the team installed store-front glass in the bedroom corners and cut out wall sections along the ceiling to bring in more light. Both solutions also enhance the building’s industrial vibe.

Large walk-in closets are combined with the showers to maximize space, but residents also have the option of customizing their closets to their own liking. Additionally, the apartments feature in-unit, full-sized washers and dryers.