Gov. Jared Polis is urging the State Land Board to address housing shortage for teachers, part of a campaign promise he made

A block away from where state lawmakers try to solve intractable financial questions, like school funding and affordable housing, sit two dilapidated warehouses that could soon be put to work addressing both issues at once.

Under an innovative plan hatched during the previous administration, the State Land Board has agreed to lease the publicly owned property in Denver’s Capitol Hill neighborhood to a private developer that intends to tear down the warehouses and build a six-story affordable housing project with the help of $2.2 million in tax credits. And, in an unusual twist on a publicly subsidized housing project, the developer will pay $200,000 a year back to the state to spend on public schools.

Top state officials this summer, at the urging of Democratic Gov. Jared Polis and the state legislature, are exploring this concept and other ways to use state land to address Colorado’s shortage of affordable housing, with an emphasis on workforce housing for teachers, many of whom can’t afford to live in the communities where they teach.

It’s a tantalizing model for policymakers that could address multiple problems at once. Land acquisition is a key barrier to developing affordable housing, and it just so happens that one of the largest landowners in Colorado is the state, which owns 2.8 million acres in trust lands that it leases to the private sector for things like farming, ranching and energy. In all, the leases on the board’s land holdings have generated $1.4 billion for schools over the past decade.

But hurdles abound. The state faces legal barriers, financial constraints and even simple logistical hiccups, such as where public land is located. Add it all up, and housing advocates are tempering their expectations for what could come of Polis’ plans.

In a letter to board President Gary Butterworth last week, Polis urged the commissioners “to consider if, as well as how, the lands under your stewardship could be utilized to create affordable housing solutions for teachers in Colorado.” His recent appointments to the oversight commission have already put the State Land Board’s staff to work compiling an inventory of property that may be attractive to affordable housing developers.

In campaign literature, Polis went a step further, proposing on his campaign website that the Land Board “incentivize leasing” for affordable housing — an idea that may conflict with the board’s constitutional mission of making money for schools.

Still, the dream scenario is a match made in policy heaven: In theory, Colorado could one day create workforce housing for teachers on state-owned land that would send money right back to the school districts that employ them.

“It can really be a win-win-win all around if the Venn diagrams all align perfectly,” said Kristin Kemp, a spokeswoman for the State Land Board.

Land board’s mission to make money may conflict with plans

Conceptually, using property controlled by the Colorado State Land Board to supply teachers with housing makes sense. The board dates all the way back to the state’s founding in 1876, when, under the state constitution, it was tasked with the stewardship of land granted to the state in public trust from the federal government.

Part of its mission is to use that trust land to generate funding for a handful of purposes — primarily to benefit public schools. By leasing land to profitable industries like agriculture and energy, the board has earned $1.4 billion for schools over the past decade, money that’s split between a school construction program and an investment fund to benefit schools. And one of the greatest needs facing public schools today is a housing affordability crisis that’s exacerbating a statewide teacher shortage, afflicting Metro Denver, impoverished rural areas and posh resort towns alike.

One survey found that 94 percent of Colorado school districts paid teachers less on average than what it cost to live in the district in 2017. Some have taken on multiple jobs to make ends meet; others are living in campers. Many are simply leaving the profession for better pay.

The board is uniquely positioned to help, Polis said. “The State Land Board has the potential to achieve unique collaborations with adjacent communities to assist in meeting these housing challenges,” he wrote in the letter sent last week. On the campaign trail, he went a step further, suggesting that the Land Board should actively incentivize leasing for affordable housing. (With the letter, The Colorado Sun’s Polis Promise Tracker now rates his campaign pledge “in progress.”)

But in practice, it may not be that simple. The Land Board is set up to generate steady income for schools — and affordable housing usually means government spending money, not making it.

There are different models for affordable housing, but they generally involve the government stepping in and paying a private developer to rent housing for less than they can get on the free market. That could occur through rent vouchers, or by helping subsidize the project’s development, through tax credits, financing or discounted land. It’s a type of arrangement that is being used by other entities in communities wrangling with housing affordability issues, including Buena Vista and some central Denver neighborhoods being pressured by gentrification.

“That’s hard for us to do: Our mission is to make money for the school children, not subsidize housing,” Director Bill Ryan told the commission at its meeting this month.

It’s hard — but not impossible, as the Capitol Hill project shows.

Wheatpasted art on the walls of 1271 Sherman Street, one block south of the state Capitol in Denver, photographed on July 21, 2019. The building and an adjacent parking lot are owned by the state government and are part of a proposed affordable housing development. (Eric Lubbers, The Colorado Sun)

Sherman Street is example for how Polis’ vision may work

According to board documents, the State Land Board obtained the 1200 block of Sherman Street in the mid-1990s. The staff explored a number of ideas to redevelop the property since then, but none worked out financially, leaving the state with two vacant warehouses and little income outside a paid parking lot on the south end of the property.

But after two years of discussions with Mile High Development, the board approved an option for a 50-year ground lease with the Denver-based developer and Brinshore Partnership, an Illinois group that specializes in affordable housing. With that commitment in hand, Mile High then received approval for $2.2 million in state and federal housing credits through the Colorado Housing and Finance Authority.

This year, the board approved another ground lease option for an affordable housing project for seniors on eight acres in Grand County. Indianapolis developer Herman & Kittle Properties will have to secure tax credits and financing for the project before the 43-year lease is finalized.

Kemp, the board spokeswoman, says these projects show how Polis’ idea could work. Not only is the state achieving its goal of adding affordable housing, but the two projects also fulfill the Land Board’s mission of making money. The Sherman Street project, for instance, will generate $200,000 a year to start, with periodic rent increases every 5 years. At an estimated market value of $4 million, that’s a 5% annual return for the state, which will still own the property at the end of the lease.

Doing it at scale is another matter entirely. Out of roughly 7,700 active leases managed by the Land Board, just 11 are ground leases, and only two of those are for housing — the other nine are for office and retail.

Kemp said the Land Board staff so far has identified only around 20 properties that seem especially desirable for future housing developments. The vast majority of its 2.8 million acres are located in remote areas better suited to uses such as farming, outdoor recreation or industrial activities, like mining or generating energy. The board this month voted to open 100,000 additional acres for hunting and fishing, on top of 480,000 already designated for the Public Access Program.

“The challenge with Polis’ approach is where is this land?” said Elena Wilken, the executive director of Housing Colorado, an advocacy group. “And one of the things we keep running into with affordable housing — you don’t want to put it in a place where the people living in those projects are isolated.”

That problem, coupled with the need to make money, may limit how effective the Land Board can be.

“Land availability is a huge deal,” she said.

Other ideas in the works to boost affordable housing inventory

Using public trust land isn’t the only idea on the table to boost housing inventory for lower income residents.

State lawmakers this year passed a law requiring all state agencies to produce an inventory of state-owned land that may be suitable for affordable housing projects.

Rep. Shannon Bird, a Democrat, said she sponsored the bill after seeing success stories as a Westminster City Council member, such as transforming a publicly owned vacant lot into a new Habitat For Humanity home.

“We were trying to be creative and think of different ways that we could meet the needs of our citizens without incurring additional expense,” she said. “One of the biggest cost-drivers in housing is land.”

And land owned by a state agency wouldn’t have the same constraints as that of the Land Board. That could open the door to the state offering land at a discount to incentivize teacher housing.

But Rep. Hugh McKean, a Republican who co-sponsored the bill, doesn’t want to see the state giving away the land at anything less than market price, whether it’s owned by the Land Board or not.

“We have, as the fiduciary, a responsibility to make sure we don’t just give away the state’s assets,” McKean said.

Instead, he views the inventory as an advertising tool to show the private sector what may be available on the market. “It might be an amazingly effective tool for employers to be able to build housing for workers,” McKean said.

Christine Scanlan, a Polis-appointee to the Land Board commission, acknowledges there are limits to using the state’s trust lands as a solution for housing. But she sees other ways the Land Board could play a role.

Half of the money generated by the Land Board each year goes to the BEST program, which finances construction projects for schools. Today, those dollars are earmarked for things like classrooms and gymnasiums. But with a change of law, Scanlan suggests, they could be invested in teacher housing, if that’s a bigger need for some districts.

“How do you bring resources from the district side to make that real?” said Scanlan, who is also the president of the Keystone Policy Center and a former Democratic lawmaker. “Maybe this is a way we could do that.”

That idea, though, could run into political headwinds. BEST has enough money to fund less than half of the $240 million in grant requests the state receives each year. Adding housing to the mix would only exacerbate the backlog.

For Wilken, the affordable housing advocate, the interest from Polis and lawmakers is reason to celebrate, no matter which ideas come to fruition. This legislative session, the legislature also approved record investments in affordable housing grants.

“I’m just excited that people are being creative, honestly,” Wilken said. “There’s not going to be one solution, because it’s such a complicated problem.” 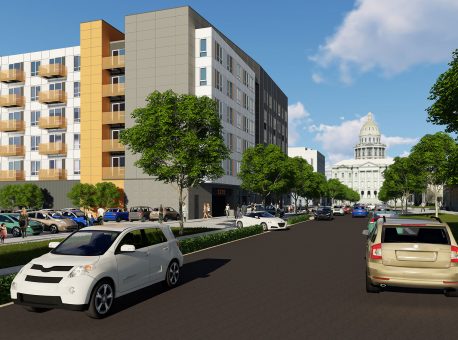