Cross-laminated and heavy timber are expanding as sustainable, less-expensive alternatives to steel and concrete, especially as building codes catch up 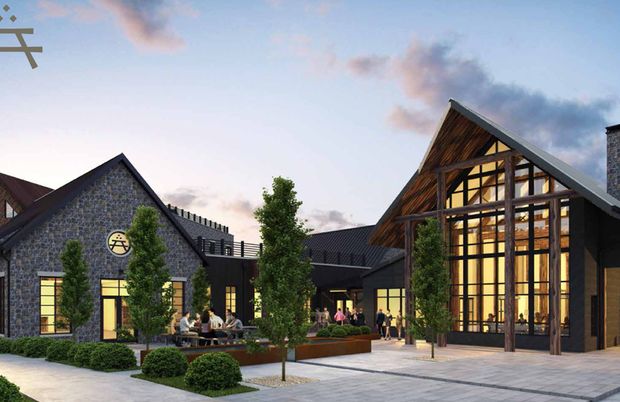 The 95,000-square-foot inn and spa, part of a sustainable working farm at Southall in Franklin, Tenn., was built with heavy timber and cross-laminated timber from managed forests. Photo: 906 Studio Architects

It’s been 150 years since Mrs. O’Leary’s cow earned them both a bad rap for incinerating a wood-built Chicago.

Ever since, in that city and elsewhere, concrete and steel have traditionally been used to construct commercial buildings, especially those reaching several stories high.

Yet increasingly, cross-laminated timber (CLT) and heavy timber are gaining traction as alternative framing materials in urban environments. These materials are promoted for their cost savings and relative sustainability because managed forests can be regulated and replanted, plus manufacturing wood and building with it emits less pollution than concrete and steel.

The technology, more of a reimagining of long-ago practices, has emerged in recent years — the seven-story T3 high-rise in Minneapolis was the largest mass-timber building in the U.S. at the time of its 2016 unveiling. More recently that crown has gone to the eight-story Carbon12 project in Portland, Ore. Chicago is entertaining a proposed 80-story wood skyscraper. What is new, however, is wider U.S. building-code acceptance of wood. The 2021 International Building Code will contain even more provisions to allow for mass-timber construction of taller buildings.

“As the codes change to permit the use of wood framing in taller structures, we expect to see the use of wood increase where it is economically viable to do so—either because it is more cost-effective, or it offers a market advantage over other structural systems,” said John Sheridan, executive vice president at Chicago-based James McHugh Construction Co.

“It requires 50% to 125% less energy to create structural materials in a wood-based building than in a steel or concrete structure,” said Sheridan. “Because of this, and depending on the structure, we can expect to see taller buildings using wood-framing systems or hybrid wood/steel/concrete systems to improve energy efficiency and reduce construction costs.”

McHugh Construction used both heavy timber and CLT in creating the four buildings, including one that is four stories tall, at Southall, a 325-acre farm-based resort in Franklin, Tenn.

Mass timber is the term to describe framing styles typically characterized by the use of large solid wood panels for wall, floor and roof construction. Experts said the term is sometimes interchanged with “heavy timber,” but “mass timber” is usually more specific to the material and “heavy timber” is used to describe a construction type. CLT is prefabricated using several layers of lumber to make one piece.

Yet increasingly there is incentive for sustainable practices beyond cost savings: reputation. 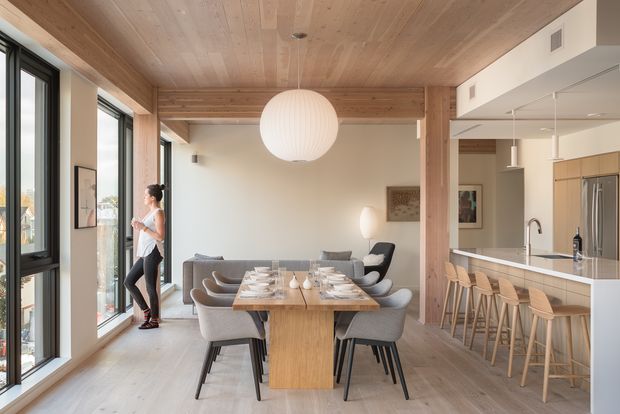 Cross-laminated timber, or CLT, like that used in the Carbon12 building in Portland, Ore., is produced by gluing strips of wood in perpendicular layers to create sturdy, stable boards up to 12 inches thick. | Photo: Andrew Pogue for Kaiser + Path

The built environment is already responsible for 75% of annual global greenhouse gas emissions, of which buildings account for 39%, according to Energy Department data. Construction industry and architectural initiatives, such as the 2030 Challenge endorsed by the Architectural Engineering Institute, push for pledges to make buildings carbon-neutral. President Joe Biden has pledged to make the U.S. a net-zero emitter by 2050, and hitting that mark will require private industry from all sectors throughout the economy to get on board.

In the meantime, steel and concrete will remain prevalent, which is lifting demand for modular steel and precast concrete systems. Their use can lower building costs and cut down on the energy needed to build from scratch. Architects and contractors have been increasingly customizing these materials for higher-end developments.

Beyond the practical, developers and architects are embracing the aesthetic possibilities that come with alternative building materials, including timber, and construction methods, such as modular.

“When modular was first introduced, no one believed it could be used for high-end commercial projects without sacrificing quality or the ability to customize,” said David Senden, principal at KTGY in Irvine, Calif.. The international architecture firm has applied both timber and modular technologies to hospitality, retail and mixed-use projects.

“A common misconception is that modular means recycled shipping containers. While those are used, purpose-built modular structures are much more common because they’re higher quality, can be tailored to the project and, unlike used shipping containers, don’t run the risk of contamination,” he said. “Usually we are designing modular structures that don’t look modular at all once cladding is installed.”

Global real estate company Lendlease Group, which includes U.S. operations, has long considered timber use and other broader sustainability initiatives as a key feature to what it is selling. The company has pledged to reduce its reliance on fossil fuels in buildings and equipment by 2025 and now has the more ambitious aim to eliminate carbon emissions throughout its supply chain by 2040.

“Developers often get a bad rap when it comes to sustainable building, but there is a cohort of developers with a conscience and very lofty goals around sustainability and place-making,” said Nick Iselin, general manager, Boston development, Lendlease. “And the reality is, there is a commercial advantage. It’s not just altruism.”