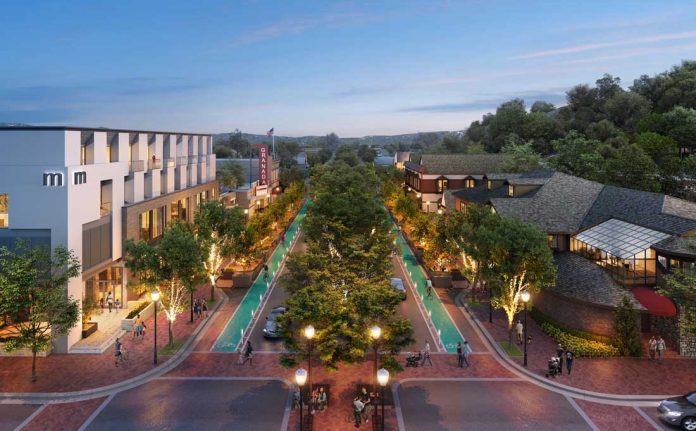 With the Covid-19 pandemic having changed the way of life in Silicon Valley and beyond, downtown Morgan Hill property owners, local tourism proponents and city officials are renewing their push for a “complete streets” vibe through the downtown neighborhood.

Frank Leal—developer and owner of the Granada Theater and MOHI Social restaurant—recently unveiled an architectural rendering of his vision of a slower, safer streetscape on Monterey Road through downtown Morgan Hill. The drawing by KTGY Architects (pictured above) shows Monterey Road reduced to two lanes of vehicle traffic—one in each direction.

Much of the extra roadway space would be converted to a “BPP Lane”—a “Bike, People and Pet” lane, Leal said at a recent downtown visioning summit organized by the City of Morgan Hill. The BPP lane is colored in green on the outside lanes of Monterey Road in the image above.

“That would give us a buffer from the loud traffic,” Leal explained. The layout would also leave room along Monterey Road’s curbsides for parklets, outdoor dining patios and other gathering spaces for the public and businesses.

Leal—a South Valley hospitality guru who owns businesses in Santa Clara and San Benito counties—decided to put his vision of Monterey Road on paper after opening and operating his MOHI Social restaurant outdoors for nearly a year during the pandemic. During that time, Leal—like many downtown business owners and patrons—observed ongoing traffic concerns that made the neighborhood potentially unsafe and unwelcoming to some visitors.

The City of Morgan Hill is in the midst of a public outreach effort to promote and implement a new visitor-friendly downtown streetscape that is safer for all modes of transportation. The effort began April 23 at a “downtown visioning summit” at Leal’s MOHI Social, where speakers from different cities discussed their communities’ “traffic calming” efforts in busy neighborhoods.

The summit also featured local business owners and a former consultant who helped Morgan Hill with its six-month “road diet” experiment on Monterey Road in 2015. A similar, permanent road diet is still on the table for when city staff plan to present construction and design options to the city council at the May 19 meeting.

On May 6, the city will host an online town hall where staff will share information gathered at the April 23 summit, and discuss the potential safety benefits of reconfiguring Monterey Road to provide space for businesses, residents and visitors to gather.

Morgan Hill Assistant City Manager Edith Ramirez said city officials are on board with the concepts depicted in Leal’s downtown rendering. She said the objectives go beyond improving safety and reducing traffic noise.

“The vision (we) talked about is a vision that is bigger, better, greater than just reducing noise and making the downtown safer. It’s a vision to create space for community,” Ramirez said.

At the April 23 summit, panelists talked about how the Covid-19 pandemic has changed how individuals, families and entire communities live. Life has slowed, people are spending more time with their families and outdoor activity (especially dining) is widespread—all of which add up to the right timing to re-create a downtown vibe that supports the new lifestyle. 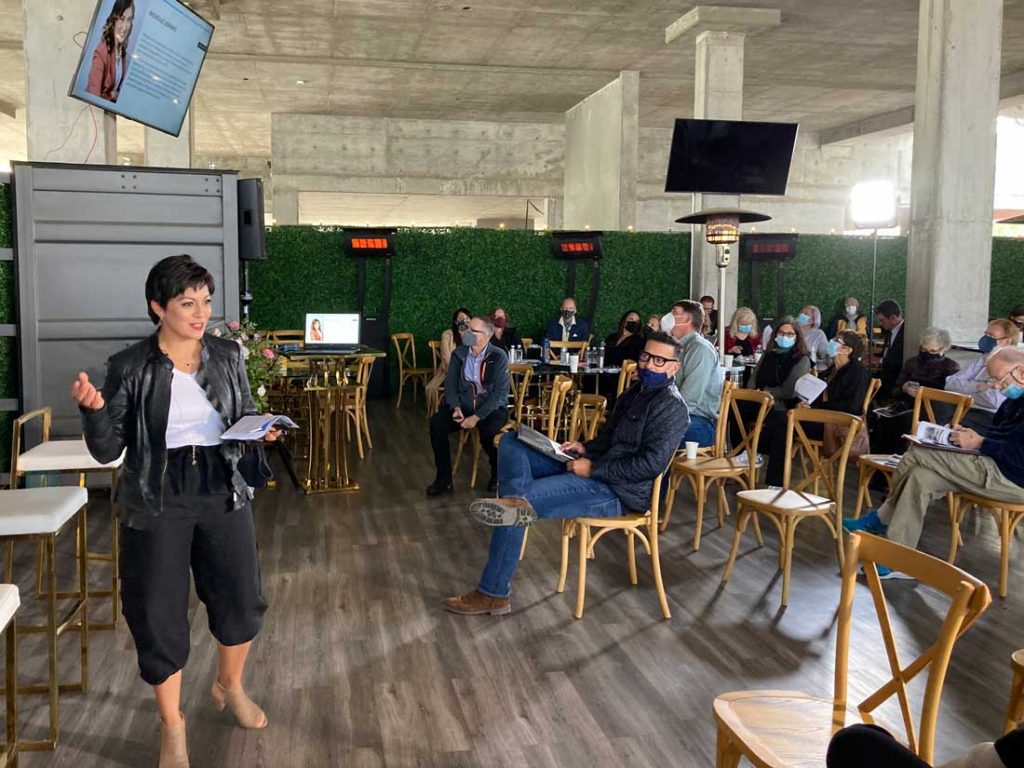 “People have more desire to connect and prosper with each other,” said Bryan Jones, a former consultant for Alta Planning & Design, which the city hired in 2015 to conduct the Monterey Road diet. Jones is now the city manager of Eastvale.

“Complete streets is a holistic perspective on how people move and connect in a space,” Jones said at the April 23 summit.

His presentation included data collected during Morgan Hill’s 2015 Monterey Road experiment, which reduced vehicle traffic to one lane in each direction. The outside lanes were reserved for pedestrian and bike traffic, as well as extra space for businesses and patrons to stretch out.

By the time the city’s experiment was over, bicycle traffic tripled through the downtown, transit ridership increased by 3%, large vehicles moved to Butterfield Boulevard to bypass the neighborhood and more pedestrians were counted during the trial, Jones said.

Also on the April 23 panel were officials from other communities where traffic calming and road diet projects have been successfully implemented—with or without extensive public opposition.

Michelle Leonard, President of the San Benito County Chamber of Commerce and Visitors Center, talked about the City of Hollister’s reconfiguration of San Benito Street through its downtown in 2020. That project was implemented on a uniquely urgent schedule due to the pandemic and associated restrictions on indoor gatherings. Leonard explained the city had federal funding from the CARES Act. The county, city and business community worked together to come up with a design for a series of parklet patios constructed as a key feature of the project.

“That downtown (project) bonded all of us,” Leonard said. “It wasn’t about us anymore. It’s bigger than that. It’s your community and the opportunity for your community to thrive.”

The April 23 panel also included two people who were involved in the highly contentious reconfiguration of Lincoln Street in downtown Willow Glen. That effort started with a trial run in 2014, when the city reduced the street from four vehicle lanes to three.

Tim Mulcahy, CFO of the Willow Glen Business Association, said when the trial run was under way, the residential and business community was sharply divided about its effectiveness. The road diet has since become permanent, and now it is rare to hear any complaints, Mulcahy said.

Furthermore, sales tax revenue in Willow Glen went up 3 percent one year after the road diet started, he added.

Jessica Zenk, San Jose Deputy Director of Transportation, was also involved in the Willow Glen road diet. At the April 23 summit, Zenk advised Morgan Hill’s planners to pay close attention to the community’s values as they attempt to adopt a complete streets plan.

“You want to make sure your community remains rooted in the values of equity and that everyone feels welcome, because that’s also a core of a downtown,” Zenk said.