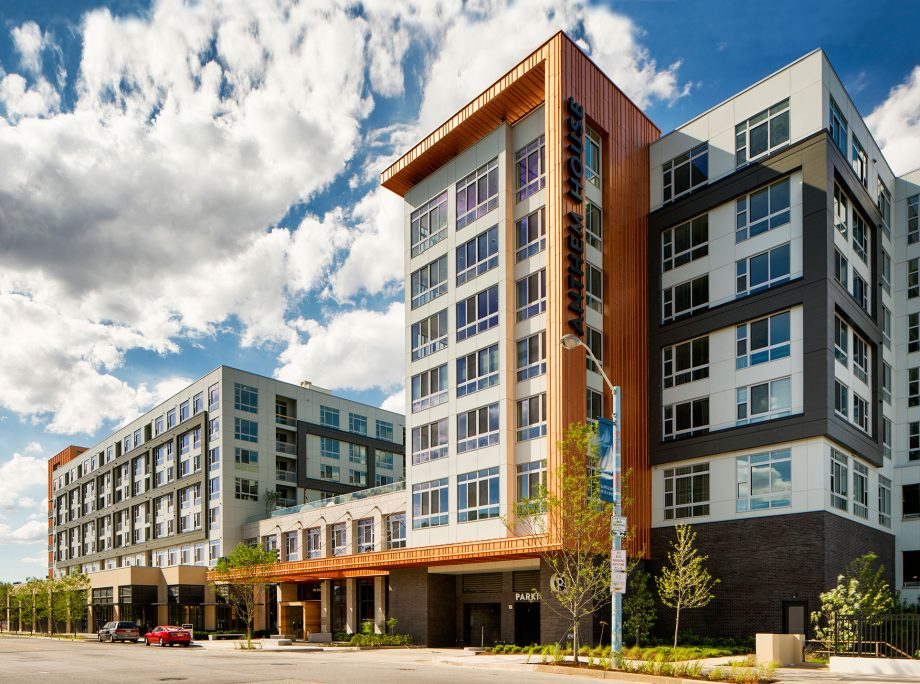 From the third-floor pool deck, the month-old $100 million Anthem House apartment project looks north at the new glass towers along the Inner Harbor waterfront. A floor above, an outdoor common area faces south at the Port of Baltimore.

The views of new and old Baltimore are the latest sign of change in Locust Point, the former industrial neighborhood now home to a mix of high-end housing, retail and the headquarters of Under Armour Inc.

From the outside to the inside, a blend of new and old is what the developers behind Anthem House are going for.

Sitting on the site of a former General Electric service center, the exterior has an industrial-like frame with light gray panels and copper-colored accents on the corners and over the front canopy.

Developed by Bozzuto Group, Scott Plank‘s War Horse Cities and Solstice Partners, the 292-unit building has leased 81 units, for an occupancy rate of about 30 percent. The first tenant moved in June 1, and work continues on the upper floors of the eight-story building. Patrick Butler, a vice president at Bozzuto, said the leasing figure surpasses early expectations. Many of the tenants so far are young professionals, said Amy Nelson, the building’s property manager for Bozzuto.

Rents start at $1,850 for a studio, $2,125 for a one bedroom and $2,750 for two bedrooms. Nine units on the eighth floor are catering to empty nesters and have additional finishes and features, including a wine refrigerator. The apartments start at $4,500 a month and are 1,400 square feet or larger.

As a wave of new apartment projects come online, Butler said Anthem House’s amenities, proximity to Interstate 95, harbor views and location in Locust Point is what will help it stand out. The location at Fort Avenue and Lawrence Street sits on the Charm City Circulator Banner route and a new water taxi stop recently opened about one block north of the apartment complex near Domino Sugar.

The S-shaped Anthem House has 1-acre of outdoor and green space between two elevated courtyards with an outdoor kitchen and grill, a two-sided fireplace and lounge seating. A 3,800-square-foot fitness center and studio has sightlines of outdoor space and opens up to the pool deck. The gym was developed in partnership with FX Studios.

The lobby is open to the public from 7 a.m. to midnight and features various murals, paintings, a fireplace and seating areas. A sliding wood door will open to Amber, a craft beer and coffee-centric restaurant occupying 2,000 square feet. The restaurant is scheduled to open in September.

Next door, ground has broken on Anthem House II, a 52-unit project expected to deliver next summer. Anthem II will be more attractive to younger working professionals who want to keep their rent lower, developers say. Tenants will be able to use the amenities at Anthem House.