Route 66 will have 126 new homes in Glendora after the City Council approved the latest development proposal at its Tuesday special meeting.

Gables on 66 will bring 106 townhomes, 1,950 square feet of commercial real estate and 20 private homes to an 8-acre, L-shaped parcel of land on Route 66 and Colorado Avenue between Grand and Vermont avenues. The council voted 5-0 to approve several zone amendments and permits for the project at 350-436 W. Route 66 and 401-427 W. Colorado Ave.

Glendora Route 66 Investors LLC submitted the application for the project, which would consist of a subdivision with the 20 homes along Colorado Avenue and the townhomes and commercial space along Route 66. The development is estimated to bring $26.6 million in local income during the construction phase.

The project also requires the demolition of 20 apartments, five single-family homes and the Magnolia Mobile Home Park, which has one apartment and 57 mobile home spaces.

The proposed demolition of the mobile home park caused a delay in initial hearings for the project, after an attorney for the park’s residents submitted a protest over the project’s recommendation for a negative environmental impact report.

However, the developer and residents reached a confidential settlement for the residents to move, said Robert Solomon of the Community and Economic Development Clinic at UC Irvine School of Law at Tuesday’s meeting.

“(We are) confident we can do a good job relocating people with the resources we have,” he said.

The townhomes will consist of 19 three-story buildings with three to six units in each structure. A central open space will include an outdoor kitchen area, barbecue area and tot lot while a secondary location will feature a dog park.

The project is not LEED-certified, said Daryl Sequeira, vice president of La Terra Development, who spoke on behalf of Glendora Route 66 Investors, but includes green features such as drought-resistant landscaping.

It did meet preliminary LEED requirements, clarified Brian Sevy, architect with KTGY Group, but the certification was not pursued because of the paperwork and cost involved.

Once completed, the complex will bring in $640,000 in annual property tax revenues, $3.8 million in annual local income and 67 jobs, according to an economic impact report by John Burns Real Estate Consulting that was presented to the Planning Commission. 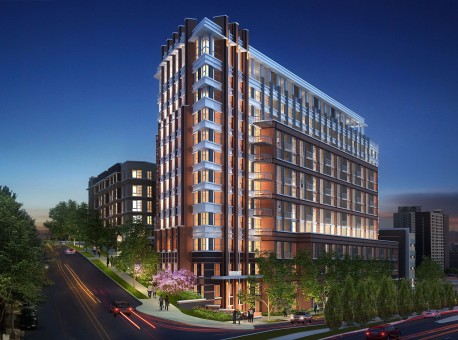