Construction is underway on a new steel modular apartment building in Los Angeles, the first in a series of housing developments to house the city’s chronically homeless population.

Affordable housing developer Aedis Real Estate Group, along with its team from KTGY Architecture and HBG Construction Corp., is developing Hope on Alvarado, a five-story, 84-unit modular apartment on a 4-acre site at 166 South Alvarado St. in the Westlake neighborhood of Los Angeles. 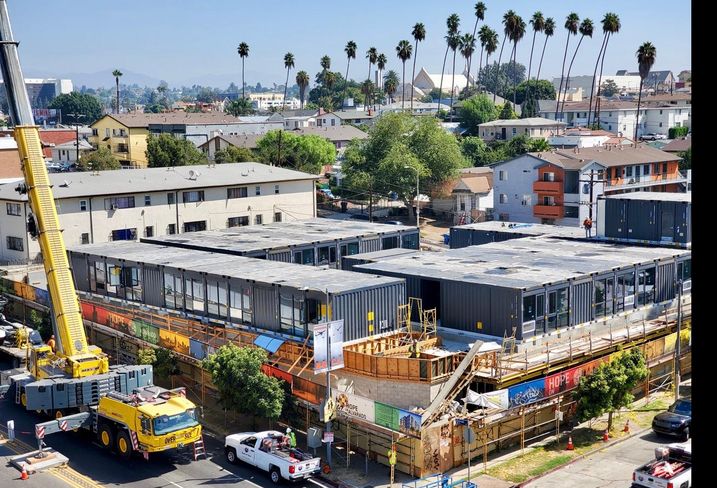 Aedis President Scott Baldridge said this is the first of at least three modular housing developments the group plans to build in Los Angeles with the goal of getting people off the streets.

“Three years ago, we saw there’s a tremendous need for the neediest of us,” Baldridge said at a press event Tuesday overlooking the Hope on Alvarado development. “Our whole mantra is to build quality units, in the quickest time possible.”

The press announcement for the modular project comes a week after President Donald Trump lambasted California and local Los Angeles and San Francisco officials for not doing enough to curb the homelessness epidemic.

There are at least 59,000 homeless people living in Los Angeles County, a 12% increase from the previous year. In the city of Los Angeles, there are 36,000 homeless, a 16% increase year over year.

Many CRE professionals pushed back against the Trump’s claims this week, saying that there is not one silver bullet solution to the crisis.

Baldridge later told Bisnow because of its speed to market, this type of modular construction will help the city’s goal of quickly housing the homeless. Baldridge said traditional stick-built construction would have taken at least two years to get completed. With modular, this type of project will take 12 to 14 months.

Hope on Alvarado is slated to open in December or January.

“There is a need for this type of development and we have to keep the momentum going,” Baldridge told Bisnow. “I’m hoping in the next 12 months we’re going to see more of these projects.”

Along with Hope on Alvarado, Aedis has two other modular projects in the pipeline: Hope on Broadway and Hope on Hyde Park. 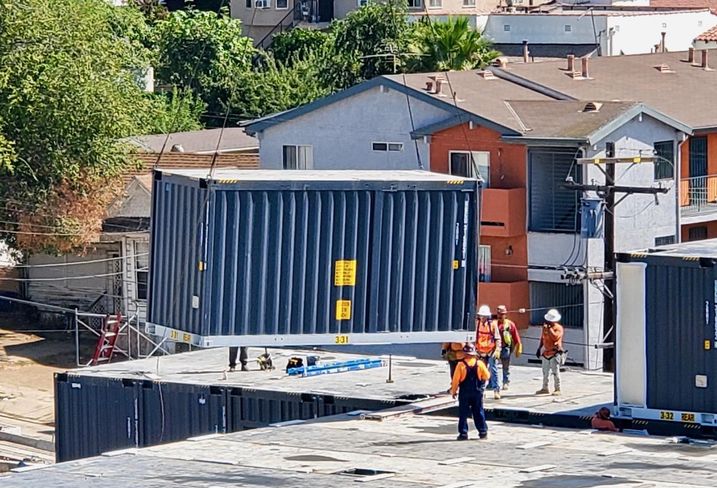 Aedis has already received a $6.7M loan from the city of Los Angeles’ Measure HHH funding, a $1.2B bond set aside to build 10,000 units of supportive housing, to build Hope on Broadway.

The Hope on Broadway development will be located at 52nd Street and South Broadway Avenue and will consist of 49 units. Hope on Hyde Park, a 98-unit modular building, received a $9.3M HHH loan, Aedis officials said. Baldridge did not disclose the cost of Hope on Alvarado, which did not receive a HHH loan.

At the press event Tuesday, the under-construction modular building looked like an oversized Lego or Jenga set.

A construction crane carefully picked up an 8’ x 20’ rectangular modular unit — about the size of a shipping container — from a truck, hoisted it up in the air before moving and lowering it to a group of waiting construction workers, who then carefully set the piece in place. There are only two types of modules being used here — an 8′ x 20′ and 8’ x 45’.

The development will consist of four floors of modules over a concrete podium. The building will feature a mix of studio, one-bath units and one-bedroom, one-bathroom units ranging in size from 400 to 480 SF. There will be office space for nonprofits to support the residents, a central courtyard, common areas and a community stage.

“Until we get more housing, we will not end homelessness,” Martinez said. “We believe housing is a right and not a privilege.”

“The goal is to get enough housing for everybody,” KTGY Associate Principal Mark Oberholzer said.