On a lot of projects, developers save money by making the most of an oddly shaped lot, designing around corners to fit in extra units wherever they can. But when it comes to modular construction — the process of assembling buildings on a site from pieces that are fabricated somewhere else — it’s more efficient to create designs that can be duplicated over and over, says Mark Oberholzer, an associate principal at KTGY Architecture + Planning. This fall, KTGY is wrapping up a modular construction project that’s meant to help a few of Los Angeles County’s more than 58,000 homeless residents find stable housing and a range of supportive services.

KTGY began working three years ago with a team of developers and contractors on Hope on Alvarado, which includes 84 units of supportive housing for formerly homeless people in Los Angeles, along with a courtyard and spaces for support staff on the ground floor. The developer, Aedis Real Estate Group, initially wanted to use shipping containers to construct the units. But the group eventually decided that it was cheaper and more reliable to buy steel modules from China.

“The whole concept from the developer was, how can we do this faster? It takes too long and costs too much, which is the story of housing right now,” Oberholzer says. The project is currently under construction and is expected to be ready for occupancy early next year.

Three years of design, permitting and construction may not sound like much of an improvement in efficiency. But there were issues with steep slopes on the site that made initial construction slow going, and it took a lot of time to get the designs right upfront, says Scott Baldridge, president of Aedis Real Estate Group. Now the building is going up quickly — about a story a week. And the designers and developers have learned a lot about how to make it faster in the future.

“It’s not just like a product that comes off the shelf,” says Oberholzer. “It’s much more integrated than that. The time that we have all spent since 2016 is starting to pay off. … It’s basically a lot of research and development time that we spent. Now, we’re going much, much faster on the design.” Hope on Alvarado is the first modular project for both Aedis and KTGY, but there are at least two more in the works.

The Alvarado project is funded with low-income housing tax credits and tax-exempt bonds, Baldridge says. They weren’t sure how it was going to work when they started, but they had the sense that they had to figure out how efficient modular building could be, he says.

“We all took a leap of faith and said, if we break even, that’s great. We just have to learn how to do this,” Baldridge says.

For the next two projects, Hope on Broadway and Hope on Hyde Park, the developers are using tax credits again, but they’ve also received a combined $16 million in local loans through the city’s HHH fund. The fund was created through Proposition HHH, a $1.2 billion bond measure approved by 77 percent of Los Angeles County voters in 2016, with the intention of providing some 10,000 housing units for homeless people, with support services like mental health care and drug and alcohol treatment. Many of the projects funded by that bond sale are already in the works. But just last week, an audit by the L.A. city controller suggested that the city was unlikely to reach the goal of building 10,000 supportive-housing units, according to LAist. A more achievable goal would have been around 7,500 units, according to the report, and rising construction costs are partly to blame.

Baldridge says the Trump administration’s tariffs on Chinese steel have raised costs for the next two projects, making the HHH loans a necessity. But they learned a number of ways to speed things up through the first development, including making choices about site selection that minimize the need for site preparation. He also said the city has become more attentive to the needs of developers who are building affordable and supportive housing, and shrunk the amount of time it takes to get from permitting to development.

If a developer is thinking about doing modular construction, Baldridge says, “You really have to commit and start seeing the savings on the second and third projects. We spent a lot of money upfront on the architecture, [but] we’ve learned that we can put up floors one a week.”

Oberholzer says the architects are still experimenting with the design of the units and the steel modules. The trickiest part of the process is connecting the plumbing and electrical systems in each unit to the water and power sources for the whole building, he says. And the architects are trying to reduce the number of access panels in each unit to create a cleaner design. The current buzz around modular construction is likely to even out as more developers learn from their own projects and each other’s, Oberholzer says, and the process will become just another “arrow in the quiver.” But it’s also important to find new ways for the buildings to serve their residents, and to interact with the cityscape, he says.

“There are cities in the world where buildings are repeated and repeated and repeated, and it’s not a good urban environment to have buildings repeated,” Oberholzer says. “We’re trying to understand the manufacturing and architectural rules that are a good fit with modular — that allow freedom of expression. We feel like it’s fertile ground for architectural exploration.” 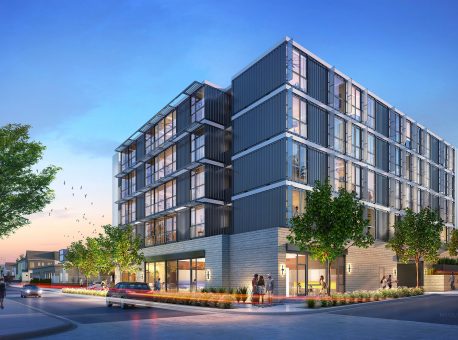