Inside AVA NoMa, the 438-unit apartment building opening this week

Bisnow: Jon Banister
The outside of Ava NoMa seen from M Street

AvalonBay’s latest project, AVA NoMa, cost $150M to build and has 438 units and 7,000 SF of ground-floor retail, where it is still working to sign a tenant. At 55 M St. NE, the building is connected to the more upscale First and M building Avalon acquired in 2013. It is near much of the neighborhood’s construction activity, with Skanska’s Tyber Place across the street and JBG’s Capitol Point behind that.

Bisnow: Jon Banister
The leasing table inside the lobby of Ava NoMa

Upon entering AVA NoMa’s lobby, prospective tenants can sit down at the bar-like leasing table, an attempt to create a casual and less overwhelming process for young renters.

The AVA brand, which has a smaller iteration on the H Street corridor, is geared toward younger residents looking to socialize and willing to have smaller units or a roommate in exchange for lower rents. About 40% of the units are two- or three-bedrooms. The studios start at $1,700 while one-bedrooms start just over $2,000 and two-bedrooms start at just over $3,000.

AvalonBay portfolio operations director Patrick Lewis said the building has had very strong interest, with about 25 people touring each week and a pre-leasing goal already beaten. The first three tenants will move in on Wednesday, Lewis said, each of them in studios.

Bisnow: Jon Banister
One of the seating areas in Ava NoMa’s amenity space

The expansive ground-floor amenity space has two separate seating areas with televisions and couches. The garage door walls can open up on nice days to connect with the courtyard.

The amenity space also has a 20-seat table for working or eating. Next to that are three private work spaces. The building also has a 24-hour concierge on staff to manage the package delivery system and accommodate residents.

The developer spared no expense on the fitness center, a 4,800 SF gym with a weight-lifting area, treadmill and elliptical area, yoga room and outdoor turf courtyard with additional workout equipment.

The gym features a mural from local artist Michael Crossett, who also created paintings for the hallways on each floor.

Courtesy: AvalonBay Communities
A rendering of the rooftop amenities at Ava NoMa

The rooftop amenity space is still under construction, but should be finished by Memorial Day. The 7,776 SF roof deck will feature an infinity pool and patio on the southern side and a 16-by-8-foot big screen on the northern portion where Avalon plans to host watch parties for sports and movies. The pool and screen areas will be connected by a closed-in lounge with a kitchen that will be open year-round. The roof deck also includes a dog park and pet spa.

Atop the 13-story building, the roof deck offers views of the Capitol, the Washington Monument, Rosslyn, Catholic University and the rest of the DC skyline.

The kitchen in the 1,175 SF model two-bedroom unit has stainless steel appliances and quartz stone countertops. The kitchen and living room area have direct access to the balcony looking out over the courtyard that connects the building with First and M. 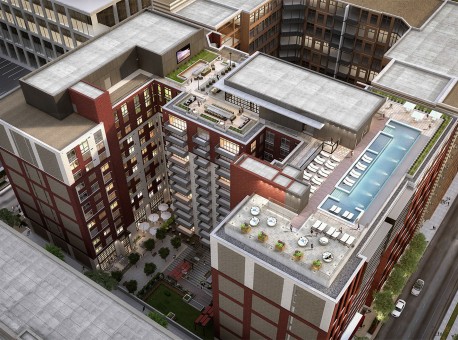