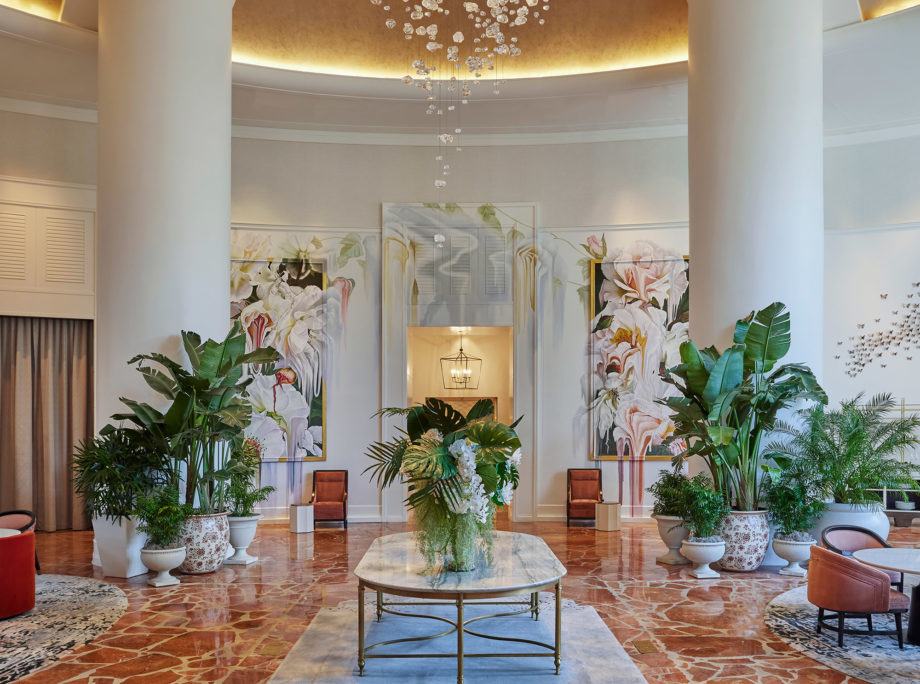 In uptown Atlanta’s Buckhead district, the InterContinental Hotel has just undergone its first major renovation since opening in 2004. The complete redesign of the 422-room hotel, spearheaded by KTGY Simeone Deary Design Group, shifts aesthetic focus back to the city’s southern roots, with design elements inspired by the state’s symbols: the peach, the honeybee, and the Cherokee rose.

Much of InterContinental Buckhead’s stately architectural features were inspired by the southern manor house. Now, those features are laced with nods to the state’s symbolism. On the ground floor, the great hall boasts new rose-colored marble floors that reflect natural light from the private garden as it’s filtered through the lobby windows. Red and blush rose upholstery pops against crisp white walls, which are lined with large-scale abstract paintings by local mixed-media artist Niki Zarrabi, and a custom ceiling fixture composed of hundreds of hand-blown crystals adds texture and intrigue.

Meeting spaces at the IC Hotel draw inspiration from the work of honeybees with rich, purple wallcoverings and custom carpet patterned to mimic the flight of a bee. Ebony wood floors and bright pops of green lend the Club Lounge a nature-inspired glow, and large rugs inspired by the textures of natural stone warm the floor with soft, organic shapes in mossy shades of green and gray.

The hotel’s new guest rooms are also a nod to southern style and culture: The Signature Suites are meant to evoke the archetypal “Southern Belle”, with a color palette of crisp white warmed with textural touches of taupe and jeweled emerald velvet. The Presidential Suite was designed to reflect characteristics of the archetypal “Southern Gentlemen”, characterized by dark accent metals, wood textures, and stone as well as an upgraded fireplace, honey-toned floors, and large iron canopy bed. 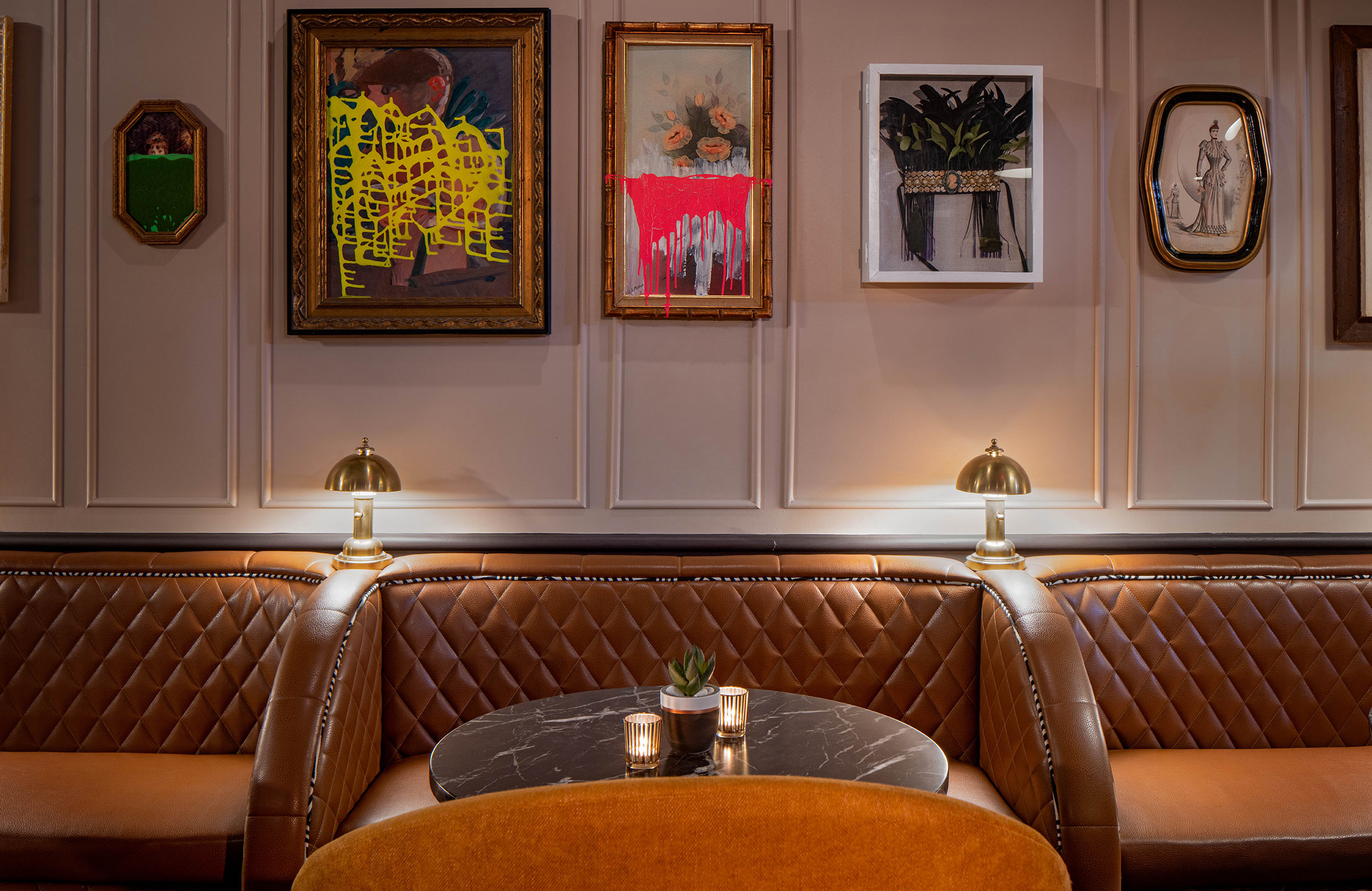 In the heart of downtown New Orleans, the newly renovated Pelham Hotel sits steps from the French Quarter. In the 19th century, when the city was an active hub of the American theater scene, the property was the home of theater director and entrepreneur James Caldwell, who christened the place “Pelham Manor” after Alan Pelham—one of the most famous theater actors of the day. Even earlier, this was the site of a plantation owned by Jean Baptist Lemoyne de Bienville, an early governor of French Louisiana and the founder of New Orleans. Renovated by Manhattan-based firm Suomi Design Works, the hotel presents a dazzling new look for a location rife with NOLA history.

Custom-curated artworks line the walls of the hotel, including salvaged pieces from the original hotel’s art collection that were reimagined and reconstructed by interior designer Vanessa Watts, who added fluorescent paint accents. A series of original artworks by beloved local artist, Page Goss, hang in the second-, third-, and fourth-floor lobbies.

To create the Pelham’s decadent and inviting lobby, Suomi opened an area that was once divided into smaller spaces. The result was designed to pay homage to the luxury concession areas that once populated the lobbies of grand theaters throughout the district. Gilded shelves display hand-selected liquor and wine bottles, and green canopies line the reception area, accented with vintage-style signage. The bar, which features built-in ship lamps, black-and-white graphic trim, and oversized windows, highlights the building’s historic status. 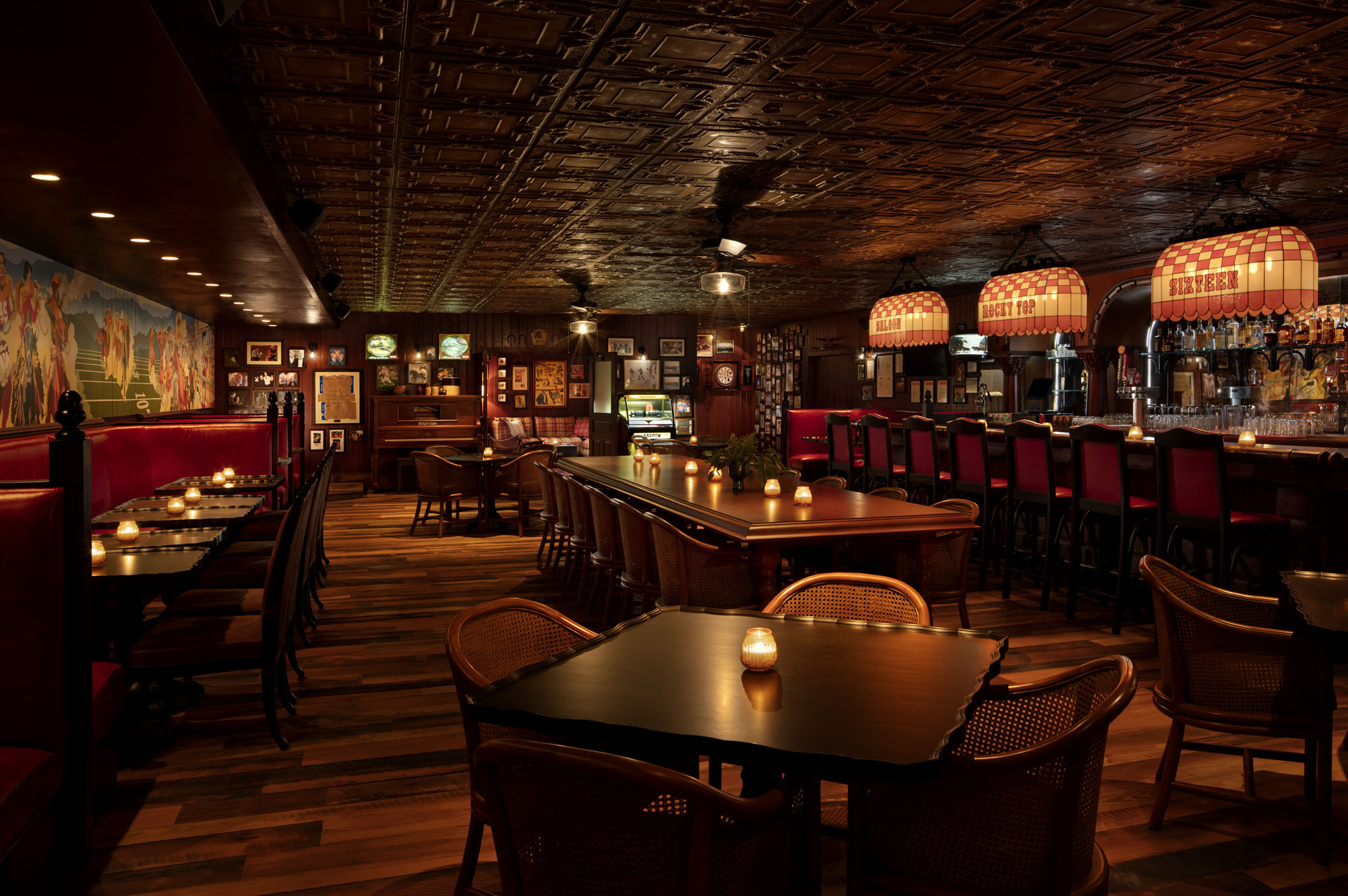 Designed by Manning, along with the Graduate’s in-house design team, the kitschy, western-themed spot feels both friendly and familiar. The restaurant’s exterior is designed to look like an old-school western saloon, with rough wood panels and a slightly Disney-esque Pioneertown vibe. Entering the restaurant, a warm wash of inviting, autumnal colors welcome guests into a treasure trove of 1980s-sports-dad-style kitsch.

Saloon 16’s main dining room features a range of elements chosen to evoke or inspire your own “man-cave” at home—the kinds of decor items that could easily be replicated in a personal setting. The entire space is saturated with memorabilia from Manning’s college years at UT, including photographs and framed mementos from his football career, as well as novelty items that celebrate Knoxville, including dart boards and various college-logo memorabilia. Nostalgia permeates the design: in one corner, a jukebox features a range of custom selections, a vintage stand-up piano rests in another corner. Even the menu pays homage to Manning’s past lives: Cheese Bings and double stack smashburgers are just two of the Saloon’s hearty post-football-practice offerings. Tucked away in a corner of the restaurant is a private dining room space designed for hosting intimate group experiences like whisky tastings and alumni celebrations.