Japanese-Inspired Design and Building Arrives in U.S. Via The BUILDER Chōwa Concept Home

The project emphasizes “living in balance” and brings Japan-based Sekisui House’s precision-crafted construction method to the U.S. for the first time. The United States has been known for its broad mix of cultures since its origin. From foods and traditions to languages and values, immigrants from the east and west brought their knowledge and practices to the U.S. to establish fulfilling lives for themselves, their families, and their communities. And while home building may not be the first thought that comes to mind when thinking of concepts derived from international cultures, this year’s BUILDER concept home holds the potential to alter opinions.

“We relish the opportunity to showcase to U.S. customers the corporate cultures both of our companies hold so dear, as well as to make a physical example of our corporate maxim to ‘make home the happiest place in the world,’” says Yoshihiro Nakai, president and representative director at Sekisui House. 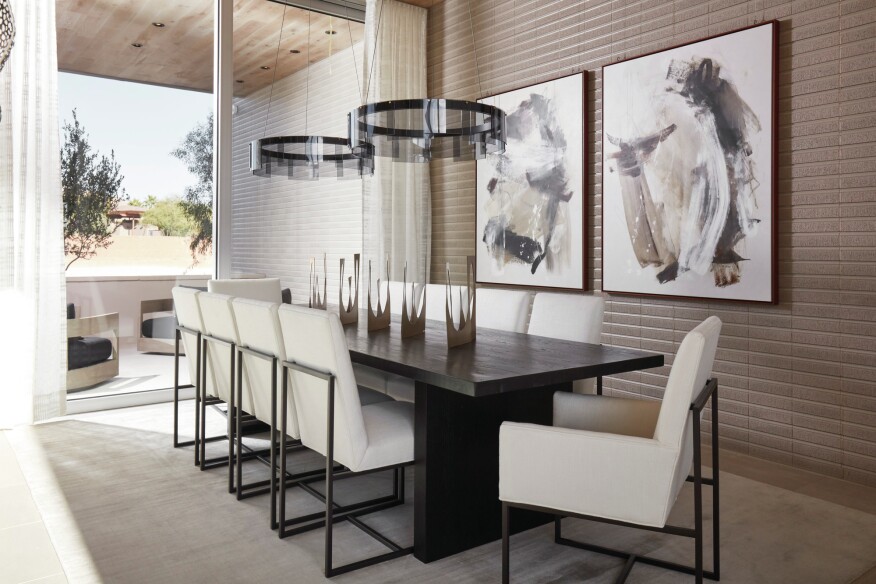 The roughly 5,400-square-foot home sits on a 0.4-acre lot in The Ridges neighborhood within Howard Hughes Corp.’s Las Vegas master planned community of Summerlin—about a 20-minute drive from The Strip. It introduces the U.S. production market to the Sekisui House core value of “love of humanity,” which provides a holistic framework for the design and development of the concept home. In fact, the ancient Japanese term chōwa “represents the spirit of partnership and reflects life balance, well-being, sustainable value, and connectedness to nature,” says Nakai.

To create a home where owners can live in balance, U.S.-based architects at KTGY and Japanese architects from Sekisui House sketched separate plans for the house that overlooks the Red Rock Canyon to the west and the downtown Las Vegas skyline on the backside. From there, the team collaborated on those designs, and then the Sekisui House architects tweaked the final plan based on the structural needs for their unique prefabricated process.

“It became clear that the bigger differences were the expectations, buyer needs and wants, and the varying differences between what they do in Japan and what they do here in the United States,” says William Ramsey, principal at KTGY Architecture + Planning. “It involved a lot of conversations and compromises on both sides, as we both had the role of design architects.”

Throughout the home, both architect teams stressed seamless indoor-outdoor connections, maximizing natural light, and clear sightlines in their plans. The “living in balance” theme also played a large role in the home’s design, with the designers trying to establish a balance between concepts such as public and private space. Another main goal was flexibility and the home’s ability to work for many families in different stages of life. 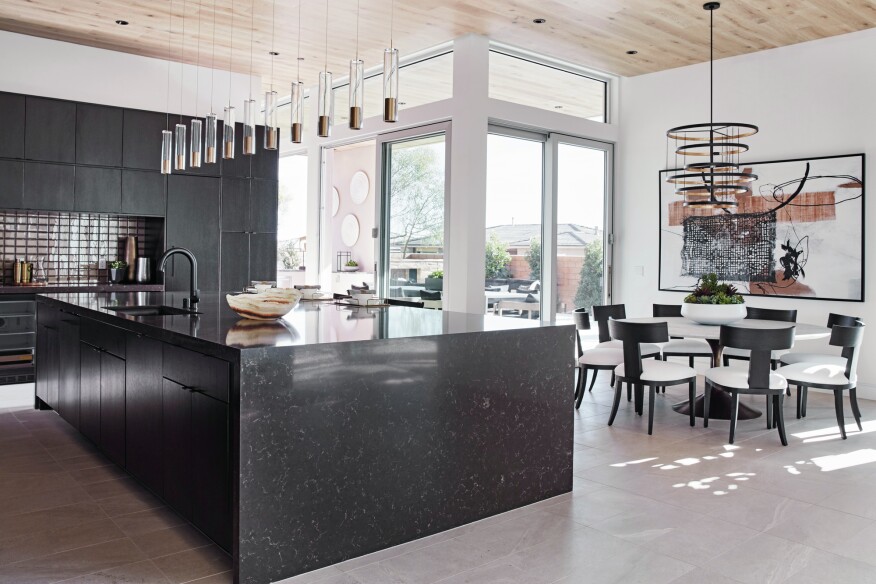 “This project was a true collaboration between two cultures that speak different languages and have different lifestyles,” says Tara Ryan, president of interior design company Ryan Young Interiors. “In order for us to be successful, it was imperative that each of us spend a tremendous amount of time listening to how the other approaches their designs so that we could create a finished product that truly reflected the ‘east meets west’ theme.”

Once the open-concept plan with Japanese principles and adapted U.S. dimensions was established, the team sent it overseas to Sekisui House’s Kanto factory north of Tokyo, where structural members for the foundation, building enclosure, interior structure, and roofing system were manufactured to precise, within-millimeter accuracy and shipped in containers to the U.S.

The luxury home was built using Sekisui House’s SHAWOOD laminated post-and-beam style frame and proprietary, metal-joint connection system, which is unlike any in North America, says Joel Abney, vice president of operations at Woodside Homes. During the planning stages, the home underwent a rigorous, pre-site engineering, design, and manufacturing process. Then, each beam and joint was manufactured to connect with exact tolerances, resulting in quick and accurate on-site assembly. 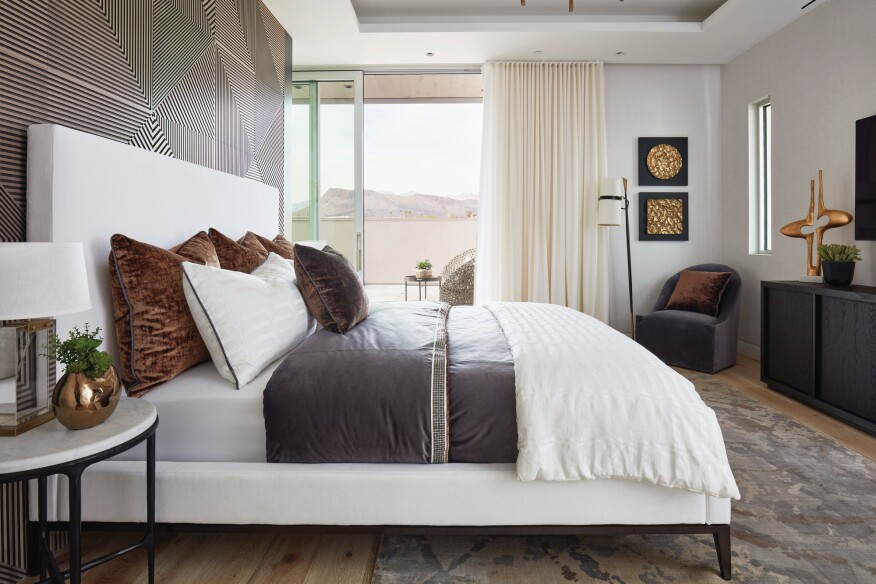 For the foundation, Sekisui House deployed another innovative method for foolproof execution, simplicity, and accuracy. The company uses a metal-form board foundation wall system and pre-built templates that are tuned to the exact house being designed. When the team poured the foundation, the diagonal from the right-angle southeast corner of the foundation to the right-angle northwest corner, measuring 139 feet, 4 inches, was within 3/16ths of an inch—less than 5 millimeters—accurate.

“In the U.S., we tend to be much more ‘we will figure it out as we go,’ just from a cultural approach to home building,” Abney notes. “With Sekisui House, every detail is predesigned and designed to work holistically together.”

On-site crews, including the framers, the concrete team, and Woodside workers, didn’t require extensive new technical skills, even if it was their first time working with the system. The home was framed in eight days, says Abney, and there were no modifications necessary during construction.

With almost every part planned out in the early construction stages, Sekisui House is able to identify material waste ahead of time and plan how to recycle that waste at the end of the project.

“From the very beginning, we felt that this project could be an example of how Japan and the U.S. can work together to meet Sekisui House’s vision of solving societal problems with housing,” Abney says. “There’s an elegance and brilliance to their simplistic approach, because if you design it properly and you have the exact dimensions, it really can save time and provide higher quality in the long run.”

The House Room by Room 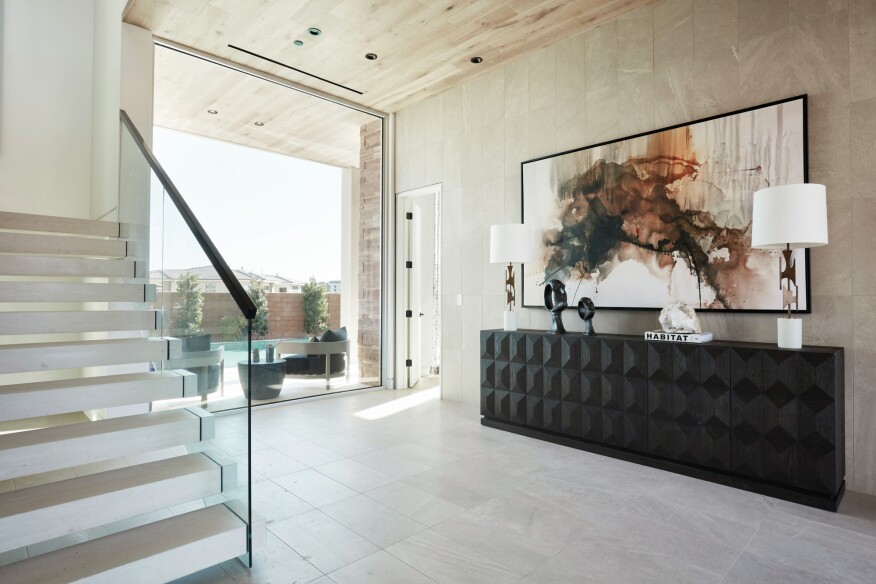 Entrance
Visitors to the over 5,000-square-foot concept home begin at an oversized front door with a solid warm-wood construction. Upon entrance to the foyer, users will experience the seamless indoor-outdoor connection sought by the Japanese architects. A floor-to-ceiling and wall-to-wall window looks directly out to a covered loggia in the backyard and brightens the space with sunlight.

Unlike other open floor plan homes, the architects treated the entryway as its own private space. “We protected the foyer a little bit more, so you don’t immediately see into the entire house,” says William Ramsey, principal at KTGY Architecture + Planning. “As you enter, you get a transition of different entry experiences.”

A porcelain tile floor was chosen for the area to balance the warmth of the wood floating stairs and the dramatic wood ceiling, says Tara Ryan, president of Ryan Young Interiors. “Then, we carried the material up the wall and added a large wood console with a really rich piece of art.” 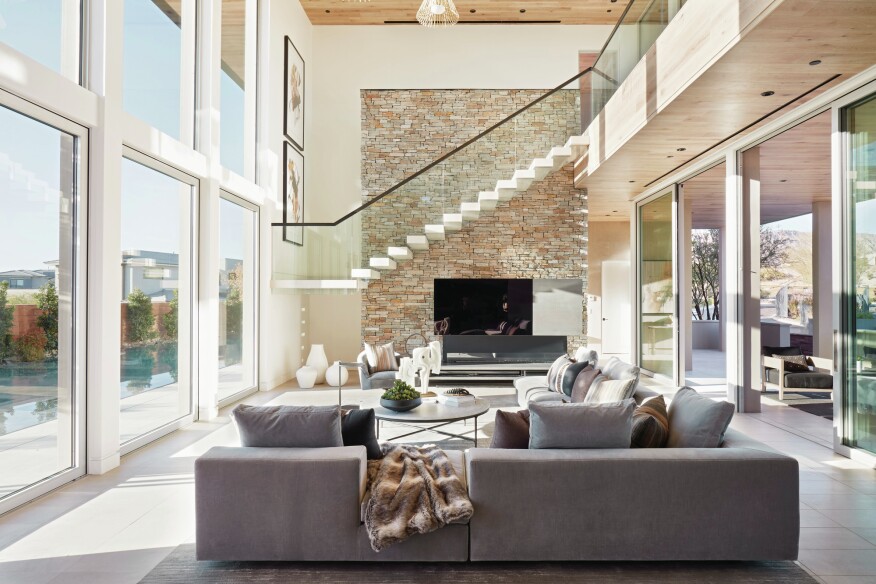 Living Space
From the entryway, the floating wood stair with glass railings wraps around the focal fireplace to the double-height living room. Seamless indoor-outdoor connections were stressed again here, with expansive window walls on the room’s two main sides. On one side, swinging doors open to the pool, while the other includes large sliders to extend the living area toward the front. 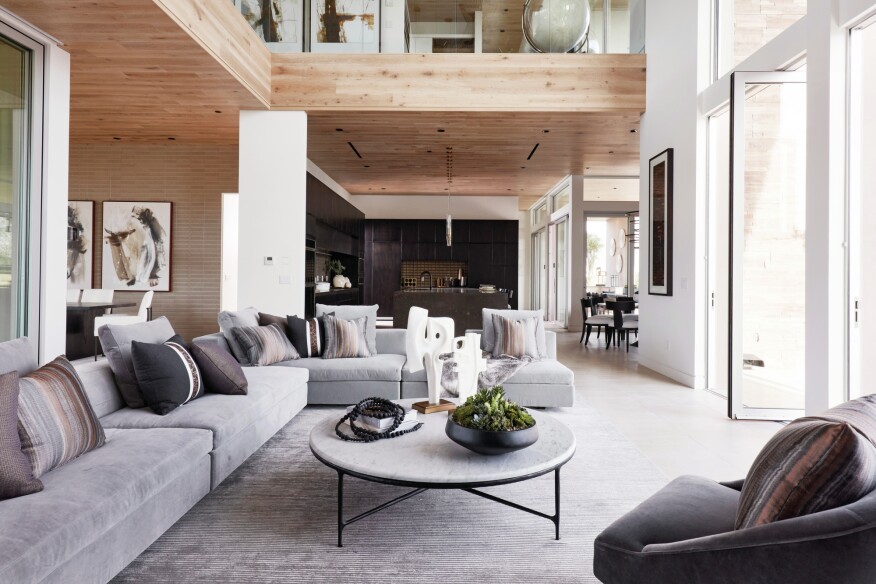 Natural materials, clean lines, and a sense of calmness were also instilled into the great room. The white oak wood ceilings were continued, and the interior design company selected a series of coordinating, statement light fixtures. “This is a home that is meant to be very light and airy,” says Tara Ryan, president at Ryan Young Interiors. “We didn’t want anything taking away from the wood or the view out of the expansive glass.”

In the nearby formal dining area, the team incorporated a brick material called “Bellburn” from Japan. It flows from its use on the home’s exterior to the main wall of the dining room, creating another element that highlights the connection between indoors and out. 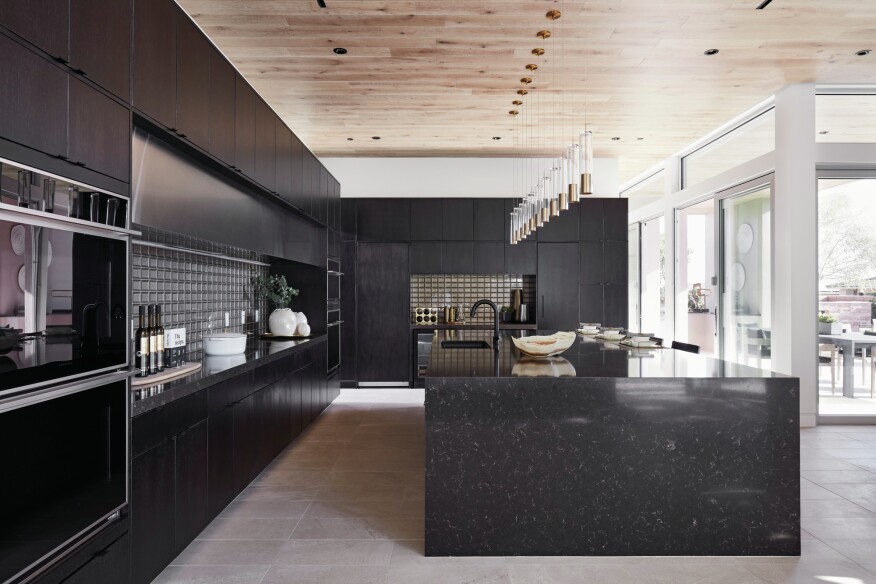 Kitchen
In the kitchen, the design team chose a darker color palette with contemporary flair. A wall of flat-door cabinets in an onyx finish, waterfall edging on the spacious island, and a rectangular mosaic backsplash give the space its clean and simplistic lines—a key factor in eastern design, according to interior designer Tara Ryan. 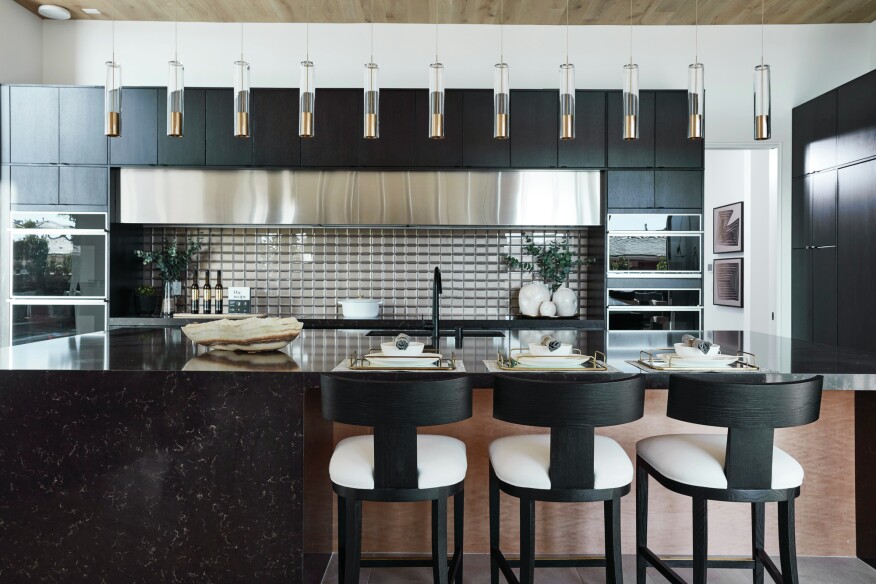 Although the Japanese favor utilizing natural materials in their home designs, the U.S. designers opted for dark quartz countertops—with subtle white veining—to provide richness without all the pattern granite offers. But, notes of Japanese culture were intertwined throughout. The chōwa principle and the “living in balance” theme are showcased by the two symmetrical cabinet and appliance walls.

An adjacent breakfast nook includes a circular dining table and coordinating chairs to provide a space for informal meals, while a messy kitchen and walk-in pantry are hidden away for storage and entertaining purposes. 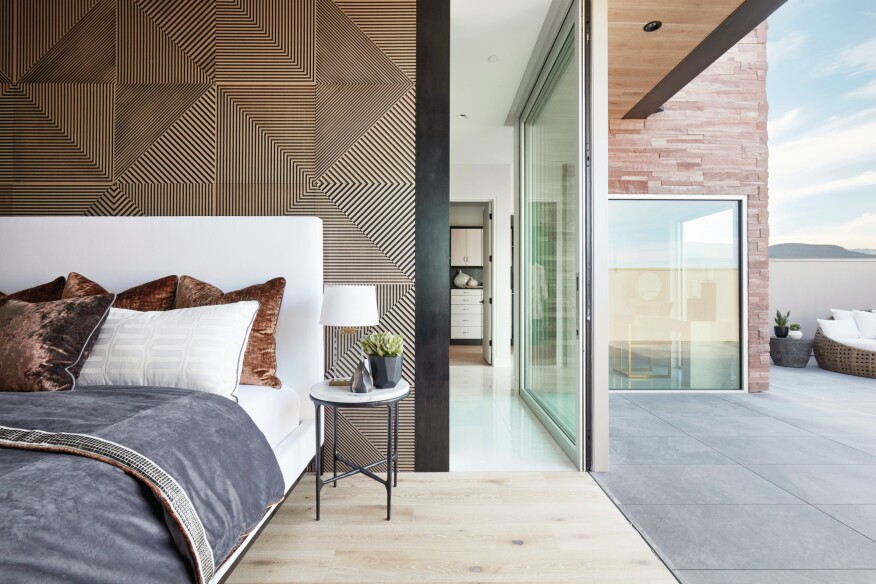 Master Bedroom
Upstairs in the master bedroom suite, the designers created a unique, open layout for the combined bedroom and bath that also sports its own private balcony, two walk-in closets, and a dressing room. A focal wall placed in the middle of the room was added to distinguish the separate spaces.

On the bedroom side, the wall was outfitted with a bamboo-panel series that uses isosceles triangles to create squares and nested geometric shapes. “We wanted to utilize a unique material that would make a statement,” says Ryan Young Interiors’ Tara Ryan. “It’s still a very clean design, but it’s textural and rich.” 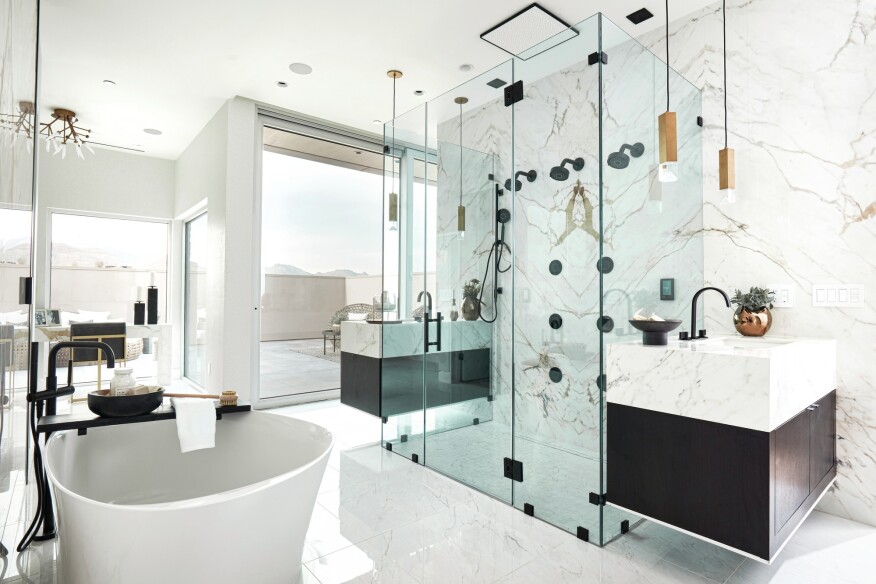 A book-matched porcelain slab was used on the opposite side of the wall in the master bathroom, where the glass-enclosed shower was placed. His-and-her vanities float on either side of the shower, while the freestanding tub—and mirroring book-matched slab—sits adjacent to the sinks and shower to complete the wet area. 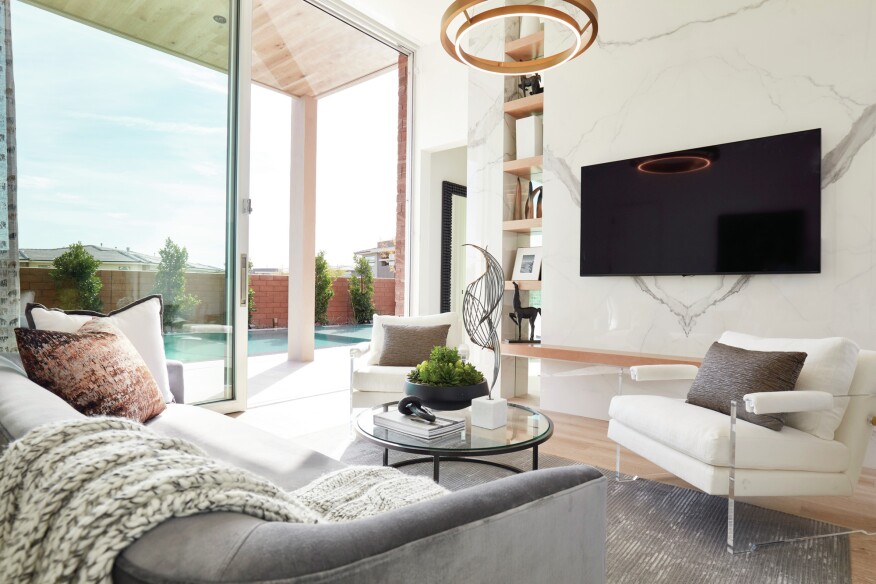 Guest Suite
According to KTGY principal William Ramsey, one of the main goals of this project was flexibility and the home’s ability to work for families in several stages of life. “The mother-in-law or grandparent suite speaks to both cultures,” adds interior designer Tara Ryan. “It’s nice to have their own private area to retire to.”

As a result, the home was constructed with first-level and second-level suites for adult children, parents, in-laws, or live-in help. The first-level suite, located adjacent to the property’s one-car garage, includes a bedroom, bathroom, walk-in closet, and its own living room. Interior design company Ryan Young developed a focal wall for the suite’s bedroom as well, with 2-inch wide wood slats stained to match the overall hardwood and spaced evenly with a dark charcoal accent paint. At night, the wall lights up and adds warm ambiance to the space. 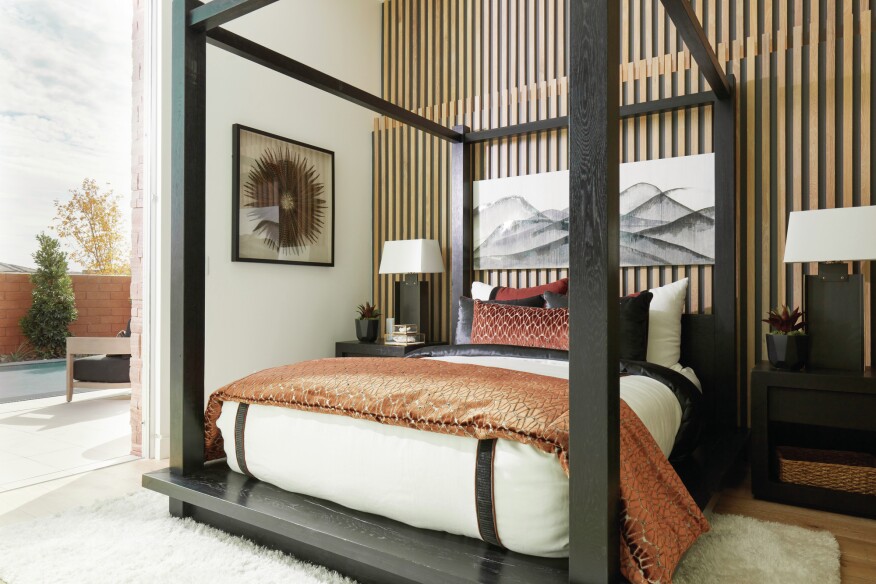 In the suite’s living room, another book-matched porcelain slab was used and expansive sliders give users access to outdoor living in the rear. “You can step out directly from the home suite outside to what feels like a private outdoor area,” says Ryan. 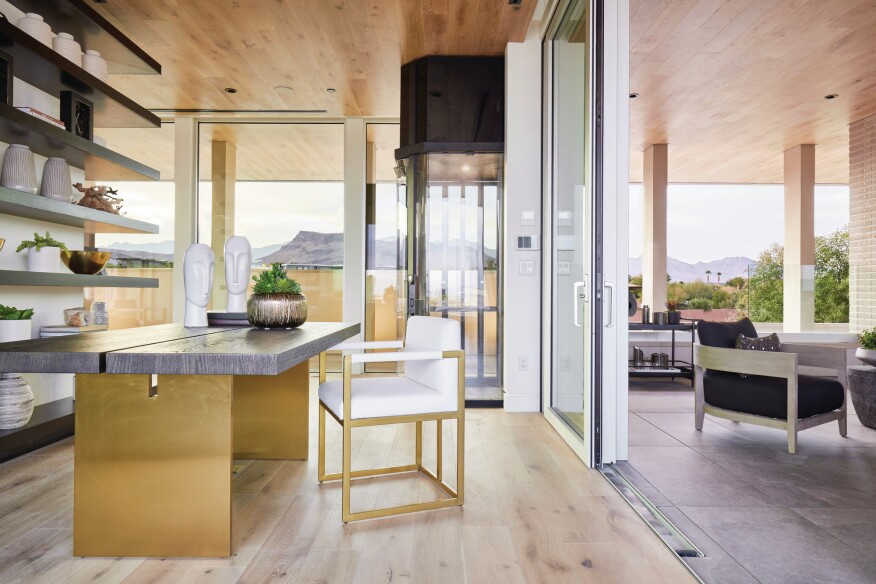 Flex Space
From the first-level home suite, visitors can utilize the elevator to rise to one of the home’s flex spaces and the second bedroom suite, which combined could also be used for extended-stay guests.

Although staged as an office with floating bookshelves, the area—surrounded by exterior balconies—can be used for second-story entertaining, according to the interior design team. A built-in with large cabinet doors conceals a small wet bar. “They saw this as a huge entertainment area,” states Tara Ryan. “People can be downstairs in one of the many outdoor areas and also upstairs because of the incredible views of Las Vegas and the mountains.”

The secondary, smaller flex space overlooks the double-height living room in the central part of the home. With the see-through glass railings continuing to the second story, owners have a clear sightline from the living room to the landing. The designers chose to create a simple seating area with two clear acrylic bubble chairs in order to not obstruct the views from the neighboring balcony. 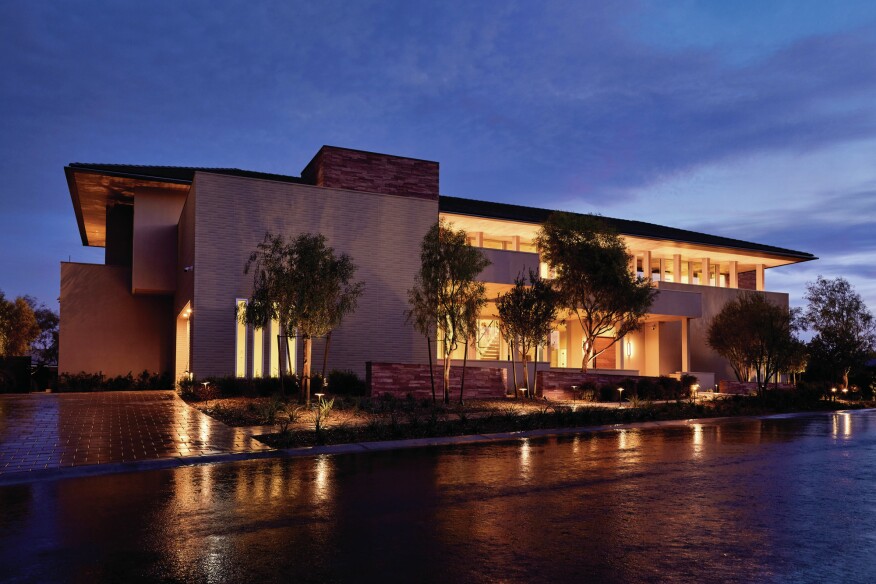 A breakdown of statistics and details from the concept home:
– 22 shipping containers sent from Japan to the U.S.
– 4,766 nautical miles of Pacific Ocean crossed
– 180 yards of concrete for the foundation
– 39,000 millimeters in foundation length, 20,000 in width
– 8.5 days to construct the frame
– 5,470 square feet of living space
Click for Full Article