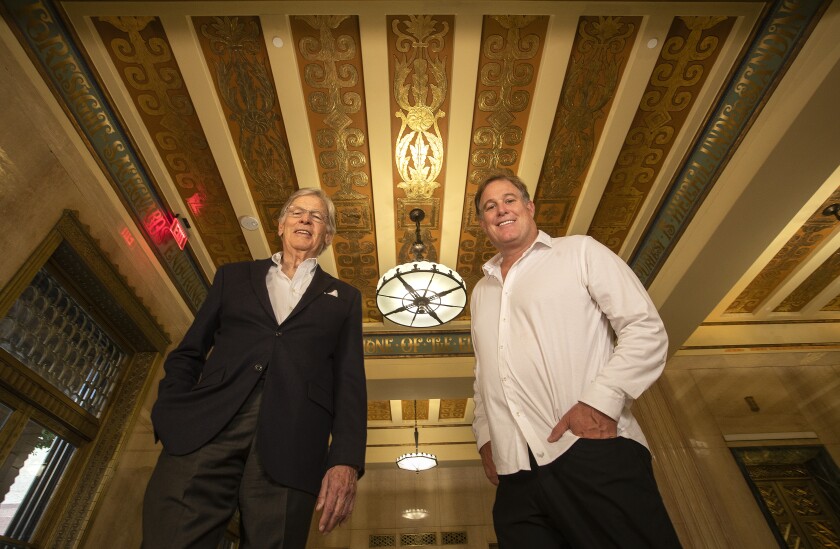 The blocks of Spring Street south of City Hall lagged behind other parts of the Historic Core in downtown’s economic recovery of the last two decades.

But now the area is experiencing a burst of real estate development expected to bring tourists, residents and office workers to the neighborhood, long associated with urban decay.

In a milestone for downtown’s Historic Core, an office building designed in the 1920s by two of L.A.’s most prominent architects has been restored for duty on a recovering stretch of Spring Street a few blocks from City Hall.

The Art Deco-style tower opened in 1928 as the headquarters of the Title Insurance and Trust Co., one of the city’s biggest financial institutions in an era when Spring Street was hailed as the “Wall Street of the West.”

By the mid-1970s, however, the city’s top white-collar firms were moving closer to the Harbor Freeway and the Historic Core, the city’s original downtown, was going to seed. In 1977 a Times columnist lamented that with the title company’s pending departure, “the last of the great fiscal headquarters leaves Spring Street.”

In recent years the imposing structure, designed to signal prestige and power with its finishes of marble, brass and black walnut, has been used primarily as a filming location for period pieces and fantasies such as “Batman.” 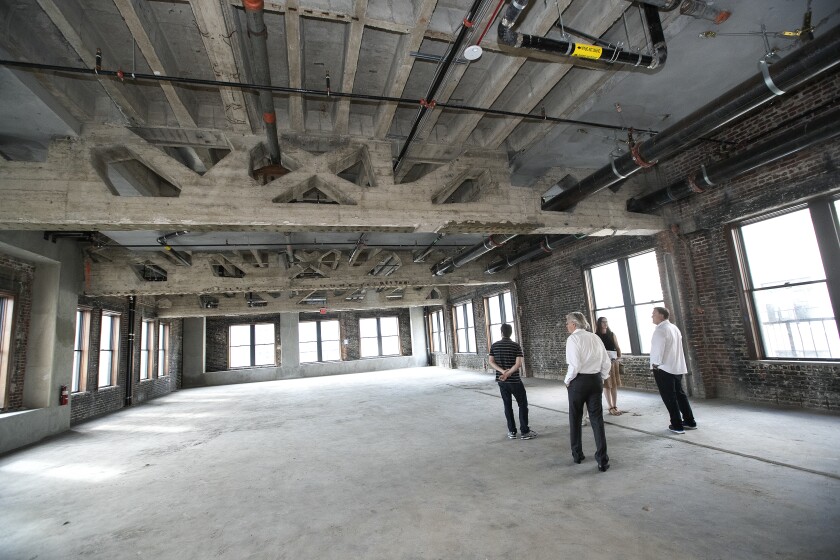 The 10-story building has been mostly vacant for more than two decades, but its new owners, who have previously restored other high-profile historic downtown office buildings, have relaunched the Trust Building after an estimated $40-million makeover that brought it up to modern earthquake safety standards and restored original features such as gilded ceiling decorations that were painted over in late 20th century renovations.

Its developers, Rising Realty Partners and Lionstone Investments, have also signed the building’s first tenant. KTGY Architecture + Planning will move its Los Angeles offices from Playa Vista to the Trust early next year.

The Trust Building is at 433 S. Spring St., near the intersection of Spring and 4th streets, where development has been particularly intense.

A former high-rise garage next door to the Trust Building is being turned into an upmarket Cambria hotel catering to business travelers. Another hotel is being built by Amsterdam-based CitizenM Hotels, which is erecting an 11-story inn with more than 300 rooms on a parking lot at the northwest corner of the intersection. 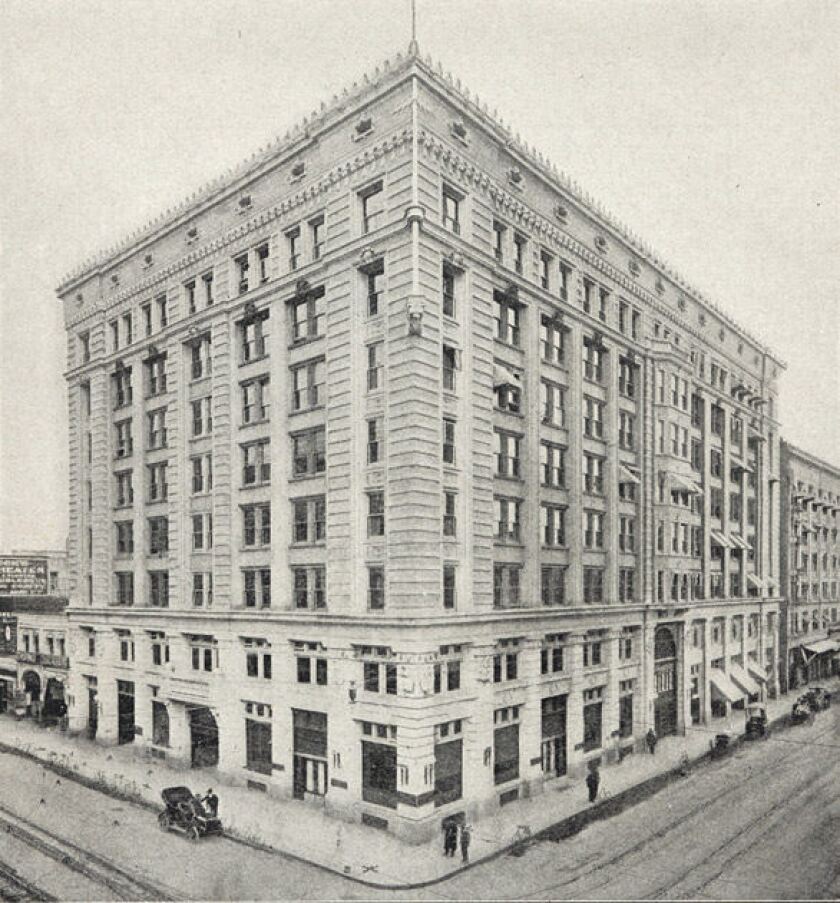 A vintage photo of the Hellman Building. (Outwest)

The Hellman Building, a 115-year-old office building, is being converted to luxury apartments and stores. On another corner of the intersection, the new owners of the Continental Building, erected in 1903, have submitted plans to the city to turn the 12-story tower into a hotel with a rooftop bar and restaurant.

And looming nearby at 4th and Broadway is Perla, a new 34-story condominium and retail complex set to be completed early next year.

“We believe downtown L.A. is now headed back east,” Rising said, filling in old blocks with new activity that will eventually overlap with growth from the Arts District.

The east side of downtown is also proving desirable enough to command office rents that match or surpass lease rates on Bunker Hill and the financial district, where some of the city’s best skyscrapers were built in the 1970s to early 1990s.

One of the most expensive leases ever signed downtown was by audio streaming platform Spotify, which recently agreed to pay more than $5 per square foot per month to be in a new building in the Arts District, according to industry estimates. 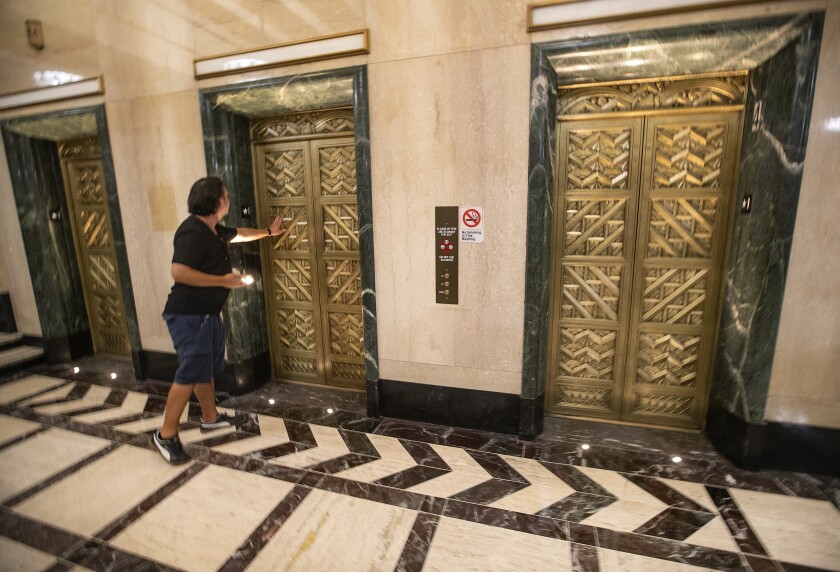 By Rising Realty’s calculation, the Trust Building’s location in the once-blighted Historic Core is more an asset than a liability as growing firms in creative fields including technology and entertainment seek offices outside of longtime corporate enclaves such as the downtown financial district and Century City.

In recent months, Warner Music Group consolidated its offices in a century-old Ford automobile manufacturing plant in the Arts District and online coupon firm Honey agreed to move to a former Coca-Cola bottling plant in the same neighborhood.

Part of the appeal for creative firms, Christopher Rising said, is occupying a building with historic character that has been brought up to standards of modern safety and technology. Potential tenants who have toured the Trust include firms in technology, advertising, new media and architecture, he said.

First to sign was architecture and planning firm KTGY, which has designed housing and retail projects such as the 438-unit One Santa Fe complex in the Arts District.

“We are seeing so much work in the downtown area that it’s time for us to be there,” Chief Executive Tricia Esser said. “So many new things are happening there.”

The firm will move nearly 50 employees early next year to offices in the Trust that include an outdoor deck it will use to host events, she said. The building’s design pedigree was also a factor in the firm’s decision to move there.

“It suits us to be in a building that speaks so well for architecture,” Esser said of the building, designed by the father-and-son design team of John and Donald Parkinson.

The architects were behind some of L.A.’s most famous structures, including City Hall, Union Station and the Bullocks Wilshire department store.

The Trust Building is “an under-appreciated gem” in the Parkinson pantheon, said Los Angeles author Stephen Gee, who wrote a book on John Parkinson. The architects brought in Hugo Ballin, a local artist who painted the murals at Griffith Observatory, to create tile murals above the front entrance depicting allegorical figures in Greco-Roman garb that symbolize Trust, Protection and Fidelity. Inside the Trust Building are decorations painted by local artisans in the 1920s. (Mel Melcon / Los Angeles Times)

Inside the lobby are decorations hand-painted by 1920s artisans, including slogans written in gilded paint such as “Trust is the keystone of the edifice of society.” Much of that work has been restored after having been covered in paint during earlier renovations.

The Parkinsons moved their offices into the building after it was completed, Gee said, and John Parkinson was working on plans for Union Station there at the time of his death in 1935.

Rising Realty Chairman Nelson Rising, Christopher’s father, coincidentally started working at O’Melveny & Myers in the Trust Building in 1966. At the time, Spring Street was still home to major banks, financial regulators and the firms that worked with them.

“This was the place to be,” Nelson Rising said.

Betting that it could be again, Rising Realty and its financial partner Lionstone Investments bought the building in 2016 for more than $80 million, according to real estate data provider CoStar. At 340,000 square feet, it is one of the largest structures in the neighborhood. 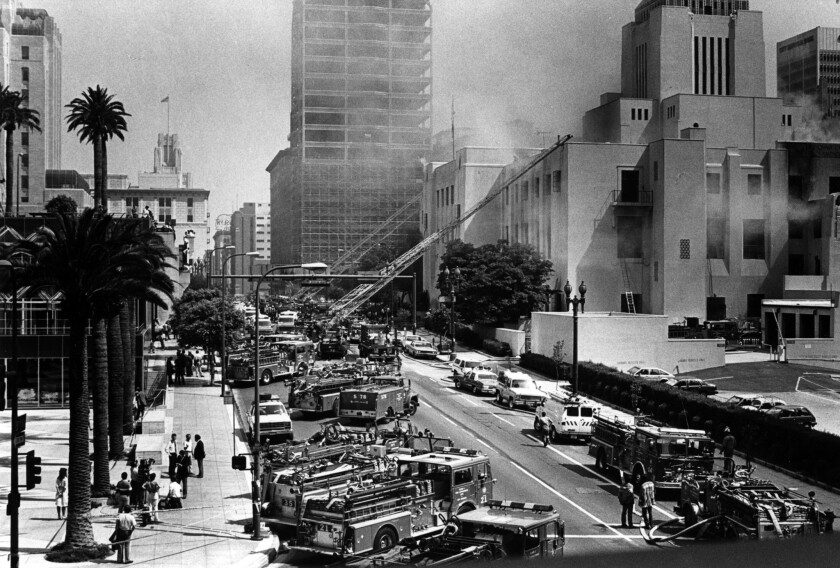 A fire at the L.A. Central Library in 1986 led the city to use the Trust Building as its downtown library while the fire damage was repaired. (Jack Gaunt / Los Angeles Times)

During the 1980s the building served as a home furnishings design center, and from 1989 to 1993 it housed the Los Angeles Central Library after a fire damaged the permanent location on 5th Street. The lack of tenants since then has been a boon to people who make films, television shows and music videos.

Location manager Larry Ring told L.A. Weekly it is “a great old building; you’d be stunned how much shooting goes on there.” Ring was interviewed about his workthere with director Paul Thomas Anderson, who employed it as a stand-in for the Hall of Justice in his 2014 comedy-drama “Inherent Vice.”

Other recent movies shot there include “The Dark Knight Rises,” “The Master” and “Divergent.” Among the television shows are “Mad Men,” “NCIS” and “Agents of Shield.”

As the Trust Building returns to its original use as an office tower, Rising Realty will add a coffee shop and restaurant, along with a rooftop bar and event space for weddings and other functions. Other modern touches include a gym and bicycle storage for tenants who ride to work. 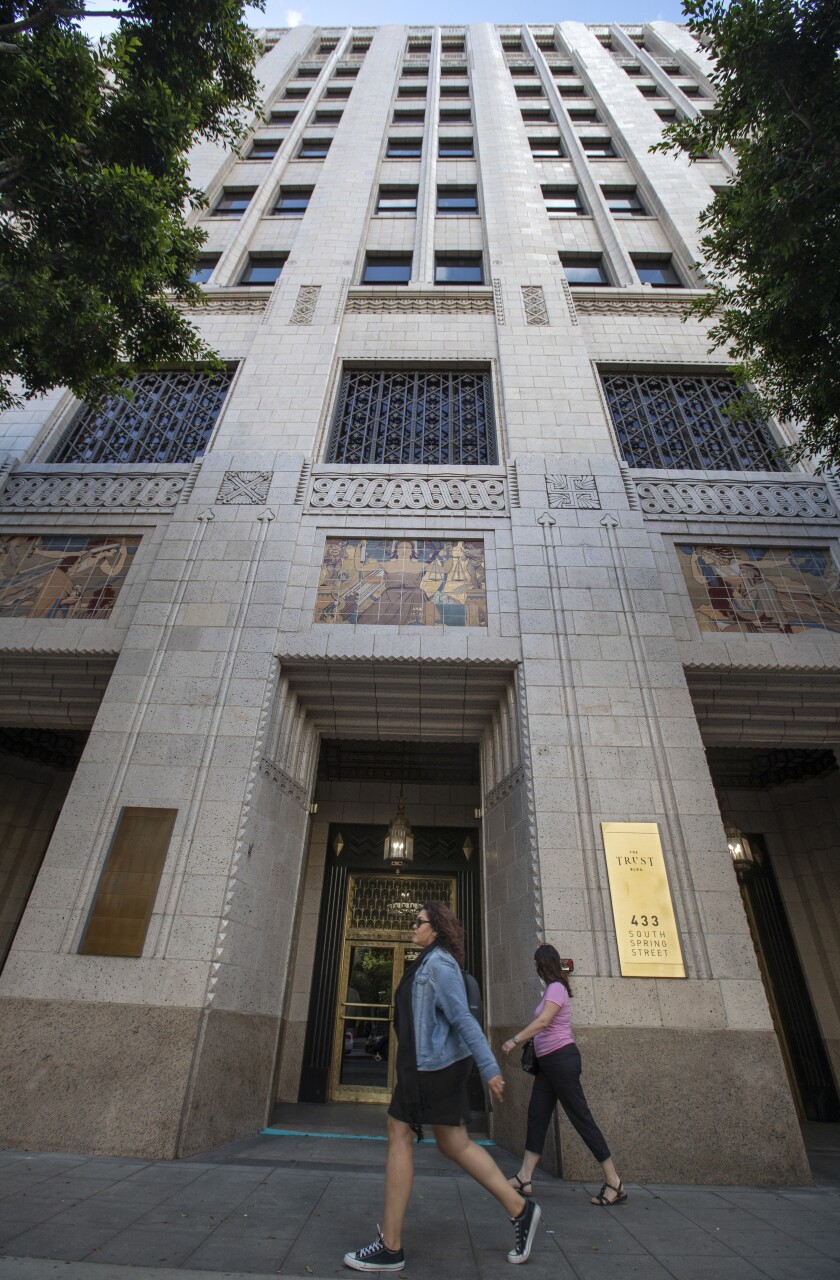