In Los Angeles, a city known for its cars, high-end buyers increasingly want homes within steps of bars, restaurants and sports venues

From his luxury condominium in Beverly Hills, Calif., David Henry Simon can walk to his favorite restaurants. In the morning, he steps out for coffee or strolls to a nearby grocery store, where the cashier knows him by name.

Located at the Montage Beverly Hills, a five-star hotel, the three-bedroom, 2,600-square-foot home Mr. Simon bought last summer is steps away from the upscale stores and eateries around Rodeo Drive.

“There are days when I don’t touch the car,” says Mr. Simon, a lawyer, real-estate investor and native New Yorker. “It’s just like when I was growing up in Manhattan.”

Meet the hottest new amenity in Los Angeles luxury real estate: walkability. In the city known for its car culture, more high-end home buyers want a neighborhood feeling and the ability to walk to urban attractions. 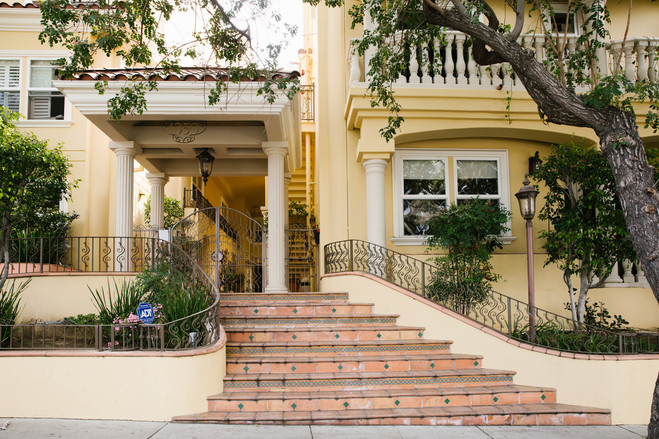 Mr. Doyle paid $950,000 for a unit in the Mediterranean-style complex. PHOTO: JESSICA SAMPLE FOR THE WALL STREET JOURNAL 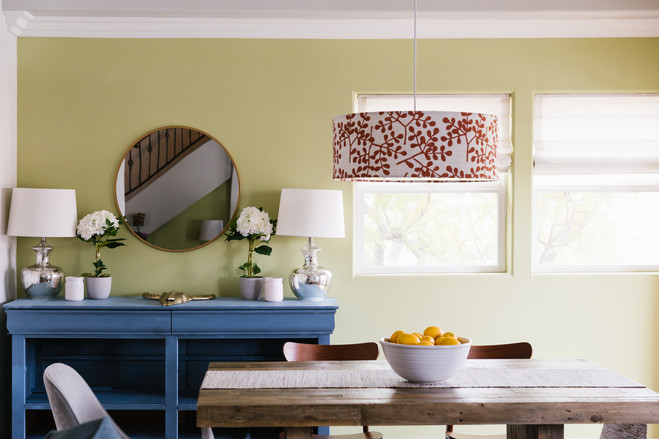 “If you want to be in the epicenter of L.A. culture and what makes L.A. great, you can’t enjoy it if you’re sitting in the car for 45 minutes,” Mr. Doyle says. PHOTO: JESSICA SAMPLE FOR THE WALL STREET JOURNAL

The shift comes as locals are growing weary of worsening traffic and high-priced parking, and as community-oriented millennials are gaining market power. Fueling the trend is a slew of new luxury condo buildings where, developers are hoping, buyers will pay a premium for proximity to urban life. While for most Angelenos, luxury living still means a home in the hills with a private pool and garage, some now share walls in exchange for the ability to run out for a bagel in the morning, a beer at night or a chat with neighbors at the dog park.

“Things are changing in L.A.,” says Cory Weiss, president of western region development marketing for Douglas Elliman real estate. “People are flocking to new developments in areas where they can walk.”

The firm is marketing six projects in the city that involve “vertical living,” as real-estate professionals call condo buildings, in walkable areas, several of them around Sunset Boulevard. At one, the Residences at the West Hollywood Edition, 20 condos sit atop a new boutique hotel designed by Ian Schrager and start at $5 million.

Los Angeles’ luxury condos can cost as much as a Malibu mansion. Beverly Hills’ Mr. Simon wouldn’t say how much he paid for his home at the Montage, which has high ceilings and a view of the Hollywood sign. But a similarly sized, three-bedroom unit in the building is currently listed for $9.5 million. Two units recently sold for roughly $4,000 a square foot, according to Soren Olsen, director of sales of the residential brokerage at Redwood City, Calif.-based Ohana Real Estate Investors, which owns the Montage Beverly Hills. Mr. Simon, who is single and in his 70s, also owns an oceanfront house in Manhattan Beach but added the condo partly because he “missed just walking places.”

Foot-friendly city life is drawing buyers to downtown Los Angeles, which has become a more vibrant urban center in recent years. Kerry Moy, a portfolio manager with Morgan Stanley Wealth Management in Los Angeles, bought a one-bedroom condominium in the Ritz-Carlton Residences at LA Live, near the Staples Center entertainment complex, for $1 million in 2012. He initially planned to use the apartment, with contemporary finishes and floor-to-ceiling windows, as a second home but spent so much time there that last year, he added a two-bedroom unit next door for $1.7 million.

While he still drives—impossible to avoid altogether in Los Angeles, he says—Mr. Moy, 59 and newly single, enjoys grabbing an iced vanilla latte at the coffee shop in his building on his way to his office, also downtown. He walks to concerts, basketball and hockey games at the Staples Center, or to nearby restaurants such as Triple 888, a Chinese bar and grill he has invested in. Mr. Moy, who is originally from Chicago but has lived in Los Angeles for over 30 years, feels the property will appreciate alongside the ongoing revitalization of downtown. “An area in transition is an area of opportunity,” he says. 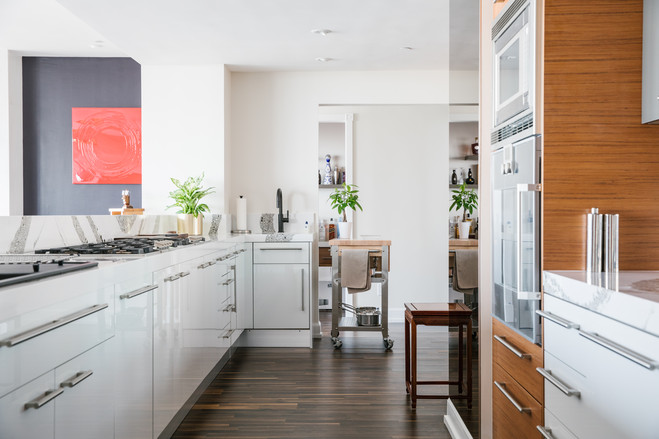 Kerry Moy, a portfolio manager with Morgan Stanley Wealth Management in Los Angeles, bought a one-bedroom condominium in the Ritz-Carlton Residences at LA Live, near the Staples Center entertainment complex, for $1 million in 2012. PHOTO: JESSICA SAMPLE FOR THE WALL STREET JOURNAL 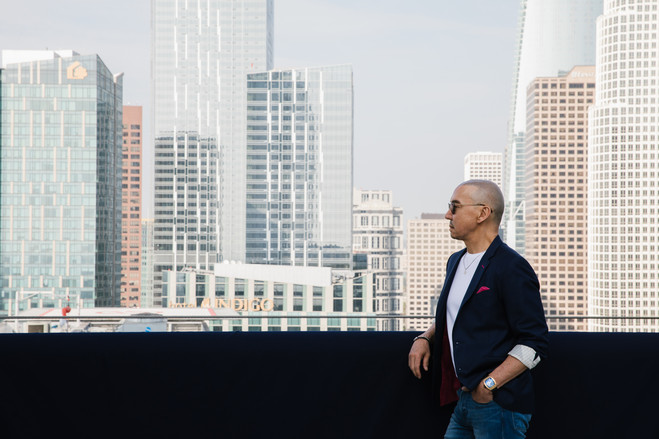 Mr. Moy, 59 and newly single, enjoys grabbing an iced vanilla latte at the coffee shop in his building on his way to his office, also downtown. PHOTO: JESSICA SAMPLE FOR THE WALL STREET JOURNAL

Real-estate website Redfin, which calculates “walk scores” to grade neighborhoods’ walkability on a scale of 1 to 100, says that an increase to 80 from 60 adds an average of $129,000 to a property’s value in Los Angeles. Downtown Los Angeles, the neighborhood ranked most walkable, boasted a median home price per square foot of $679, well over the citywide median of $449, in March, the latest data available. MacArthur Park, a nearby district that scores second-highest for walkability, was also higher than the median at $471.

Urban-style condominium living is growing in popularity across all price points. In August, comedian Richie Doyle paid $950,000 for a two-bedroom apartment in a Mediterranean-style complex in West Hollywood, an area popular with young buyers for its culture and nightlife.

Mr. Doyle, 25, can see celebrities arriving for events at Delilah, a lounge and restaurant on Santa Monica Boulevard. On Valentine’s Day, Mr. Doyle and his girlfriend walked to dinner at Norah five blocks from their house. At night, the couple says, the area feels like New York’s Greenwich Village.

“If you want to be in the epicenter of L.A. culture and what makes L.A. great, you can’t enjoy it if you’re sitting in the car for 45 minutes,” he says.

The city of Los Angeles is encouraging car-free living. Along with extending public transportation, it is making streets more pedestrian-friendly, with wider sidewalks, benches and trees. It is also encouraging construction near transit hubs. 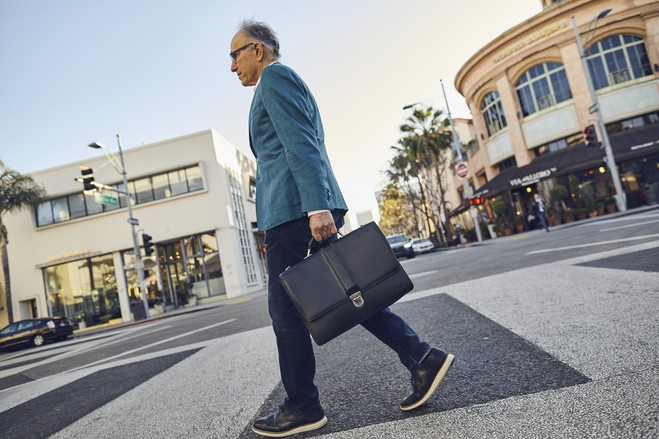 From his luxury Beverly Hills condo, lawyer and real-estate investor David Henry Simon can walk to his favorite restaurants and shops. PHOTO: ZACHARY BAKO FOR THE WALL STREET JOURNAL

Eric Yang and Lauren Kawabata drive to work but can walk to most other places. Married in December 2016, the couple went to Japan for a honeymoon before starting to house-hunt in the spring of last year. So when they saw a newly built three-bedroom, 2,000-square-foot condo around Memorial Day in Silver Lake—complete with a roof deck and view of lush palm trees—they bought it for just over $1 million by Labor Day. On its website, Newport Beach, Calif.-based developer Planet Home Living touts the homes’ location “in one of L.A.’s hottest neighborhoods near shopping, dining, markets and more.”

On Saturday mornings, Mr. Yang, an accountant at EY, and Ms. Kawabata, a pharmacist, walk to the farmers market and to get his tea and her latte at the Blue Bottle Coffee shop on Sunset Boulevard, a 15-minute walk from their contemporary condo complex, Covo Silver Lake. If Mr. Yang, 30, and Ms. Kawabata, 29, get home from work early, they stroll to area restaurants such as Silverlake Ramen or Wood, a pizzeria featuring wood-oven baked pizza. Mr. Yang says the cost of parking in Los Angeles makes the couple want to drive less. Above all, it was the car-free trip to Japan that sparked their interest in a convenient, walkable neighborhood.