Developers Chelsea Investment Group and Sudberry Properties broke ground on the project this weekend. The cost to build the 306-unit complex is $137.5 million, or $449,000 per unit, inside the luxury master-planned community.

It will be the second low-income project in Civita, a 230.5-acre residential development that is expected to have up to 4,780 housing units, 900,000 square feet of retail and office space, as well 67 acres of parks, trails and open space. The development is tied to Civita’s inclusionary housing requirement to provide subsidized housing.

Marco Sessa, senior vice president at Sudberry, said it could have paid in-lieu fees instead of building low-income housing on the site.

“I think in communities it is always nice to have a broad spectrum of people,” he said, “different incomes and different demographics. I think it will help create a really well-balanced community.”

Applications will not be accepted until six months before the complex is completed, but interested renters can register at AptsInSoCal.com. A final completion date is not set yet but construction is expected to take two years.

Another bonus of living there: Renters will not be required to pay homeowner association fees that other residents of Civita need to pay to access pools and parks. Stylus and Siena will also include three courtyards, a clubroom with a fully equipped kitchen and barbecue areas.

Cheri Hoffman, president of Chelsea, said placing the project inside the Mission Valley project gives families and seniors the chance to enjoy the benefits of close transit and good schools.

“You really achieve a full integration of affordable housing, workforce families, within what could be considered a luxury master-plan community,” she said. 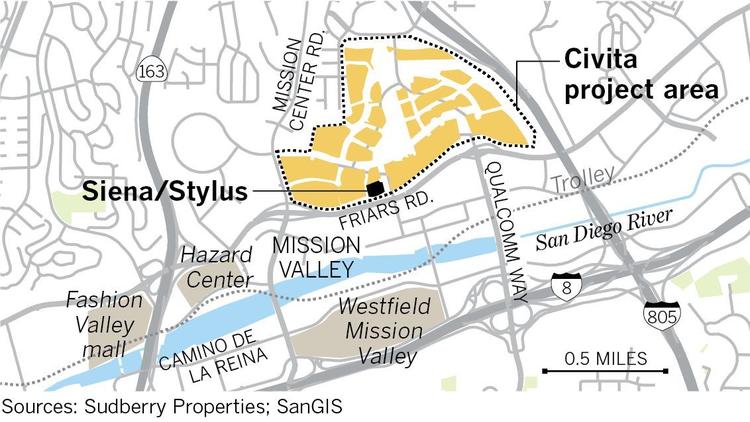 One seven-story building will house both Stylus for low-income families and Siena for low-income seniors. A lease has already been signed for first floor retail for L.A. Fitness and it will have three floors of below-ground parking.

Stylus has 203 two- to three-bedroom apartments and Siena has 103 one-bedroom and studio apartments.

Civita still has roughly 10 years until final build-out, but it is already a hot spot for sales and rentals.

There are two market-rate apartment rental complexes in Civita, West Park and Circa 37. Real estate tracker CoStar says average rent is $2,365 a month at West Park and $2,631 a month at Circa 37. Both are higher than the average San Diego County monthly asking rent of $1,632 in the first three months of the year, said CoStar.

There are several housing projects still selling that vary in price based on size and location. Townhomes in The Heights at Promontory start in the mid-$600,000s; Townhomes at the Bluffs at Promontory start in the mid-$800,000s; Townhomes at Elevate run from the $600,000s to the $900,000s; Lucent II townhomes start at $1 million. The county median home price was $535,000 in February, said CoreLogic.

This will be the second low-income project for Sudberry and Chelsea at Civita. The first was Versa, a complex for low-income seniors with 148 units. It opened in March 2015.

The effect of low-income complexes in neighborhoods is a hotly debated subject, especially when it comes to home values. A recent research paper by Stanford economists Rebecca Diamond and Tim McQuade said subsidized housing financed by low-income housing tax credits increases home prices 6.5 percent in low-income neighborhoods within a tenth of a mile of the site. However, it said home prices decline by 2.5 percent within a tenth of a mile in wealthier areas (median income about $54,000 a year) when subsidized housing goes there.

However, Diamond and McQuade said the stated goal of many subsidized housing advocates is to reduce segregation — something the projects seem to be doing.

The economists came to their conclusions by studying multifamily developments constructed from 1987 to 2008.

The general contractor for the project is Emmerson Construction and the architect is Irvine based-based KTGY. 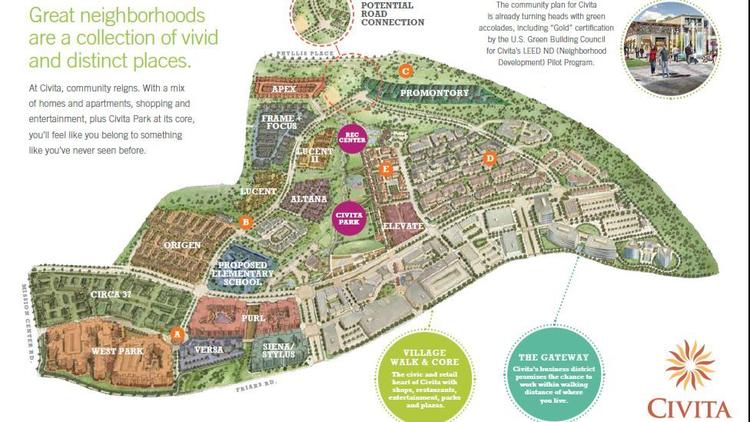