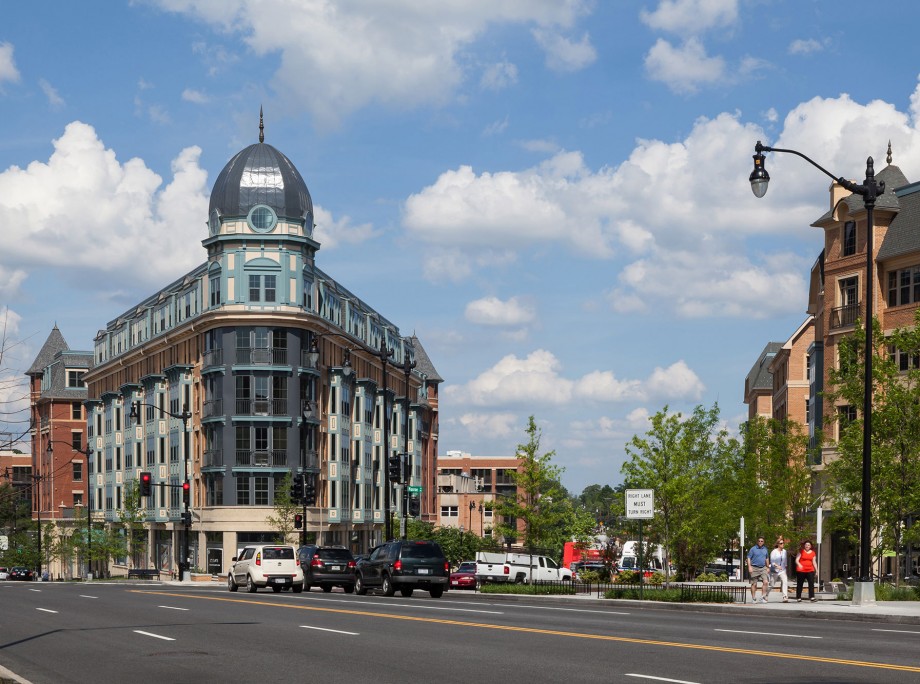 WASHINGTON, DC—Even though it is only six miles from the US Capitol Building, the neighborhood surrounding Catholic University was a “sleepy corner of Washington, DC,” says Bozzuto Development vice president Michael Henehan. And it was a neighborhood the developer had been eyeing for some time.  What they created when the opportunity finally arose resulted in this, the next finalist in our series on the NAHB Pillars of the Industry Awards. (To register for the awards presentation, click here.)

Mission:  As one might imagine, and Henehan himself states, a community that Catholic University of America and Trinity Washington University would have a sense of tradition and architecture as well as a mix of students, faculty, people in the religious life and families. There was also a strong arts presence in the community, with the 35-year-old Dance Place, a popular draw for professional training and performances. But they were essentially all separate communities, and no unifying theme to bring them all together. The area also benefited from the local Metrorail station.

“We, as a company, have been very interested in tracking the area for these reasons and for a very long time,” Henehan explains, “and when the opportunity presented itself to develop nearly 10 largely abandoned acres in the heart of the neighborhood, we jumped at it.”

The overall mission, he continues, “was to knit this community together—the school, the neighborhood, the religious organizations, and bring some new folks to the neighborhood. We wanted to pump new energy into this fantastic neighborhood.”

Execution: Henehan explains that the scale of the project had to be right, and it had to serve as a gathering place for the community and provide the right mix of retail and housing for both to be successful. The developers also wanted to create a strong connectivity with the Metro, which clearly serves as a feeder for all of the features of the neighborhood.

The final design of Phase One called for three housing assets catering to different clientele and all offering a share of the retail that would ultimately help define Monroe Street Market.

All of the buildings would be market-rate (with a share of affordable in each, in keeping with DC’s inclusionary zoning practices), but each would provide a very different feel. According to the developer, Brookland Works was geared to young professionals and new families and exudes an industrial/arts flavor, while Portland Flats would aim for Catholic University students and Cornerstone would appeal to empty nesters looking to downsize. (There is also a collection of townhomes—Gallery Towns—which the NAHB application describes as “a great option for families looking to add extra space and serenity to their busy lifestyles.”) To further the community involvement there would also be a 3,000 square-foot facility to serve as flex/meeting space. And this was just Phase One. Phase Two will add another 158 more homes and 26,000 square feet of retail.

End Game: Henehan says that there are a few ways to measure the success of the project. “Financially, the residential side is stabilized at 95% occupancy, which is great for 562 units in a market with a lot of supply.”

On the retail front, the project is close to 80% leased with, “a great mix of retail. It was challenging at times to bring in the folks we really wanted rather than the typical easy retail,” he says. “We focused on creating a local feel but also adding some great national tenants. And that’s what we’ve created.” So you will see a Chipotle Mexican Grill as well as funky Busboys and Poets.

And the flex space has held its own as well, hosting everything from karate classes to weddings. To top it all off, the street leads directly to the Metro station.

But the clearest symbol of Monroe Street Market’s success is the mingling, says Henehan. It’s “the wide variety of residents and retail customers we have. We draw neighborhood folks, students, faculty, nuns, moms and dads with their kids. It’s a fantastic spectrum of people coming together in the project.

“This was a great addition to the neighborhood,” he concludes, “and it was what we had always hoped for.”