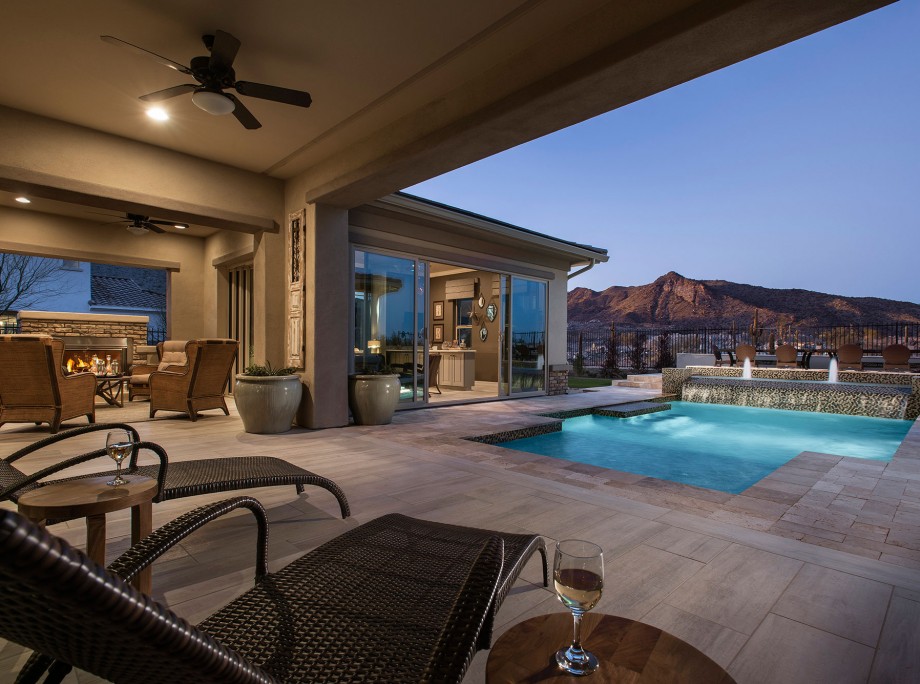 The most interesting current trend in exterior doors has less to do with the doors themselves than with how they fit into larger patterns in buyer demographics and home design, which are having a major impact on this product category. Salespeople who understand these trends should be better positioned to take advantage of them.

Looking ahead, researchers and designers expect that homeowners’ desire to connect indoor and outdoor spaces will continue to be reflected in door packages. Those door packages, in turn, will have a growing influence on home design.

Looking Inward
The desire for the indoor-outdoor connection has of course fueled the growing popularity of large-span patio door systems, which several companies now make. Examples include NanaWall’s bi-fold and folding glass wall systems, Milgard’s bi-fold glass walls, Jeld Wen’s multi-panel accordion-style doors, and Marvin Integrity’s 4four-panel sliding French door, to name a few. By creating wall openings as wide as 24 feet, these products merge the patio and the living room or kitchen into one space.

The most recent twist is that these products are helping fuel a surge of buyers who want exterior courtyards enclosed on all four sides, faced by walls of glass.

Demand for these spaces started in California, but is quickly moving to other parts of the country, according to Nick Lehnert of KTGY Group, an architecture and planning firm in Irvine, Calif. “We’ve been designing courtyards in Phoenix and are starting to do them in Texas,” he says, adding that the company will soon be including them in homes in Florida and North Carolina.

Lehnert points out that courtyard designs are well-suited to multi-generational homes that include older people who have moved back in with their children and grandchildren. Each member of the family likely will be happier if his or her space is private. “A courtyard can help separate the guest suite [where the grandparents live] from the house, so everyone gets privacy but is still accessible,” he says. When they want togetherness, members of each generation can open up their wing of the home to the central family space.

What’s significant, says Lehnert, is that people also want this connection space to be private. He call it a wish to “disconnect to connect”—to unplug from technology in order to spend time with family members. “We’re seeing that families getting back together tend to want a more privatized outdoor space,” he says.

Courtyard designs provide this space while solving the privacy and security problems posed by those big glass doors. When a large expanse of glass faces the interior of the house, the homeowners need not worry about closing the curtains at night to hide that large-screen TV or other valuables. There’s also a performance benefit: Doors and windows facing the protected are less subject to wind-driven rain.

Not surprisingly, courtyard designs with moveable glass walls are most common in the upscale home market. Luxury homebuilder Toll Brothers, for instance, is positioning them as a way to create a quiet outdoor oasis even in a home on a busy street. Dan Sater of luxury home plan company Sater Design also reports rising interest in this feature at saterdesign.com. “Many homebuyers are liking the fact that they get a beautiful view no matter where their land is located,” he writes.
Expanding Demand
While the courtyard home will likely remain a high-end phenomenon, those moveable glass walls are catching on with owners of less expensive properties. Again, the driving factor is demographics.

A recent survey of 29,000 consumers by John Burns Real Estate Consulting found strong interest in glass walls among all buyer groups. “We have found that when it comes to big sliding glass doors or accordion kitchen windows, more than 70% of buyers across the country want them,” says company principal Mollie Carmichael. What’s more, a growing number say they are willing to pay for it. According to Carmichael, 73% of the survey’s respondents said they would be willing to pay an additional $4,000 for a retractable slider for that private, back-of-the-house glass option.

She also pointed out that homeowners’ desire to open up to the outdoors is a big factor behind the growing interest in modern and transitional homes, which include simple architectural lines and lots of glass. In fact, consumers’ preference for modern styling rose 13% in this year’s survey when compared to last year. “We hardly ever see big jumps like that,” she says.

According to Carmichael, there is particularly strong interest in large glass doors among empty-nesters. Many in this demographic are seeking to move into a smaller home for budget reasons, but want to maintain the feel of the larger space they’re coming from. The natural light from a big slider or bi-fold will help with that because it makes the home feel bigger on the inside. “People want a 1,500 square foot home that feels like a 2,500 square foot home,” Carmichael says. “Natural light is a big part of that.”

She believes that the size of this group is good news for companies that make, sell, and install doors. “Boomers are the number one shoppers in the market looking for a home,” she says.