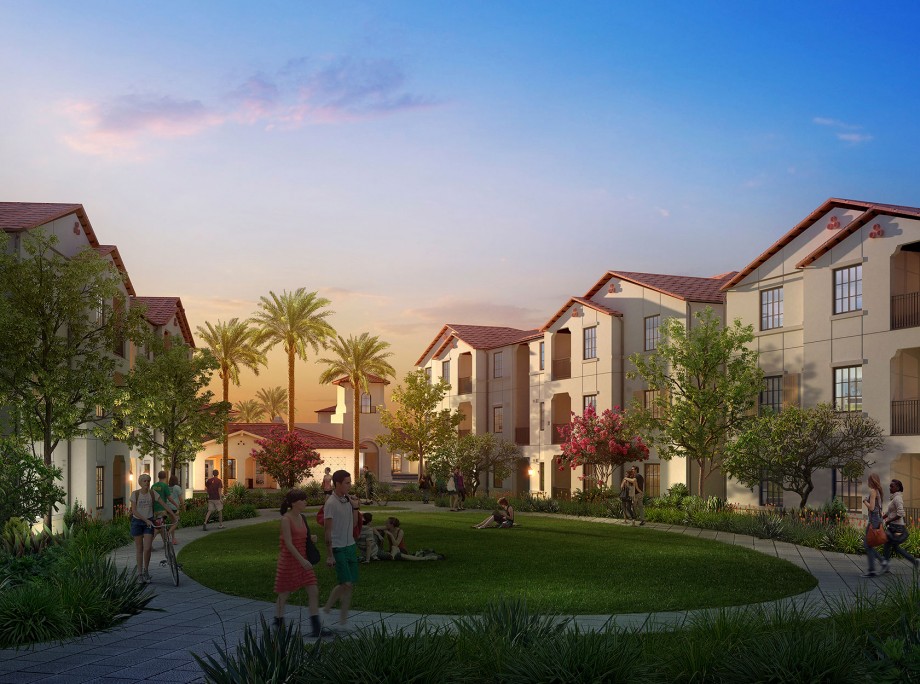 Although e-commerce has proven to be a disruptive force in the shopping center universe, a majority of retail sales still take place in brick-and-mortar stores. According to the U.S. Census Bureau, e-commerce sales in the fourth quarter of 2017 accounted for 9.1 percent of total sales. But it takes more than a dynamic tenant mix to ensure consumers are satisfied. The desire for experiences is rising, and consumers’ expectations continue to evolve, so developers must push the creative envelope to ensure these needs are met.

From ground-up construction to redevelopment and adaptive reuse, developers across the country are reimagining their mixed-use centers and creating an experience for consumers through innovative landscape design.

“We see landscape design as a vital part of the overall design vision,” says Rohit Anand, managing principal with KTGY Architecture + Planning who is based in the firm’s office in Tysons Corner, Virginia. “We look to facilitate dialogue and emotional engagement between the customer and the built environment in ways that express the story in authentic, emotional and memorable experiences.”

CREATING A SENSE OF PLACE

Facilitating this connection with the consumer requires more than just planting a few trees and flowers.

“Plant materials are really just one of the tools that we’re using,” says Bob Hughes, principal with HGOR. The Atlanta-based architecture firm is leading the design of Assembly, a massive redevelopment of the former Doraville General Motors plant, located roughly 16 miles north of downtown Atlanta. At full build-out, the project could span up to 10 million square feet.

“What we’re really doing is creating place,” says Hughes. “And the uniqueness of place and the authenticity of that place is really what brings people to it.”

The $1.5 billion project was built around integrating architectural elements from the remains of the historic automotive plant.

From the roads people drive on down to the spaces they shop in, the existing features of the General Motors plant will be incorporated, says Chris Mutter, principal with HGOR. “We’re going to reuse that material to create walls and different individual elements that people can touch and interact with down to the micro level.”

According to Matt Samuelson, chief operating officer of The Integral Group — the developer behind Assembly — the development team had an ongoing operation to manufacture everything from recycled concrete slab to planters, benches and retaining walls.

“From all things in its inception, all the way down to the end user, we’ve had a very broad sustainable strategy for the site,” says Samuelson.

A highlight of Assembly is a 16-acre park and greenspace that will include a stormwater system with bioswales, permeable paving and streetscapes, and basin hardscape improvements. More than 160,000 tons of recycled concrete material will be used at the project, and approximately 10 acres of existing plant concrete will be used as streets.

In addition, Assembly will include a two-mile reclaimed rail tracks network that weaves throughout the property and follows the existing tracks used by General Motors. Dubbed Assembly Line, the trail will be rehabilitated and naturally landscaped to form a public pedestrian and bike path, and will serve as a public gathering space, a place for art and sculptures and a direct route to food and beverage tenants.

“We’ve been blessed with a palette of fun funkiness, but that palette itself won’t create this environment,” says Mutter. “We have to use this palette artfully and always keep in mind the user and the user experience.”

Landscape design is often a development’s most visible amenity. Typically, developers allocate 5 to 8 percent of their total construction budget to landscape design, according to Shelby Gleba, marketing director for Lifescapes International.

In South Carolina, Lifescapes is designing the landscape for two mixed-use redevelopments in Myrtle Beach: Barefoot Landing and Broadway at the Beach. The California-based landscape architecture firm is responsible for entertainment-driven landscape designs including The Grove in Los Angeles; Pacific City in Huntington Beach, California; and Station Park in Farmington, Utah.

At Barefoot Landing, Lifescapes will add blue stone and brick pavers throughout the center to reflect the look and feel of Charleston. At Broadway at the Beach, the company plans to incorporate recycled brick from New Orleans to give the property a nostalgic feel, and will implement a new architectural style built around the concept of a repurposed warehouse district.

“While guests might not be able to articulate why they love the places we create, once on the property, they will have a sense of comfort, relaxation, discovery and beauty,” says Al Amador, senior principal and landscape architect at Lifescapes.

“The careful combination of these components lifts the guests’ experience of the place, and elevates it to one that guests will want to stay at and visit again and again.”

Developers can also work to create a sense of place through gathering spaces that encourage community and facilitate interaction between consumers. In addition to driving traffic to a retail center, these spaces create comfortable environments that encourage consumers to stay at a center longer.

KTGY is leading the design of University Village, a mixed-use student housing project located adjacent to Florida Gulf Coast University in Estero, halfway between Naples and Fort Myers. The retail portion of the project is oriented toward a central paseo, with a main courtyard facing the lake and the residential buildings. The community will create an environment where students, faculty and staff can meet, shop and eat.

“Creating an experience for the consumer is vital and gathering and activity areas can promote that,” says Anand of KTGY.

Amador of Lifescapes agrees that central gathering areas are an integral part of the firm’s design strategy.

The redevelopment at Barefoot Landing will include 45,000 square feet of new retail space, a new restaurant district, the addition of an amphitheater and a new boardwalk. In addition, Lifescapes will add more shaded patio space throughout the center and a water entertainment feature that will incorporate music and fireworks.

“We are creating zones where people can gather for periodic events,” says Amador. The lawn area will be used for car shows, a farmers market, art shows or other local regional events. The addition of an amphitheater will enable Barefoot Landing to host concerts, movies in the park or other group activities. In addition, Amador adds that the redeveloped landscape will include family picnic zones with a large shade tree, tree house and benches.

“The overall enhanced landscaped environment will provide a lush, comfortable backdrop for guest areas, encouraging them to stay, play and enjoy the destination to its fullest potential,” says Amador. “The patios and added seating will increase the guests’ length of stay, encourage interaction with one another and encourage interaction with the surrounding retail offerings.” Amador says Lifescapes strives to create mini-destinations within destinations.

“These are areas that provide endless opportunities for gathering, socializing and interacting, while being monetized for financial success at the same time.” Atlantic Station, a high-profile mixed-use development in Atlanta, is also in the midst of a repositioning that will include a complete overhaul of the project’s Central Park area. Atlantic Station hosts more than 300 public events every year, and the new space will be able to accommodate events both large and small.

“From things as big as the holiday extravaganza to simple things like yoga in the park and temporary pop-up installations, we want to have an open and conducive environment to satisfy a lot of different things going on at the same time,” says Nick Garzia, director of leasing for Hines, which has owned Atlantic Station for a little more than two years.

“We want the area to reflect the diversity of the shopper, of the buildings, of the different environment our center is in,” he says. “There will be an eclectic design. With the way retail is changing, we’re trying to get away from is the blandness of the center’s current design.”

The role technology plays in retail is growing, so it’s no surprise that hi-tech features are a fundamental part of a center’s landscape. Developers are also placing a high value on social media, noting its importance in boosting consumer interaction.

“Technology is more than just having an app with a list of your stores on it,” says Garzia. As part of the Central Park rehab at Atlantic Station, Hines will incorporate Google-powered artificial intelligence directories that will take consumer convenience to a whole new level.

“You can walk up to these directories and say, ‘I’m in the mood for pizza,’ and it will tell you who has pizza today,” says Garzia. “Or you can ask, ‘Does anyone have shoes on sale?’ and it will point you in the direction of those stores.”

In addition, the park area will include mobile phone charging stations as well as art installations throughout to make the space social media friendly.

“Having the right design at eye level that people can interact with becomes more important as retail is changing,” says Garcia.

Samuelson of Integral emphasizes that social media is important in creating an experience at a development. Like Atlantic Station, Assembly will feature artwork throughout.

“Art is a broad canvas of opportunity,” says Samuelson. “Everything from murals to sculptures, to pieces of temporary art and exhibit art. Contemporary, street-level art seems to be a draw and creates an opportunity for the community to really engage.”

Also included in the infrastructure of Assembly will be a fiber-optic network capable of delivering 50 gigabits per second, providing residents, tenants and retailers access to fast internet, high-definition television, digital voice service and Wi-Fi access throughout the community. In addition, the team is seeking to deliver the first autonomous vehicle shuttle on site that will deliver customers from Assembly to the Doraville MARTA station.

“At the tip of the sphere, we are one of the most connected sites in the Atlanta metro region,” says Samuelson. “We’re forward thinking in each of those regards to be part adaptive reuse, and part forward-looking to new technology.”