Land owned by one of Orange County’s pioneering farming families is set to be transformed into luxury mid-rise apartments, intensifying the urban-retail village that has taken root in what was once a vast landscape of lima bean fields and ranchland.

The twin six-story Symphony Apartments — linked by an elevated walkway and within walking distance of the city’s theater district — will be the latest addition to the dense mix of residential and retail developments fanning out from South Coast Plaza in Costa Mesa.

The corridors along the San Diego Freeway in Irvine and Costa Mesa have become increasingly residential as high-rise and mid-rise apartment buildings have shot up alongside top-end restaurants, banking districts and theater venues.

The latest complex, unanimously approved last week, will sit on land owned by the Sakioka family, known for its valuable real estate holdings and farmland nearby. The project will result in 393 high-end apartments on Anton Boulevard — about two blocks from South Coast Plaza and just a block from the Segerstrom Center for the Arts and South Coast Repertory.

The apartments represent a scaled-down version of an earlier project, Symphony Towers, that called for 484 condominiums stacked in two high-rise towers, one 26 stories tall and the other 16.

The towers were approved by the council in 2007 but as the bottom began falling out of the real estate market during the recession, they were never constructed.

The units will range from 750 square feet to 1,392 square feet and contain one or two bedrooms. Some will be 794-square-foot lofts.

Symphony Apartments will also contain about 4,000 square feet of retail space and more than $6 million worth of on-site amenities, including pools and spas, exercise rooms, clubhouses, a small dog park and open plazas.

The plans provide 731 parking spaces, more than called for in city parking requirements.

Among other council considerations is charging the developer a special fee for each apartment unit that would go toward city parks. Because the development contains apartments and is not ownership housing the fee is not required, but is up to the council’s discretion.

When it’s built, the Symphony Apartments will be one of several high-density developments in the immediate area. Nearby is 3400 Avenue of the Arts, a 770-unit complex, and the Enclave at South Coast, which has 890 units spread across 40 acres. Both lie in Cost Mesa city limits.

Paul Sanford, general manager of nearby Avenue of the Arts Wyndham Hotel, called the Symphony Apartments a “fantastic” project for a neighborhood that needs to continue becoming an urbanized, walkable area.

“They don’t want it to feel like downtown L.A. used to feel at 5 o’clock every night, when everyone used to leave,” Sanford said.

The Sakioka family said the plan is good for Costa Mesa.

Many who attended a City Council meeting this week on the project were complimentary of Sakioka, grandson of the late Roy Sakioka, a Japanese immigrant who made fortunes in Orange County real estate and farming.

The family still maintains a working farm nearby.

“It is no doubt in my mind that if George puts his name on something, it’s going to be top-flight,” said former councilman Jay Humphrey.

Humphrey expressed concern that as Costa Mesa’s population steadily rises because of new developments, there should be corresponding amounts of open space.

“We are steadily losing park space [for a] percentage of our population,” he said.

Among the concerns raised were affordable-housing options, which were not mandated for the Symphony Apartments.

“When are we going to have something to offset for our low-income [residents]?” resident Mary Spadoni asked. “Are these going to be $4,000, $5,000 a month? I wouldn’t be able to live there.” 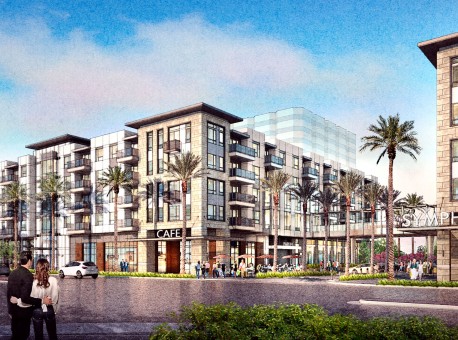