The E.R.B. – No Commute Required 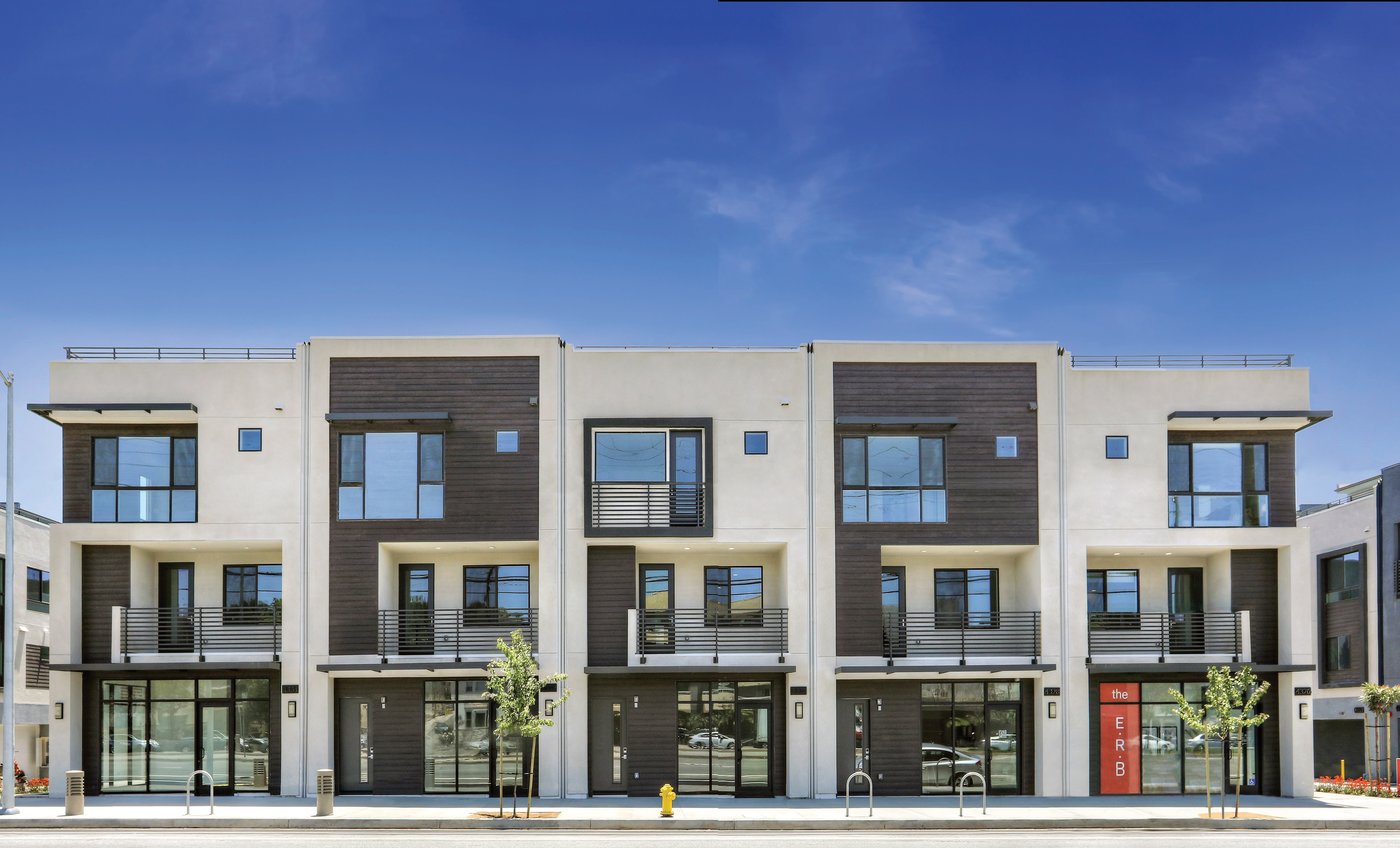 NORTHEAST OF DOWNTOWN LOS ANGELES’ bustle is Eagle Rock, an eclectic urban pocket lauded for its vibrant local culture and lack of national retail storefronts. The ethnically diverse district has gained status as a burgeoning destination for young urbanites.

The unique character of the neighborhood was top of mind for developer Warmington Residential and KTGY Architecture + Planning as they helmed this mixed-use small lot development. The firms, which had worked together on nearby projects, adopted a localized approach to design a series of buildings that would blend with the area’s community vibe. They also came up with an innovative way to address the live/work housing trend, which is much needed in a city that often tops lists of the country’s worst rush-hour traffic.

Named for its Eagle Rock Boulevard location, The ERB clusters 45 detached single-family houses on a tight lot that was zoned to require commercial frontage. Seven of the homes are fronted by shopkeeper units, each offering approximately 470 square feet of retail or office space below two floors of living space.

Taking the ordinance a step further, the shopkeeper units introduce a new mixed-use typology to small lot developments: They are regulated to be leased only to the tenants that occupy the home above it in order to prioritize local businesses. The design team configured the remaining homes with ground-floor spaces that serve as home offices, an attractive feature to the growing number of entrepreneurial millennials and Gen Xers in the area who prefer to work from home or are self-employed. To ensure that the development maintains a local flavor, the team brought in interior designers and furniture purveyors Chateau Interiors and Matters of Space, both with offices nearby. The project’s HOA board approves prospective tenants for the retail spaces, although buyers are given full creative freedom of how they wish to design the units.

“Adding the storefront element tightens the community aspect,” says Rebecca Anbardan, vice president of marketing and sales at Warmington Residential’s Southern California division, who helped drive the development’s design and objectives. “It’s unique to be within an urban environment that’s also within its own individual community and own sense of neighborhood.” 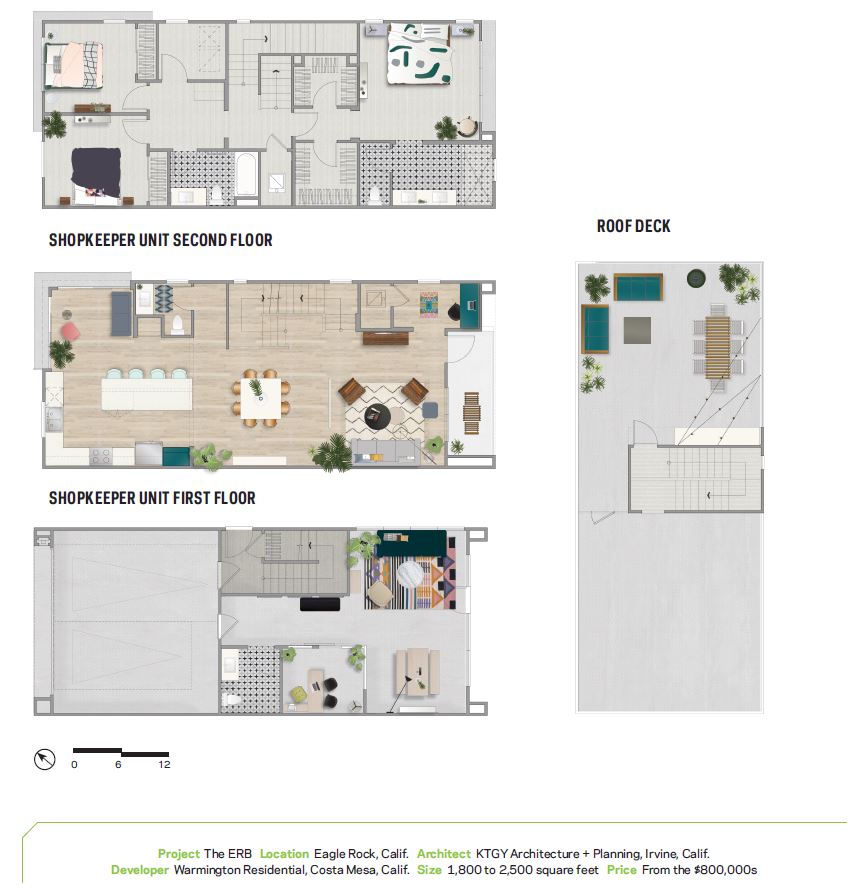 Outfitted in the contemporary aesthetic favored by the project’s target demographic, the interiors are designed as a minimalist canvas that spotlight the units’ more eye-catching features, such as colorful backsplashes, open-shelved cabinetry, and the buyer’s personal furniture and décor selections. Oversized picture windows stream natural daylight to make the homes feel light and spacious while open floor plans allow the buyers flexibility with each room’s function.

Interiors are fitted with simple materials such as wood paneling to warm the cool color palette and soften the more modern elements such as perforated metal awnings and extensive glazing. Each unit includes a small “tech station” with a built-in desk and USB hookups, and buyers have the option of expanding the workspace to an adjacent bonus room. 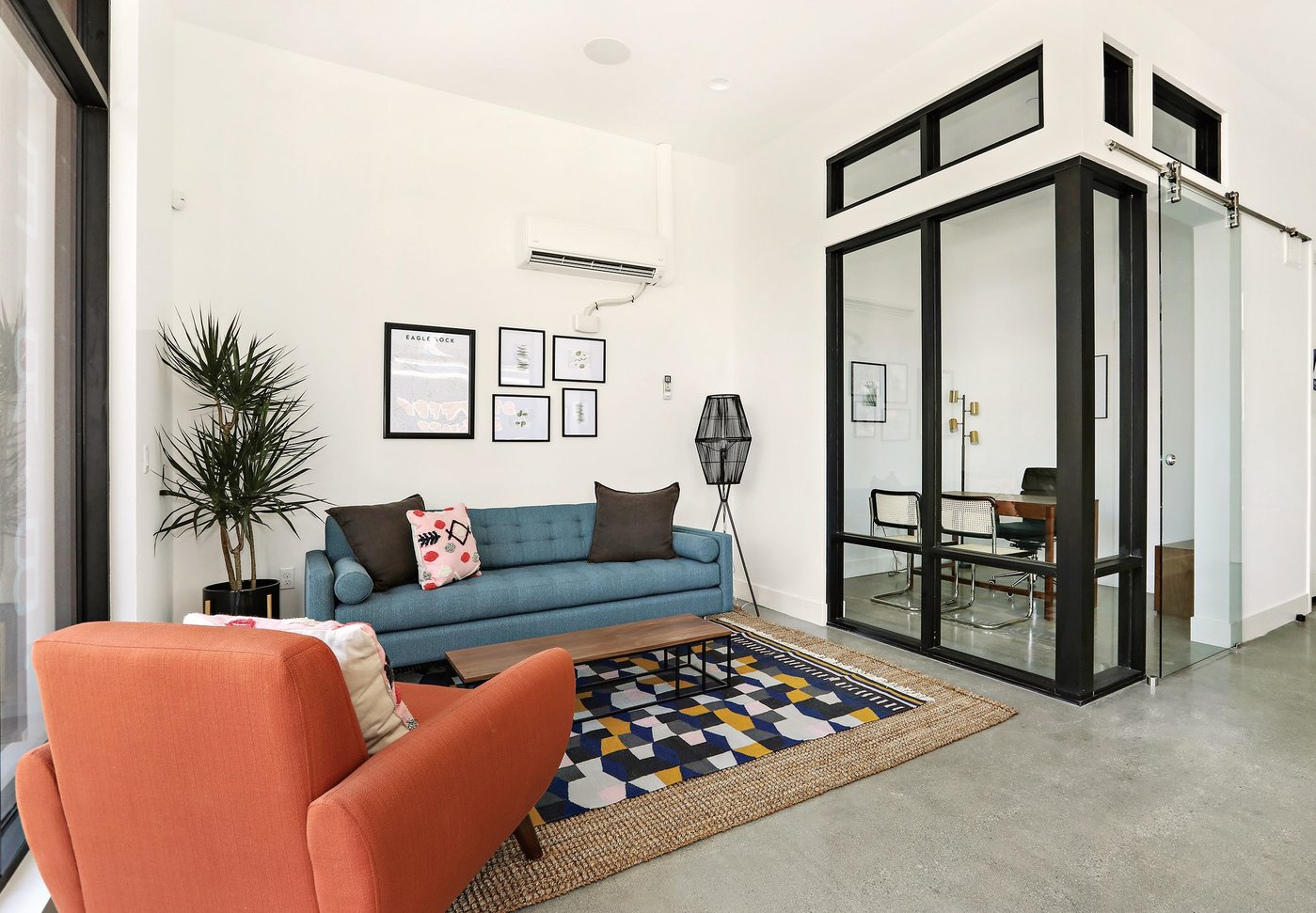 Each residence has a private rooftop deck—a prime amenity in urban, high-density environments. They offer space for year-round entertaining in the region’s temperate climate and provide vistas of the San Gabriel Mountains and city lights. The architects also added small balconies off the kitchen, making it possible to enjoy the outdoors without going upstairs.

”We found that when we optioned roof decks in similar projects nearby, buyers were taking that option every time,” says Alan Scales, principal at KTGY Architecture + Planning. So the team opted to build in the decks as a standard feature at the ERB. Scales—whose firm has developed several small lot projects in Los Angeles—serves on the city’s architectural advisory board that is updating and amending the relatively new small lot ordinance and using the ERB as a pilot for the new commercial element. While the ordinance limits lot size approximately 1,300 square feet, the ERB design team didn’t view the small site as a hindrance, but rather a challenge to configuring a livable layout in an efficient footprint.

“The back-and-forth struggle is part of the downfall of being first, but it’s more largely a benefit because you get to be a part of the solution,” says Anbardan.

They were able to pack a lot of living space into the project’s two- and three-level plus rooftop deck floor plans, which each contain three or four bedrooms, two-and-a-half bathrooms, and up to 2,500 square feet of living space in addition to two-car garages. By pacing the build-out over 180 days, Warmington was able to offer buyers the ability to customize their homes—a bonus that’s nearly unheard of in the Los Angeles market, where most units in a new development are built out all at once. Chateau Interiors, which currently holds one of the development’s storefront spaces, worked with buyers to select from a variety of countertops, cabinets, plumbing fixtures, flooring, appliances, window coverings, and paints.

”True live/work is something there is a significant need for.”
– REBECCA ANBARDAN, Warmington Residential

All of the units also include a home automation kit operated through the Nexia system hub that include Schlage keyless entry locksets, smart garage doors, an outdoor surveillance camera, a lighting module, and a smart thermostat. “We provide them with the main components,” says Anbardan. “After escrow, they can choose to add several other features that suit their lifestyle and preferences.”

Although some of the homes are still reaching completion, more than 60% of the units have already been sold. Two of the seven storefronts have been filled by a specialty tea and coffee shop and a hair studio. According to Anbardan, residents are already enjoying the neighborhood’s unique character each evening when the boulevard, home to two of the city’s most popular food trucks, comes to life with nighttime activity. 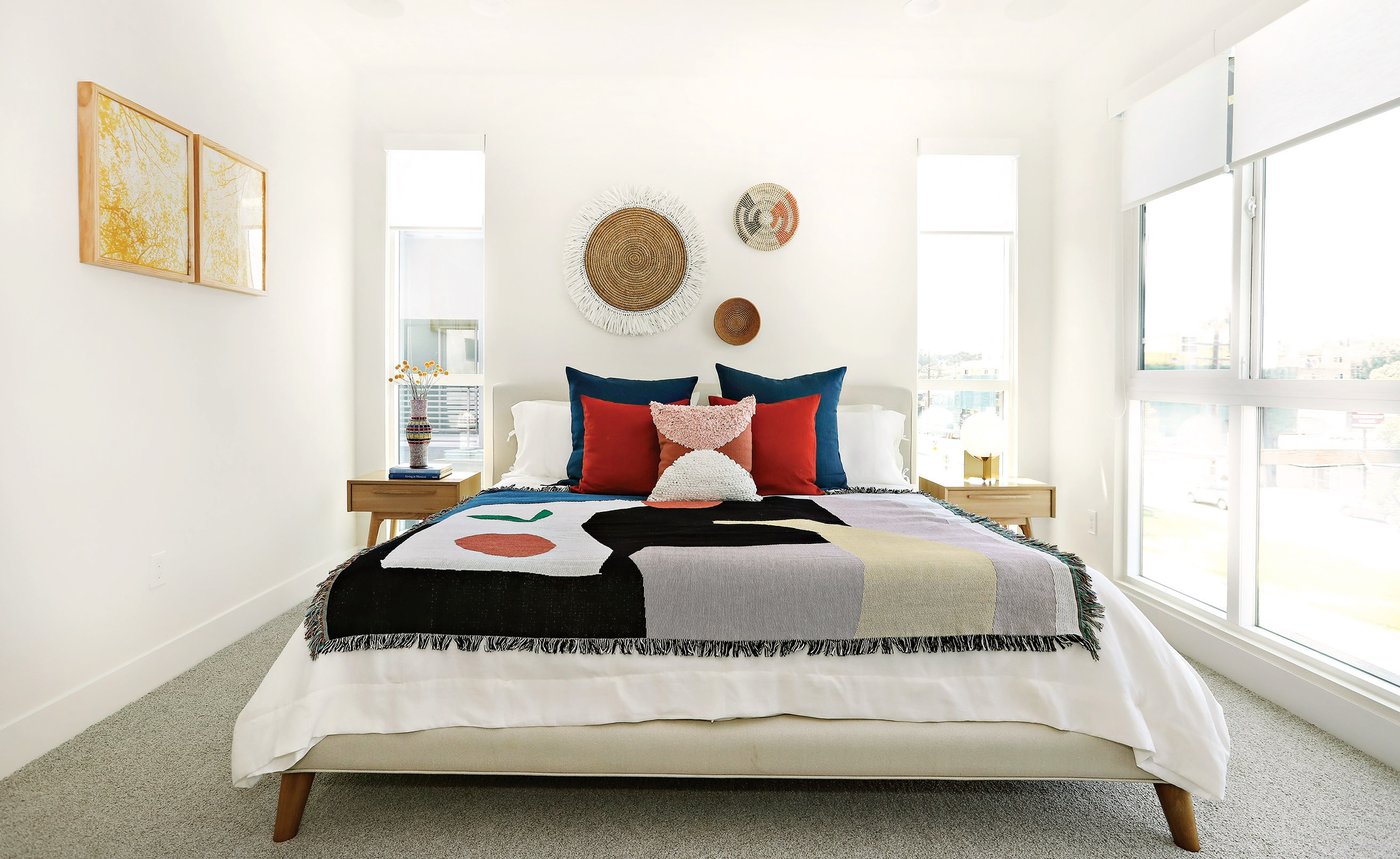 The team hopes the project will prompt future development in Eagle Rock and its surrounding neighborhoods. “True live/work is something there is a significant need for,” says Anbardan. “Especially in communities like Eagle Rock. It’s important to us to make sure we’re fitting into local neighborhoods rather than recreating our own.” 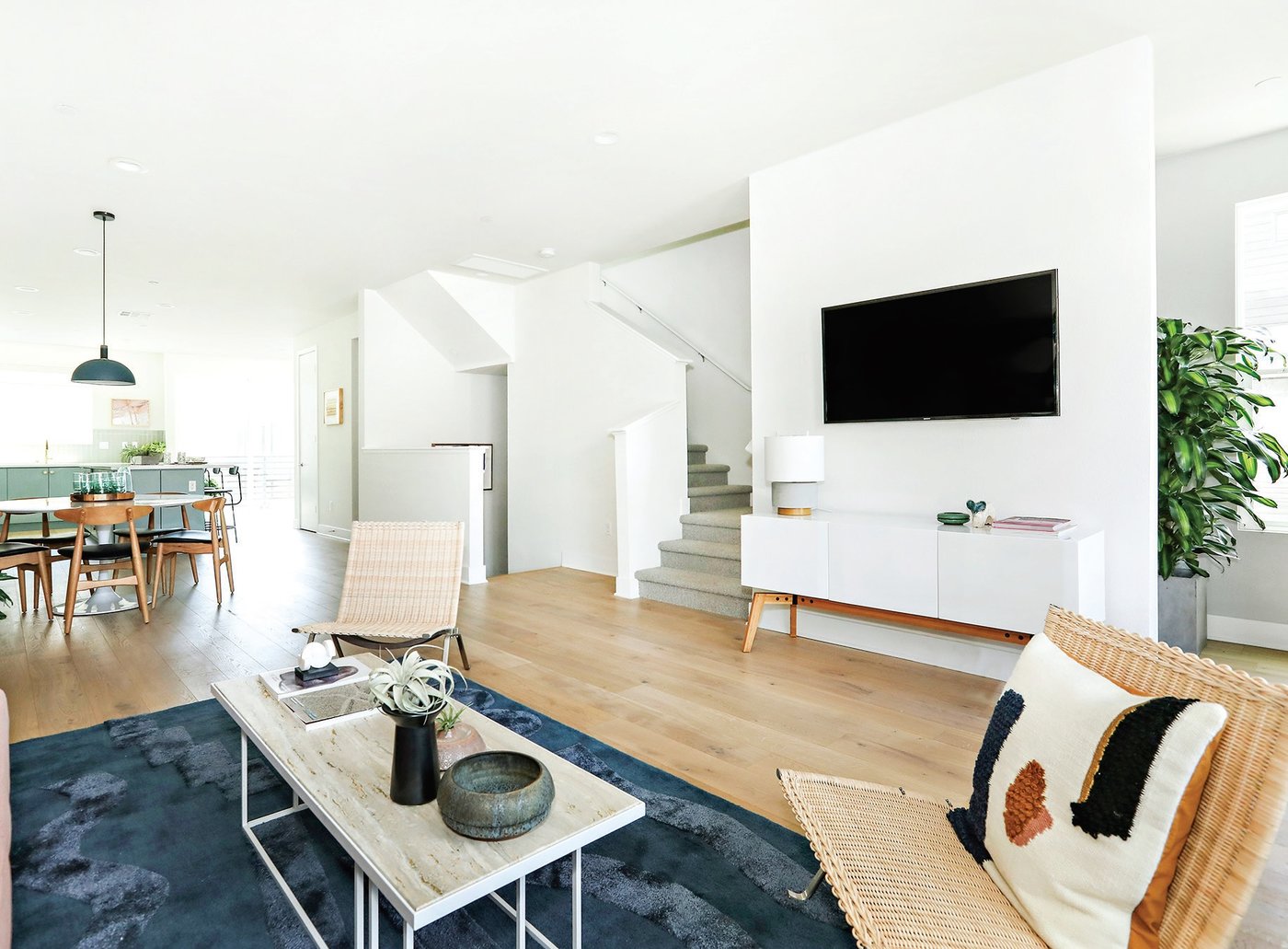 Local Business Ground-level shopkeeper units with attached retail space give new meaning to the concept of working from home. 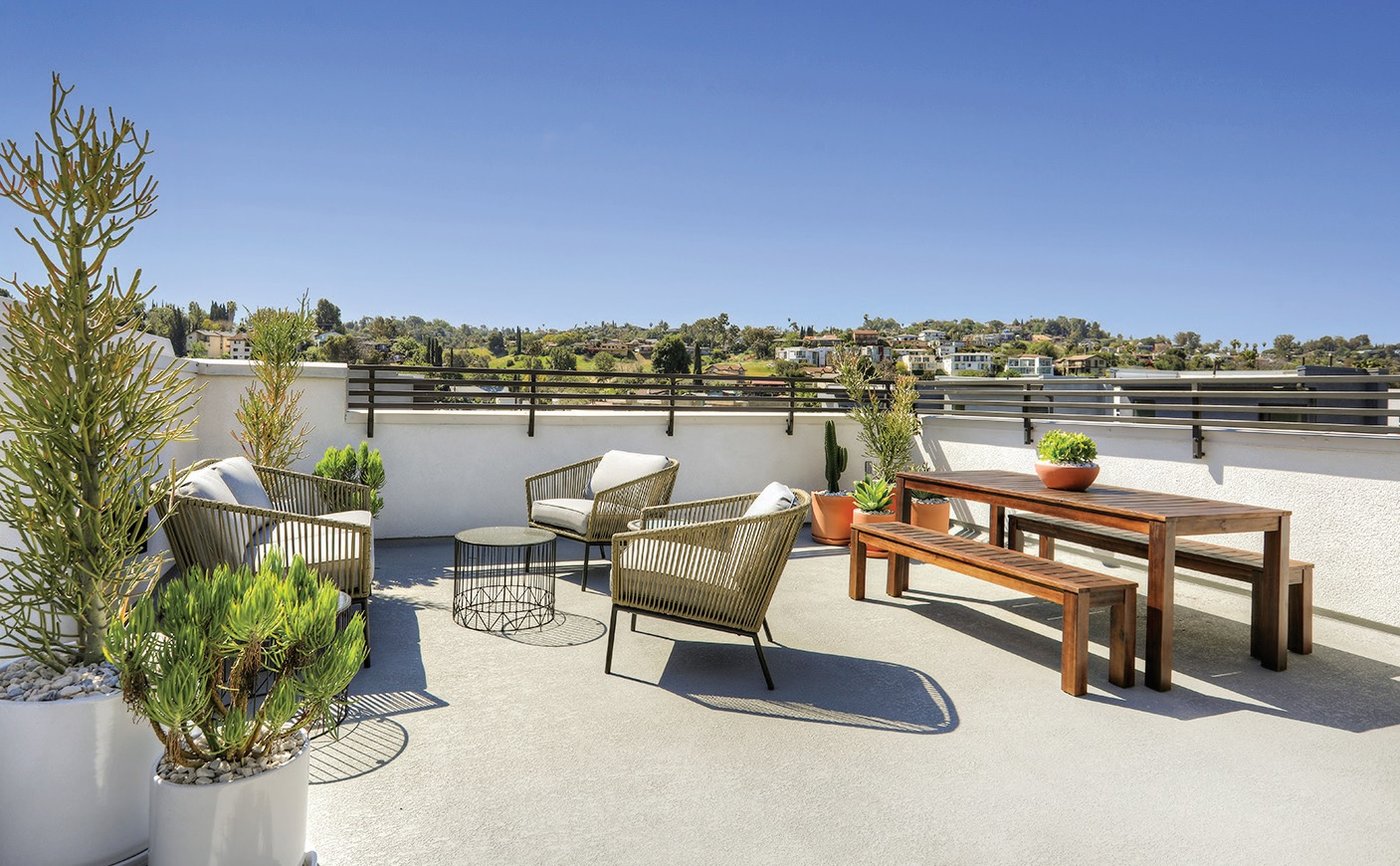