A housing project mixing hundreds of luxury apartments and dozens of shops in West Covina could dramatically alter a blighted Glendora Avenue neighborhood and create the downtown district West Covina lacks, but it could cost the city its image as a bedroom community.

The construction is both sad and exciting, said Former Mayor Forrest Tennant, who owns the Historical Society of West Covina museum that now faces the behemoth. The city must become more dense, but that means stepping away from the idyllic single-family homes the city’s known for, he said.

“A lot of us didn’t want to see West Covina grow upward, we didn’t want to see a lot of apartments and condominiums come in,” he said. “There are a whole lot of things I’d rather see there then what is going to be there, but it’s not in the cards for what our town is and where we’re located.”

The Lakes at West Covina, being built by Lennar Corp., will feature 450 apartment units — one and two bedrooms — and some 20,000 square feet of retail space on the site of the former Wicks Furniture at 301 S. Glendora Ave. The developers plans to have bocce ball and basketball courts; a turf soccer field; a fitness room; a public work space; and a resort-style pool with fire pits and cabanas.

The company is not releasing how much rent will cost. Construction started in March and a half-built parking garage loomed behind city officials as they posed with golden shovels during a ground-breaking ceremony Thursday.

Though it’ll change West Covina forever, Tennant said project from Lennar Multifamily Communities is the best way to create a downtown. He called it the “most historical development” since the 1950s. It’ll force the dated neighborhood — and city — to adapt, for the better, he said.

He recently formed a citizens group to push for upgrades along the stretch across from the developments.

“We want to come up with a plan to frankly bring the whole area up to the standards that Lennar is going bring to us,” he said. “They’re going to raise the bar of decor and niceness, and if we do it right, we’ll end up with a lovely downtown area.”

Nearby business owners varied on the block-wide development under construction now, some were excited for new customers while others feared competition and higher rent from gentrification.

“Let’s hope that it helps everybody,” said Donna Carrillo, whose cake shop opened 29 years ago. “Hopefully they’ll utilize the businesses that are already here, but we’ll have to wait and see.”

Lennar bought the 6 1/2 acre lot from the Charles Company in 2013, though that company planned a similar project years before that drew backlash from residents who said the density could forever change the community often associated with single-family homes.

The Lakes project is the largest the company is working on in California with its second largest — in Downtown L.A. — at less than half the size.

“We think it’s going to be a very important catalyst for the revitalization of old downtown West Covina,” said Scott Raynders, Vice President of California Development for Lennar. “We’ve seen successful projects like this in other cities, like Monrovia or Pasadena.”

The area seems an odd choice for luxury apartments. The blighted neighborhood has broken shop windows, graffiti and vacant store fronts. The biggest eyesore is the burned up shell of the former Great Wall restaurant. Businesses complain that vagrants defecate in the shrubbery and lurk at all hours. Cardboard blocked house windows and junk cars sat idly in driveways a block away, where no sidewalks exist. A health clinic within viewing range of the future luxury apartments helps the uninsured get medical care.

Mario Moreno, an employee at Katrina Designs on Glendora Avenue, said businesses struggle to stay open and that transients break windows and take up residence in abandoned stores. As he talked, a crew boarded up one such store behind him.

“It’s going to take time, but it’s going to be good,” he said, looking at the construction across the street. “It can’t be worse than it is.”

The region lacks rental housing, he said. With home ownership on the decline, it’s crucial for growth. If The Lakes is successful, the strip mall across the street will increase in value, which could mean higher rent for existing tenants. But, the new potential customers may also give businesses a chance to grow.

“It’s an opportunity for those businesses to become more prosperous, but they have to adjust their strategy to capture this new market. If they do, they should benefit,” Willson said. 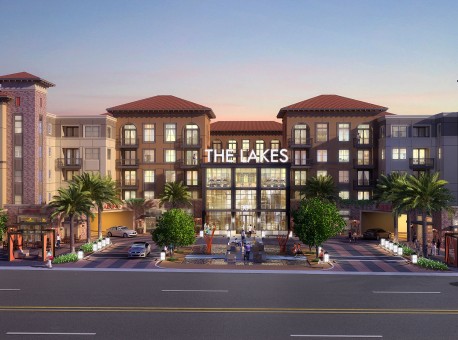