The Met at Boulevard One: Emblematic of Lowry’s Evolution 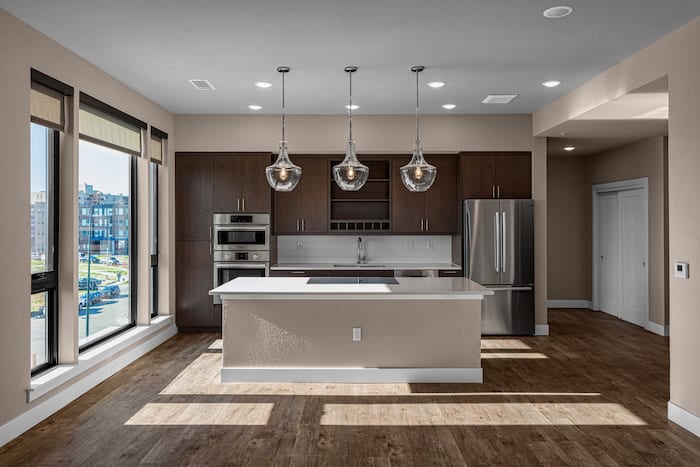 At the former Lowry Air Force Base on the eastern fringe of Denver, flight operations ceased in 1965, long before the base officially closed in 1994.

A half-century after the last training flight took off here, the end of Runway One relaunched as Boulevard One. The 70-acre, mixed-use development represents the final phase of the planned build-out at Lowry, with more than 100 single-family homes, 250 attached homes, 420 apartments and 100 condominiums, including the new Met at Boulevard One.

The new 90-unit condominium project emblematic of the evolution of Lowry, says Nathan Sciarra, principal at KTGY Architecture + Planning in Denver and one of the architects on the project. “I think there’s an urban sense in Boulevard One you won’t find much in the rest of Lowry, and I think it’s a great way to cap off what we’ve seen develop throughout the years,” he says. “There’s a good mixed-use component to what Boulevard One is doing. You’ve got higher-density rental units as well as the condos, townhomes, and houses. It’s just a good blend of activity.”

Sciarra says residential and commercial were traditionally bifurcated in Lowry prior to Boulevard One. “It’s more of an urban-design, modern-day, Main Street-type of feel that you have at Boulevard One,” he says.

The vision for the Met at Boulevard one took root in 2017 with “significant competition” between developers for the site, says Sciarra. Metropolitan Homes won out, and brought KTGY on based on previous experience with the firm. Ground broke in winter 2019.

Peter Kudla, CEO of Metropolitan Homes in Denver, says KTGY was chosen based on a previous collaboration on the Amberley Heights apartment complex at Vallagio in Englewood. “They did a fabulous job reconfiguring the 45 units [at the Met at Boulevard One],” says Kudla. “They were very familiar with our demographics, they had a great relationship with our internal design team and construction team, and the attention to detail was very well-executed.”

Not that there weren’t any hiccups. “I think that the coordination between engineering is always tricky,” notes Kudla. “K2 and KTGY worked together very well to focus in on those particular needs.”

“Knowing that it’s for-sale product, we paid attention to the details and the detailing, waterproofing, and sound assemblies between doors,” says Greg Krause, principal and co-founder (with Kudla) of K2. “The team did a good job with coordination between everybody.”

Kudla likewise commends Deborah Green, a senior adviser with Metropolitan Residential Advisors, for her work on the project. “Deborah worked diligently on interior design, floor plan design, use of space,” he says.

It all comes back to lifestyle, adds Krause. “It’s not an age-restricted community by any means, but the product design is pretty age-targeted. It’s about location. There’s not a lot of amenities in the building. The amenity is the location, the open space, the landscape, the art around the building.” There are no clubhouses, workout rooms or pools.

Another balancing act involved price. “One of the big goals of Metropolitan Homes in conjunction with what Lowry was looking for here was really trying to come up with a price-sensitive, for-sale delivery in the master plan of Boulevard One,” says Sciarra.

Condos range from $450,000s to $875,000. Sciarra says it’s a good value. “It’s at the lower end for the neighborhood,” he says. “The kitchens are still grand and luxurious. The bathrooms are like a very well-done, high-end home. I think the key is that there weren’t any corners cut on how things got finished. It really was about how we were efficient with the spaces so we were able to reduce the square footage and create an achievable price point.”

The target market is an older demographic with “an empty-nester mindset,” he adds, and that played into the design. “There are two buildings that flank on either side, each with about 50 units, and relatively small unit sizes in general”, ranging from 1,000 to 1,850 square feet, explains Sciarra. “The buildings themselves are three stories with below-grade parking.”

Sciarra calls the architectural style “modern prairie,” noting, “a lot of masonry and a lot of horizontal lines, really trying to be linear in nature. The brick is very Frank Lloyd Wright-esque in terms of the detailing, its color palette, things of that nature. There is a lot of intricate brick detailing within the design, and that was really to create a richness and a character to the overall building that screamed, ‘for sale.’”

It’s not just about what’s inside; what’s outside is another big selling point. “There’s a pretty significant amount of parklike space behind each of the buildings off of the main street there, Lowry Boulevard,” says Sciarra. “It’s got grand walkways along the street set apart with planters, really trying to create a great community along the street front.”

With the work at Vallagio, KTGY understood the approach. “We had a longstanding working relationship with [Metropolitan Homes], and knew how they worked, what their process was,” says Sciarra. “Peter is very involved, very into all the details. He knows what he wants.”

As general contractor K2 Residential Solutions is a sister company to Metropolitan Homes, Sciarra says construction and design were integrated from the outset. “They [K2] were at the table from Day One, before we were even engaged, so having that input and that guidance throughout the process makes it from a design perspective much easier,” he notes. “We know what we’re getting into, what the decisions we’re making are, how they impact the overall cost … Construction was relatively smooth.”

The biggest hurdle was up front, he adds. “The Lowry design review process is a very arduous process. There are committees that are very involved and into the designs of the projects, down to the brick detailing and what the building looks like to the berming of the landscape to the specific species of plant … Being able to adapt to the constant change and comment and feedback to get through that process was the biggest challenge.”

Boulevard One is the last new neighborhood for Lowry. Kudla says the base’s redevelopment “is everything I expected,” noting that Metropolitan’s first project at Lowry was almost 20 years ago.

He says he sees “if I had to put my forecast hat on, the ground that the state of Colorado controls in the vicinity of Lowry Boulevard and Havana [Street] will be the upcoming future for that part of Denver.”