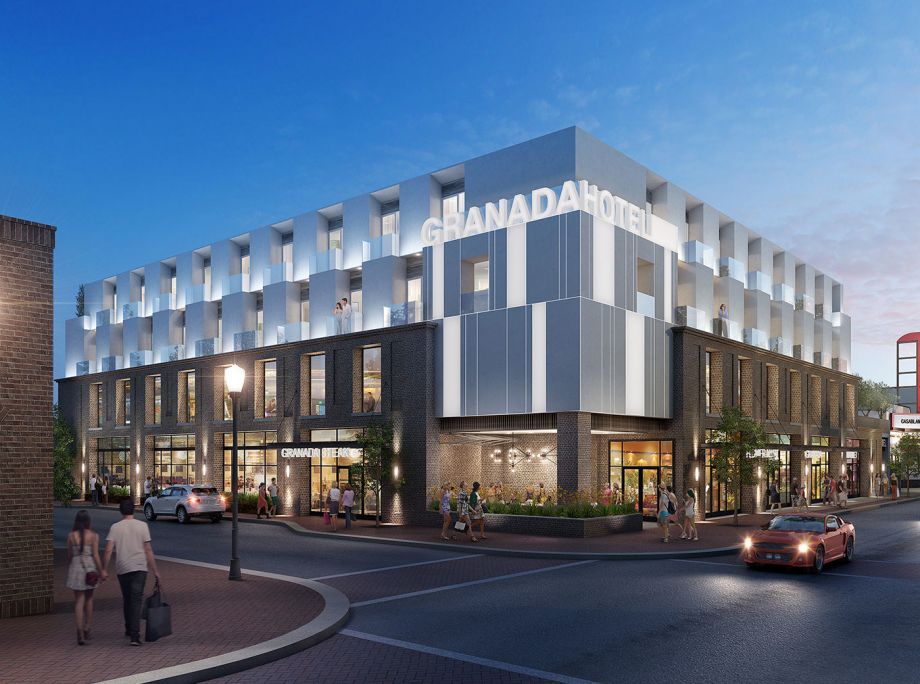 The long-awaited new development responds to the city’s long-time goal to revitalize this southern Silicon Valley downtown neighborhood with hotel use and boost tourism.

LOS ANGELES (May 20, 2019) – International award-winning firm KTGY Architecture + Planning is pleased to announce that the Granada Hotel & Spa, a new four-story, contemporary-style boutique hotel with 60 guest rooms situated in the heart of downtown Morgan Hill, Calif., has broken ground. Granada Hotel & Spa would be the first hotel to open in the downtown neighborhood.

“The architectural design thoughtfully marries traditional with modern and incorporates vintage brick veneer, wood, steel, and other materials that reference the local palate and setting,” said Sean Martino, director in KTGY’s Los Angeles office. “A special design element is the Krion façade system with translucent panels and integrated lighting, which will create a dynamic façade at the corner of Monterey Road and East 1st Street.”

“The full-service hotel will be a beautiful venue for ‘destination weddings’ and events with amenities that appeal to sophisticated tastes,” Martino noted. “There are many indoor and outdoor flex spaces that can accommodate small to large parties including a turf lawn on the ground floor. The restaurant offers a private dining area with a glass wall that views the glass flower coolers. In addition, there is a glass walk-in wine cooler with views from the main space and private dining area.”

A large kitchen on the ground level will serve the restaurant, wine bar and market area, which will be open to the public as well as hotel guests. On the second level, there is a catering kitchen to serve the events held in the banquet hall on that floor. The resort-style pool and deck are also located on the second level. The guest rooms (30 keys per floor) and suites are located on the third and fourth floors. There are also outdoor living room and lounge areas on the third and fourth floors for guests to relax and socialize. A rooftop garden will be used to grow organic vegetables for the restaurant and market hall.

Granada Hotel’s owner, Frank Léal of Leal Vineyards in Hollister, recently renovated the neighboring Granada Theater. Léal is also the owner of Sycamore Creek Vineyards and Willow Heights Mansion, both in Morgan Hill, which are all popular wedding destinations and event facilities.

“The long-awaited new development responds to the city’s long-time goal to revitalize this southern Silicon Valley downtown neighborhood with hotel use and boost tourism so we are excited to see it finally move forward,” said Martino. “We expect that the Granada Hotel & Spa will fuel the addition of more restaurants and entertainment venues in the area, which is known for its prominent dining, entertainment and recreational destination.”

Martino continues, “Frank Léal is a successful entrepreneur and winemaker. Granada Hotel will offer ‘the ultimate Léal experience of great food, wine, entertainment and luxurious accommodations. The Granada Hotel and the adjacent theater will reinvigorate downtown Morgan Hill and will create a new anchor to the ‘Main Street retail area’ attracting both local residents and tourism.” The new hotel is located at 17490 Monterey Road and is slated to open in the summer of 2021.