Israeli-Canadian architect Moshe Safdie’s first built project, Habitat 67, was an attempt to bring some of the advantages of suburban living—natural ventilation, openness, privacy, and gardens—to higher-density housing. Built for the 1967 World’s Fair in Montreal, the artfully stacked 158-unit development was also an early experiment with using prefabricated modular construction in the hope of making the housing more affordable. Nearly 50 years later, architects and developers are still exploring ways to rethink higher-density housing.

Ron Nyren is a freelance architecture, urban design, and real estate writer based in the San Francisco Bay area. (Iwan Baan)
Local architect Barbara Bestor calls her approach to designing Blackbirds “stealth density.” In 2005, Los Angeles amended its municipal code with the Small Lot Ordinance, allowing for the subdivision of lots within existing multifamily and commercial zones so that developers could create detached townhouses without the need for a homeowners association. On a 0.82-acre (0.33 ha) site in the Echo Park neighborhood just northwest of downtown, local developer LocalConstruct took advantage of the ordinance to replace five dilapidated single-family residences with 18 new houses.

Bestor Architecture grouped the two- and three-story dwellings, each measuring less than 1,920 square feet (178 sq m), into a total of nine volumes to conceal their actual density. Most of the volumes also have pitched roofs, blending in with the surrounding single-family houses. The units are placed around a pedestrian-friendly street, which provides room to park cars and doubles as a plaza for residents; a few units have enclosed garages. Close to public transit lines, Blackbirds was completed in 2015. Creating parks is not the only way to restore nature to the urban realm. In Milan, Bosco Verticale—Italian for “vertical forest”—consists of two residential condominium towers, 19 and 27 stories tall, that incorporate trees, shrubs, and other plants from top to bottom. Part of the mixed-use redevelopment of the Porta Nuova business district, the towers house 113 apartments and add the equivalent of 215,280 square feet (20,000 sq m) of forest and undergrowth to the urban core: two trees for every resident in the complex. The vegetation filters sunlight, serves as a habitat for birds and butterflies, and helps clean the air.

Local firm Stefano Boeri Architetti informed his design by studying other architects’ attempts to add greenery to the upper levels of high rises. Boeri’s staggered concrete balconies, which extend from the towers’ facades, contain trees strongly anchored to remain secure in high winds. A rooftop crane on each tower allows building staff to care for trees from the exterior. Three levels of parking are tucked underground to leave room for an extensive pedestrian- and bicycle-friendly open space at the ground level. The towers were completed in 2014 for Hines Italia of Milan. 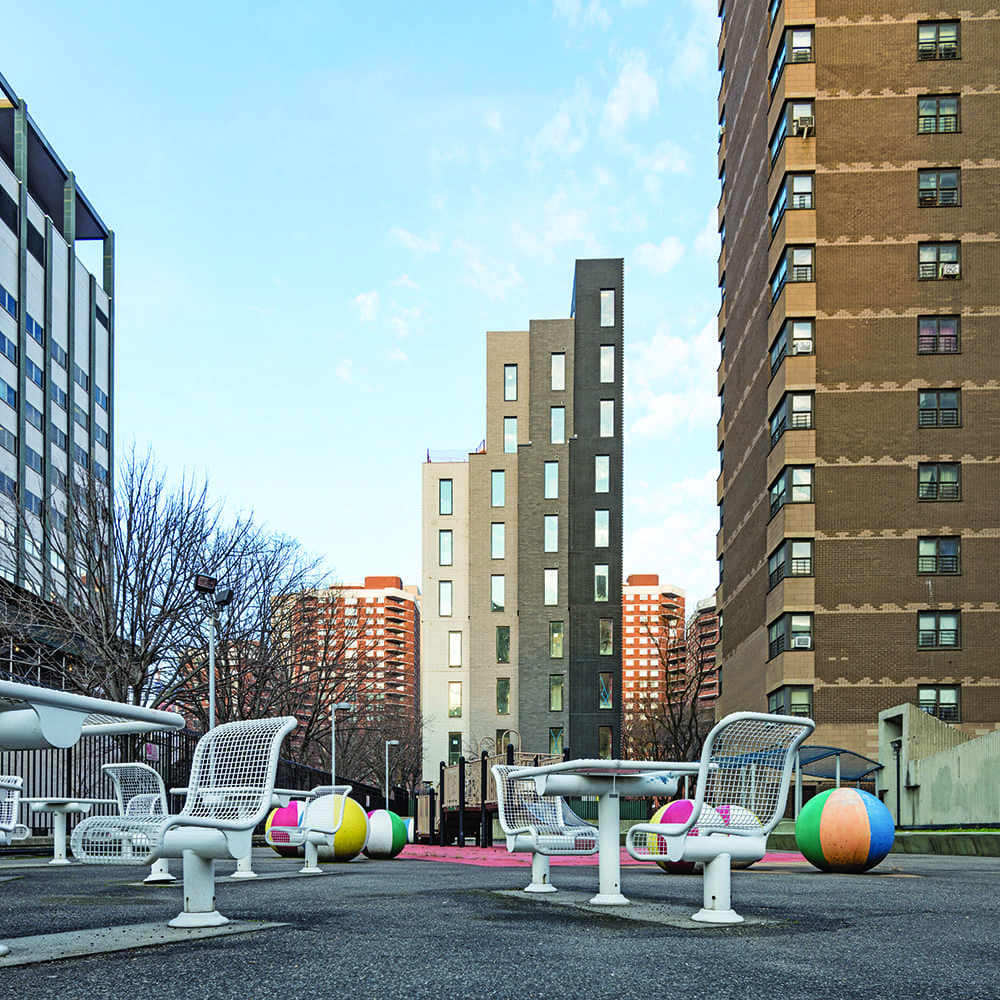 In 1987, New York City revised its zoning rules to prohibit construction of units less than 400 square feet (37 sq m) in size. In the decades since, the city’s demographic makeup has changed, with one- and two-person households making up 60 percent of the city’s population. In 2012, the city decided to experiment with ways to address the housing shortage for singles and couples, asking developers for proposals to create a micro-unit apartment building on city-owned land. The city waived the 400-square-foot limit for the site.

Monadnock Development and nARCHITECTS, both of Brooklyn, won the competition with their design for Carmel Place, which consists of 55 units ranging from 260 to 360 square feet (24 to 33 sq m) over ground-floor retail space. The development relied on modular construction to shorten the construction process. Completed in 2016, the building consists of four slim volumes. To make the most of the small space, units have shallow “Juliet” balconies, high ceilings, and fold-down furniture. Forty percent of the apartments will be affordable to people with a range of incomes, from very low-income to middle-income households. 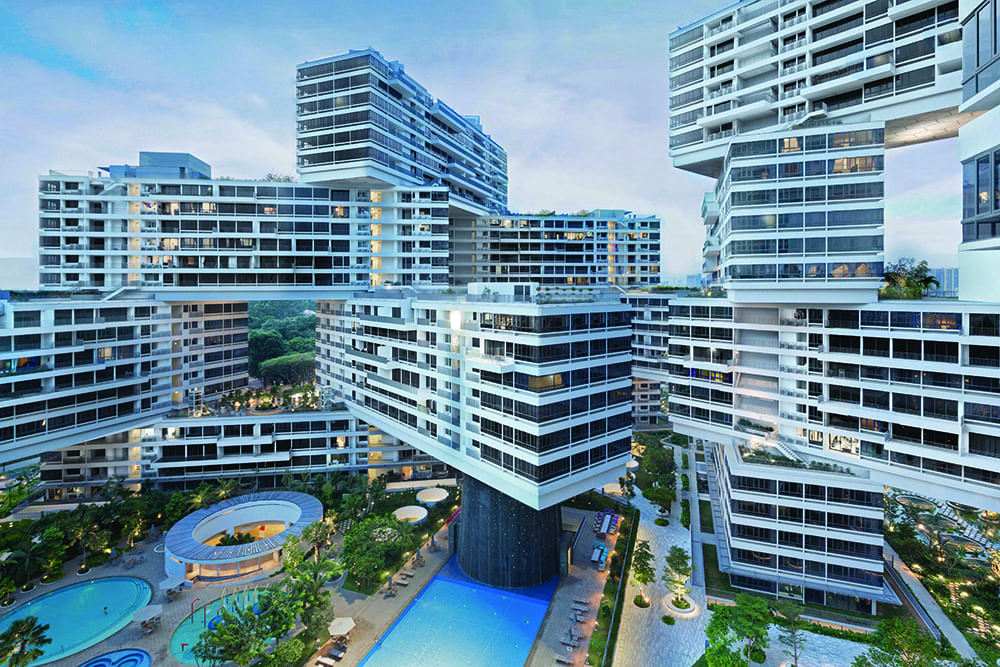 The Interlace turns the conventional residential tower development on its head—or, more accurately, on its side. Rather than design a group of disconnected tall buildings, OMA/Ole Scheeren of Beijing, working with local firm RSP Architects, Planners, and Engineers, stacked 31 six-story blocks at angles to each other in an interlocking arrangement, creating a “vertical village.” Interwoven with eight large, open courtyards, the buildings offer a range of shared and private landscaped outdoor spaces at different levels, intended to promote interaction among residents. Amenities include barbecue areas, gyms, swimming pools, tennis courts, and a running track around the perimeter.

The open, stacked arrangement channels prevailing winds, which pass through the individual structures and over water features, helping mitigate Singapore’s high temperatures. The blocks also provide shade for additional cooling. The 1,040 condominium units, which include two-, three-, and four-bedroom units, were completed in 2013 for CapitaLand Singapore. Adjacent to the Tate Modern art gallery in London’s South Bank area, NEO Bankside’s four hexagonal towers are grouped on the eastern side of the site, leaving room for much-needed green space in the dense neighborhood. Two public pathways lead from the Tate’s riverside garden through NEO Bankside’s extensive landscaping to the street. The gardens include groves, bat and sparrow boxes, beehives, an herb garden, and fruit trees. Residents have private gardens separated from the public spaces with planted berms, moats, and walkways.

The towers themselves, ranging from 12 to 24 stories and containing a total of 217 apartments, have a visually distinctive exterior bracing system that eliminated the need for load-bearing walls inside the units, allowing for flexible use of interior space. On the north and south sides of each building, winter gardens extend living space. Designed by Rogers Stirk Harbour + Partners and John Robertson Architects for Native Land Limited—all local—NEO Bankside was completed in 2012. The Southern California Institute of Architecture (SCI-arc) in Los Angeles’s Arts District occupies a former freight depot a quarter-mile (0.4 km) long, paralleling the long lines of train tracks and the Los Angeles River nearby. In between SCI-arc and the tracks, on land once dedicated to railcar maintenance yards, local firms Michael Maltzan Architecture and KTGY Architecture + Planning created a residential homage to the city’s linearity with a mixed-use building more than a quarter-mile in length, adding density without disrupting the low-rise context.

The six-story building includes ground-floor commercial spaces and 438 dwellings ranging from studios to two-bedroom apartments and townhouses; 20 percent of units are set aside as affordable housing. The ground floor contains shops, restaurants, a grocery store, and space for a future arts center. Close to a planned Metro station, the building was completed in 2015 for a joint venture between local companies One Santa Fe PMC and Canyon Capital Realty Advisors. Half a century after Moshe Safdie’s Habitat 67 model housing community opened during the World’s Fair in Montreal, CapitaLand invited the architect to revisit those ideas for making density more livable in the Singaporean suburb of Bishan and create an alternative to the standard high rise. Designed by the local office of Safdie Architects with local firm DCA Architects, Sky Habitat consists of two 38-story condominium towers connected by three “sky garden” bridges that support streets, gardens, and terraces.

More than 70 percent of the 130,000-square-foot (12,000 sq m) site is given over to gardens, along with outdoor event areas, ponds, swimming pools, a barbecue area, walking paths, and tennis courts. The towers step down at an angle to give each unit sunlight and views. Each of the 509 units has its own terrace or balcony and can take advantage of cross-ventilation. Completed in 2015, the complex is a short walk from a Mass Rapid Transit (MRT) station and a bus interchange. Singapore’s public housing authority, the Housing and Development Board, is replacing its aging low-rise Dawson Estate, close to the city-state’s central business district. The effort is intended to add commercial space, community amenities, and 8,500 residential units by 2020. One of the first completed residential villages is the 758-unit SkyTerrace @ Dawson, which consists of five 40- to 43-story residential towers and a four-story parking podium.

Multiple landscaped sky bridges connect the towers. Extensive landscaped terraces and roof gardens bring nature close to residents and visually link the towers to the nearby linear park. To encourage multigenerational living, units are designed so that studio apartments can be paired with large duplexes, enabling families to live side by side with aging parents. Operable windows facilitate natural ventilation. SkyTerrace was designed by local firm SCDA Architects and completed in 2015. 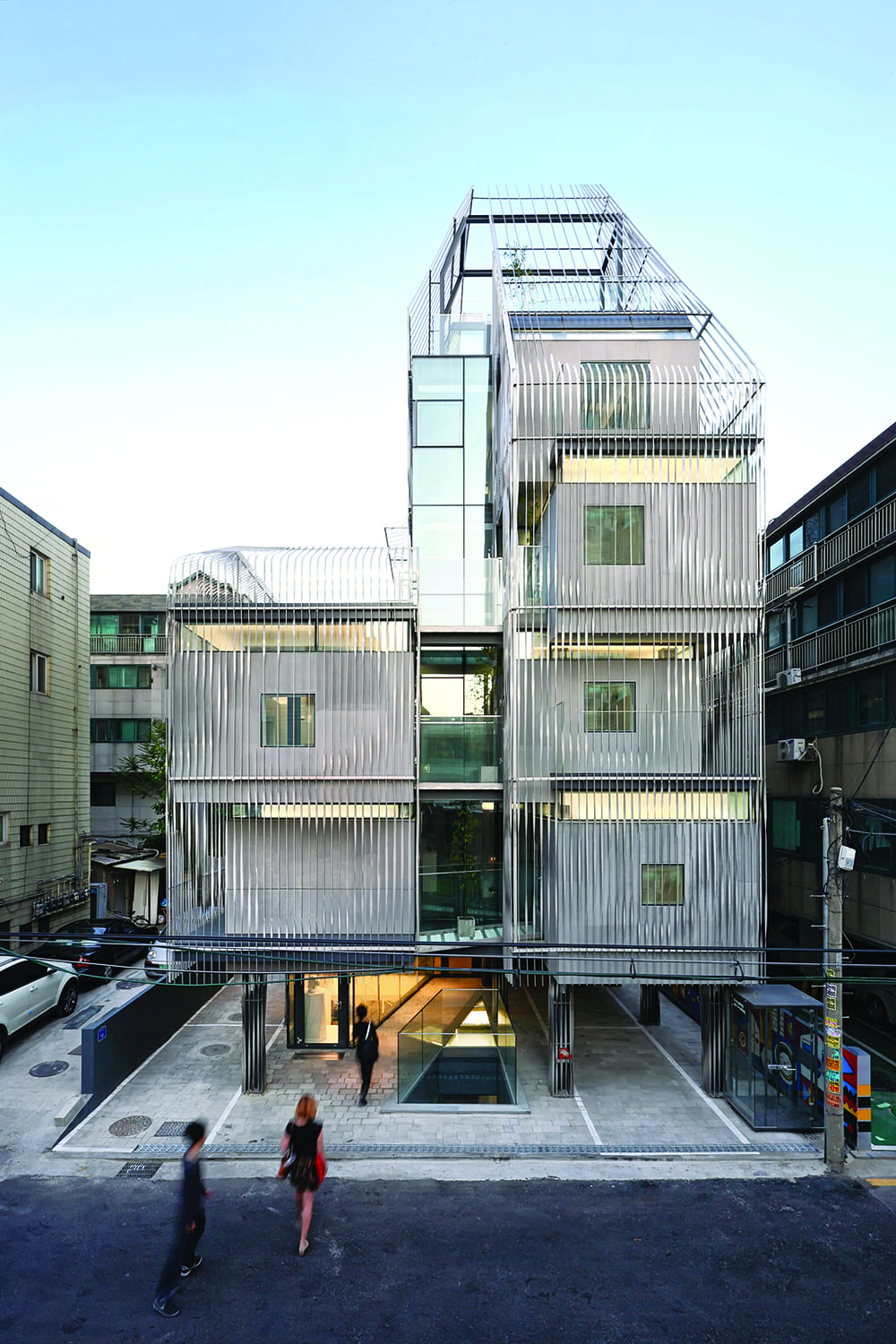 The 14 units in Seoul’s Songpa Micro Housing are as tiny as the city’s zoning code permits: a mere 120 square feet (11 sq m). To mitigate the constraints of the small size and promote interaction among residents, the designer—the Seoul office of SsD—figured out the discrepancy between the maximum zoning envelope, the maximum floor/area ratio, and the minimum unit size to allow for as much residual semipublic space around each unit as possible. SsD dubbed this “tapioca space,” after the gel surrounding a tapioca pearl. Seating in corridors and access to natural light and air turn these into flexible social spaces for residents.

Zoning rules also required parking space on the ground level, which the designers configured to double as gathering space. An open light well at street level brings daylight into the basement toy store and café. Wide steps down to the café double as a “micro auditorium,” with seating for residents and customers, and the second floor houses art galleries. On the exterior, the structural steel frame functions as a privacy screen, trellis, and guard rail while also concealing gas pipes and electrical conduits. The project was completed for local developer Chanill Lee in 2014. 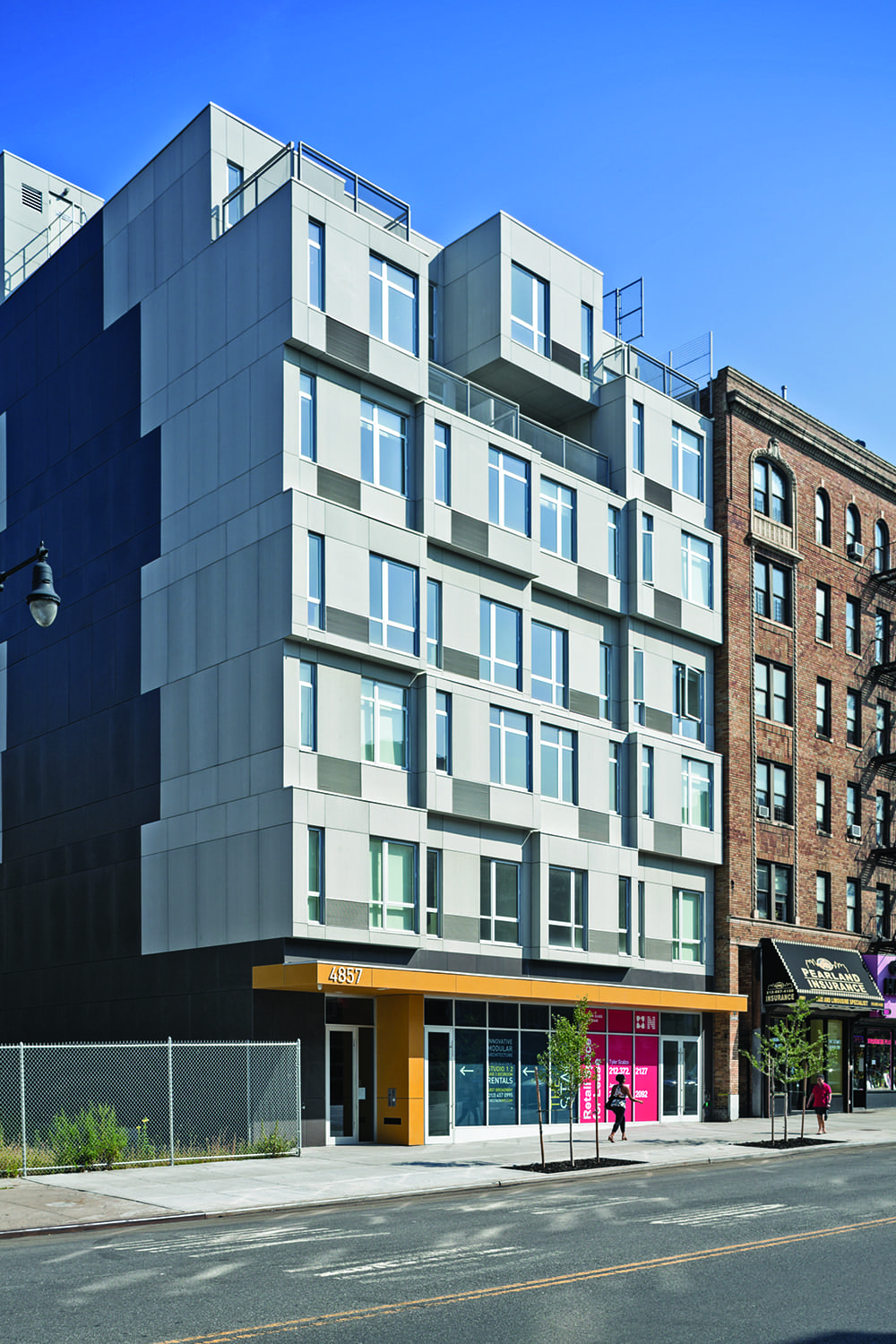 To shorten the construction schedule and thereby cut costs for a seven-story residential building in upper Manhattan, local architecture firm Gluck+ and local developers Jeffrey Brown and Kim Frank opted to take advantage of modular construction. Fifty-six modules were prefabricated and factory-finished off site in Brooklyn while construction workers poured the concrete foundation. On top of the first floor, which houses commercial space, the modules were stacked to form 28 residential units, ranging from studios to three-bedroom apartments. The process took ten months, shaving six months off the construction schedule for a traditionally built multifamily residence of the same size.

Completed in 2014, the individual apartments were pushed back or pulled forward slightly to vary the street facade. A central courtyard brings in natural light, and many of the units have private terraces and outdoor space. Twenty percent of the units are designated as affordable.