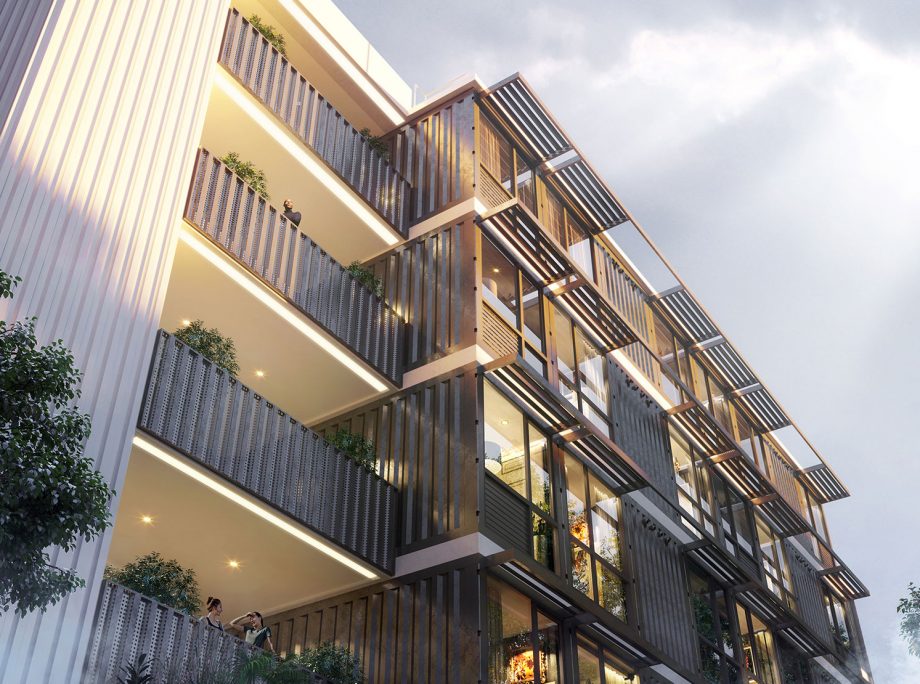 After the concrete base was built, it was a quick process to construct the housing units in this new development. In Los Angeles, where tens of thousands of people experience homelessness on any given night, a new supportive housing project has just contributed 84 homes to help get people off the streets. Thanks to modular construction and a replicable design, hundreds more of these homes are on the way.

Factory-built steel modules were used to construct the new housing project, called Hope on Alvarado, which has on-site services, full-time counselors, rooftop gardens, and a courtyard. Three more projects based on this design will break ground later this month. After the concrete base was built, the process of constructing the housing units was fast, with the steel modules craned into place in just four weeks. The project, though, has been in the works for years. In 2016, architect Mark Oberholzer got a call from a developer looking to build permanent supportive housing for formerly homeless people. The developer, Aedis Real Estate Group, wanted to use premade shipping containers for the project’s structure. “I said, ‘That’s great, but it’s going to cost you more and it’s going to take you longer,’” says Oberholzer, an architect at KTGY Architecture + Planning. Despite the appeal of the steel shipping containers, sourcing and adapting them to be used as housing isn’t as straightforward as it seems, and can take longer than traditional concrete and wood construction. A simpler option, Oberholzer suggested, was to use modular steel—similarly box-like metal building blocks that could be more precisely designed to be used as housing. The developer agreed.

Modular construction is becoming a popular way to quickly build affordable and supportive housing. A similar project in Toronto went from the drawing board to completion in eight months. Though the modular part of the project was quick to construct, Hope on Alvarado ended up taking much longer to design and manufacture. “Everybody, including the architects, the engineers, and the manufacturer, learned so much,” Oberholzer says. He counts about 20 different lessons learned during the process, from figuring out the most efficient way to create apartments from similar module forms to eliminating unnecessary utility connections between modules. “It was learning by doing, which is maybe the most painful way to learn, but you learn it through direct experience,” he says.

The deliberate pace ended up paying off, as these lessons have already been applied to other projects. Aedis Real Estate Group is building supportive housing projects across Los Angeles, adding about 200 more units to the city’s supply of housing for the formerly homeless population. “We’ve got three more breaking ground and the developer doesn’t even question the system,” Oberholzer says. “Clearly it’s the way to go for this group.”

Oberholzer says his firm has at least a dozen other modular projects at various stages of design and development, and that the developers of Hope on Alvarado are aiming to build three to five similar supportive housing projects per year. Though the first project ended up taking longer than if it were conventionally built, the next three could be finished in less than half the time. Says Oberholzer: “I think it’s a testament to the fact that it was really an exercise in perfecting a prototype.”